Commercial Integration between the European Union and Mexico

The economic integration between the European Union and Mexico is of strategic significance to both parts. The EU is Mexico’s second most important trading partner and an integral piece in the diversification of its economic dependence from the United States. Besides, as Mexico is part of the North American Free Trade Agreement NAFTA and due to its geographical proximity to the United States, it has become of major geopolitical interest to the European Union. This multidisciplinary book analyzes the integration between Mexico and the European Union by economic, legal, and business management aspects, trying to contribute to a profound understanding of their relations.

In recent years, Regional Trade Agreements (RTAs) have been multiplying and becoming an important trend in world economy (Ghosh C. & Yamarik. 2005). According to WTO, in 1990 only 107 RTAs were registered at the organization and by December 2008, 421 RTAs were notified. Of this number, 90% are partial-scope free trade agreements (FTA) and approximately 10% accounted for customs unions1. This proliferation of RTAs is influenced by the lack of substantial advances in the Doha Round of the World Trade Organization (WTO), given by the complexity processes to negotiate bilateral agreements as opposed to multilateral agreements.

The proliferation of RTAs has led to discussion based on the real impact on trade and well-being effect of these treaties. Robinson and Thierfelder (2003) argue that RTAs have had a positive effect on welfare, besides there is supporting evidence submitted by investigations that showed a dominance of trade creation over trade diversion. In contrast, Bhagwati and Kruger (1995) and Bhagwati and Panagariya (1996) question the efforts to negotiate increasing RTAs, but the real outcomes seem to be uncertain. This argument is consistent with the vision of Economics Nobel Laureate, Joseph Stiglitz who holds that Free Trade Agreements are meant to eliminate tariffs, quotas, restrictions and subsidies, but in reality things are different, and they are affecting some sectors in developing countries that benefit from other countries sectors as well.

In addition, he states that the real consequences in Latin America, are quite negative, because of the fundamental principle of non-discrimination that has been neglected, causing that Free Trade Agreements in the continent are neither free, nor fare (Stiglitz, 2006).

In terms of Mexican diversification exports, FTAs have not been successful tools as expected. The present chapter includes a portrayal of the Mex-EU FTA characteristics, including a description of the liberalization process for industrial and agricultural industries. Besides it is also analyzed the real commercial benefits for Mexico and trend examination of the Mex-EU FTA before and after the commercial agreement. Finally, this chapter will focus on detail in the agricultural sector.

According to the original text “Globalization for All: The EU and World Trade: Europe in Movement”, published by the Directorate General of Press and Communication for the European Commission in 2002, the EU first 15 Members represent only 6 % of world population, and more than 20 % of international trade, making the EU one of the major commercial players in world trade. Given the economy’s size and its consumption capacity, it is easy to visualize the importance of this region for Mexico.

In Brussels, on December 8 of 1997, the “Economic Association Agreement and Political Cooperation (Acuerdo de Asociación Económica, Concertación Política y Cooperación) was signed between Mexico and the 15 members of the European Union. However, it was not until February 23 in Lisbon and on February 24 in Brussels of 2000, that the European Council approved the agreement. In Mexico, the agreement was signed by the Senate Chamber on March 20 of the same year. In this document was stated that the Mexican-European Free Trade Agreement (Mex-EU FTA) would enter into force on July 1, 2000. This agreement replaced the Framework Cooperation Agreement (Acuerdo Marco de Cooperation) between Mexico and the European Community signed in Luxembourg on April 26, 1991.

← 62 | 63 → By 2000, Mexico had already signed six FTAs including the North America Free Trade Agreement (NAFTA). However, with the European Union, Mexico negotiated a much broader agreement. Besides there are some aspects usually negotiated in FTA’s such as the removal of trade tariffs, investment and the movement of capital, competition, national treatment to service providers, intellectual property, among others; this FTA included other features like economic and political cooperation topics, cooperation for scientific and technological research in different sectors, cooperation for the establishment and strengthening of small and medium-sized enterprises (SMEs), including the creation of funds for this purpose, also cooperation in the field of training and education and social affair, strategies to overcome poverty and finally cooperation on human rights, democracy and health.

Unlike previous FTAs signed by Mexico, this agreement dealt with economic and politic cooperation in an attempt for a stronger Mexican integration with the world. The negotiations of this agreement, contemplated three elements: (1) trade of goods and services, (2) economic cooperation for development, and (3) political cooperation and democracy. Because of the latter two elements, this agreement is considered an “Agreement of Economic Partnership” (Acuerdo de Asociación Económica) in which, the FTA is only one of the three components of the Mexican-European Union Agreement of Economic Partnership. Nevertheless, the purpose of this work is to describe and analyze the commercial component, focusing on the analysis of the commercial performance, particularly the Mexican Exports to the EU.

Mexican and European Union representatives, agreed to establish a free trade area within a maximum of ten years since the entry into force of the agreement. In spite of this period established in the Mexican-EU FTA negotiation, the EU eliminated most of the customs tariffs on imports from Mexico in 2003, while Mexico eliminated most of the custom tariffs on imports from the EU in 2007. For the European Union, the benefits of the agreement should be the same, as those established with the NAFTA partners. 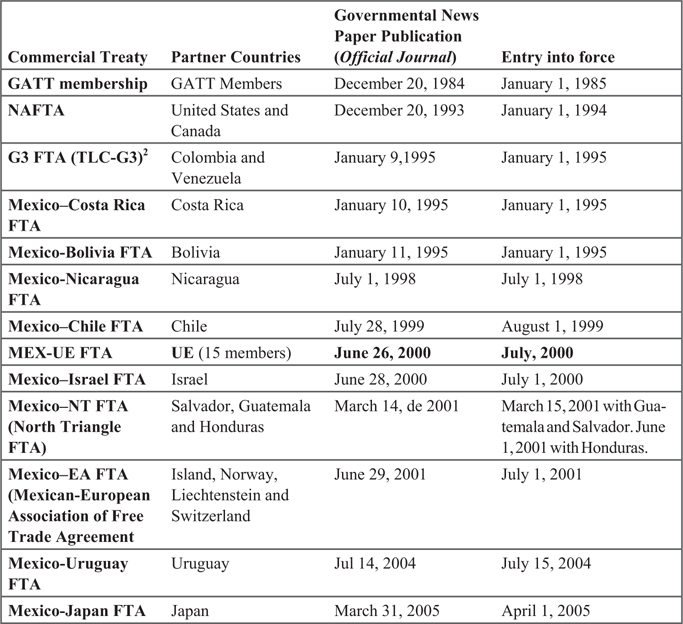 ← 63 | 64 → Nonetheless, in other cases of FTAs, a Joint Council (JC) was established between the two governments of this agreement; it was charge of negotiating and monitoring processes. In addition, the JC elaborated eleven chapters as core references for different interest groups in Europe and in Mexico. These chapters became the main framework for the negotiation process due to the domestic concern expressed by both parts involved. It is important to mention, that the JC also established different bi-national commissions, such as agriculture, auto parts and electronic among others. Nevertheless, in any other FTA, the Commission based the product liberalization process on the Harmonized System (HS)3.

← 64 | 65 → Here are presented the chapters of the Mexico-European Union Free Trade Agreement:

For the trade liberation process, the Mexican-European bi-national commissions conducted an analysis of the Harmonized System (HS) classification to address categories for each product. These categories were represented by numbers and letters for all products subject to trade between the European Union and Mexico. Industrial products were categorized by letters; and agricultural, farming and fishery products by numbers. Depending on the situation, this classification and product analysis was made according to economic and political interests of the parties, besides it serves as the basis to negotiate the tariffs and in most cases its elimination. In the case of Mexico, its representatives established letters “A”, “B”, “B +” and “C” to categorized all industrial, manufactured and mineral products; in other words, this classification was used for all those products that are not cataloged ad agricultural and fishery products.

For those products (industrial, manufactured and mineral products) European representatives established only two categories: “A” and “B". Therefore, in the European market, all products not classified as agricultural, farming or fishery goods, have only two schemes of tariff reduction, while in Mexico they have four.

The first four sections of the HS refer to agricultural and farming products, including chapters 1 to 24. These products were classified into seven categories, also listed by numbers. As it can be seen there are more categories in this kind of products due to their important political influence, complex negotiation process, and classification possibilities that respond to different economic and political sensitivities.

General objective: To create a commercial space in the context of multinational integration through the establishment of a free trade zone for the opening of external development opportunities.

Gerhard Niedrist holds a doctorate degree in international law from the University of Salzburg (Austria). He has worked as a fulltime Research Professor at the Master in International Law at the Tecnológico de Monterrey (Mexico) since 2007. He has published several works on economic integration.