The Economics of International Environmental Cooperation

The Economics of International Environmental Cooperation looks at environmental issues calling for international cooperation, such as river management, transboundary air pollution and climate. It analyses methods used to reduce free-riding in protecting the commons and discusses agreements considered successful – such as the Montreal Protocol – and others that are less effective. In the absence of a supranational authority to enforce solutions in the interest of larger regions, voluntary agreements need to be negotiated by independent agents. They should pass not only aggregate cost-benefit tests, but they have to meet additional criteria in order to win the support of those who cooperate. The book analyses different agreements and draws policy conclusions.

“Nature does not respect political boundaries”. This is no doubt a true statement, but its real meaning is vague. To be sure, nature cannot be appropriated by a single nation. But what are the practical consequences of this fact?

This book on international environmental cooperation confronts two points of view: natural and economic. According to the natural viewpoint, all borders – so carefully protected by us – are artificial and damage the cause of environmental protection rather than further it. On the other hand, according to the economic viewpoint, borders are necessary; they are inevitable elements of our political systems. They allow societies to enjoy stability and maintain justice. Within borders, we try to make sure that foreign citizens do not draw from our pension systems, and we pressure governments to financially and politically support companies that export products.

The co-existence of these two orders is inevitable. Yet it is worthwhile to analyse the ways in which sovereign entities – such as nation states – join forces when solving problems that cannot be solved locally, i.e. problems that call for cross-border cooperation.

Many governments and international organizations extol the Subsidiarity Principle, which states that decisions should be taken at the lowest possible level that is adequate given the nature of a so-called externality problem. There would be little sense in asking an international organization to protect the landscape in any single given location; local authorities are capable of coping with such problems. By contrast, effective protection of the Baltic Sea requires the cooperation of the Baltic states; effective protection of the air in Europe requires the cooperation of the entire continent; and protecting the ozone layer cannot be effective unless all countries cooperate.

International environmental cooperation is therefore inevitable for solving some problems. It is necessary when local solutions are either impossible or inefficient from a global perspective. This impossibility is linked to what economic theory refers to as public goods. If a piece of the natural environment cannot be appropriated by a single region, then a sort of a “joint responsibility” applies. One can do something about this piece, but the outcome depends on what others do. The lack of effectiveness of climate protection measures in the absence of a global agreement to limit greenhouse gas emissions serves as the best illustration of the point in question. Likewise, solving the “acid rain” problem by erecting higher stacks is an example of a relatively inexpensive ← 1 | 2 → method of lowering local sulphur and nitrogen depositions at the expense of neighbouring countries. Economists see this as a textbook externality case: overall efficiency is compromised by transferring damage from one place to another.

Economic efficiency – synonymous with maximizing a positive difference between benefits and costs – remains an important focus of economic analyses. Seen from such a point of view, international environmental cooperation is not an entirely new domain of economic inquiry. Nevertheless, what requires special attention is the asymmetry between benefits and costs perceived by sovereign states as economic agents. This asymmetry can be spotted at the local level, too. In a typical polluter-pollutee system, the former gets rid of a problem by transferring it to the latter. In a typical public good system – e.g. protecting a forest – a protecting agent finances a project from which other agents benefit; the latter may nevertheless pretend that they are not interested in protection, especially when they know that this protection is financed by somebody else, which means that they can benefit for free. In such cases, a solution can be implemented by the government that enforces what is justified by economic efficiency and/or fairness.

Environmental economics is about striking a balance between protection costs and benefits. Under standard assumptions, this balance is reached when the marginal costs of abatement are equal to its marginal benefits. The benefits may be enjoyed by agents other than those who incur the costs. But the role of the government is to make sure that the difference between total benefits (whomever they accrue to) and the total costs (whoever pays them) is maximized, as envisaged on a figure that can be found in any textbook on environmental economics. Costs and benefits (p) are measured along the vertical axis, while the level of environmental protection (e) is measured along the horizontal one. The low level of environmental protection e* is what can be expected if polluters are free to do whatever is most convenient for them, i.e. to avoid any costly activities. In contrast, e0 is what maximizes the difference between total abatement benefits (TAB) and the total abatement costs (TAC). Under standard assumptions, this is where marginal abatement benefits (MAB) are equal to marginal abatement costs (MAC). ← 2 | 3 → 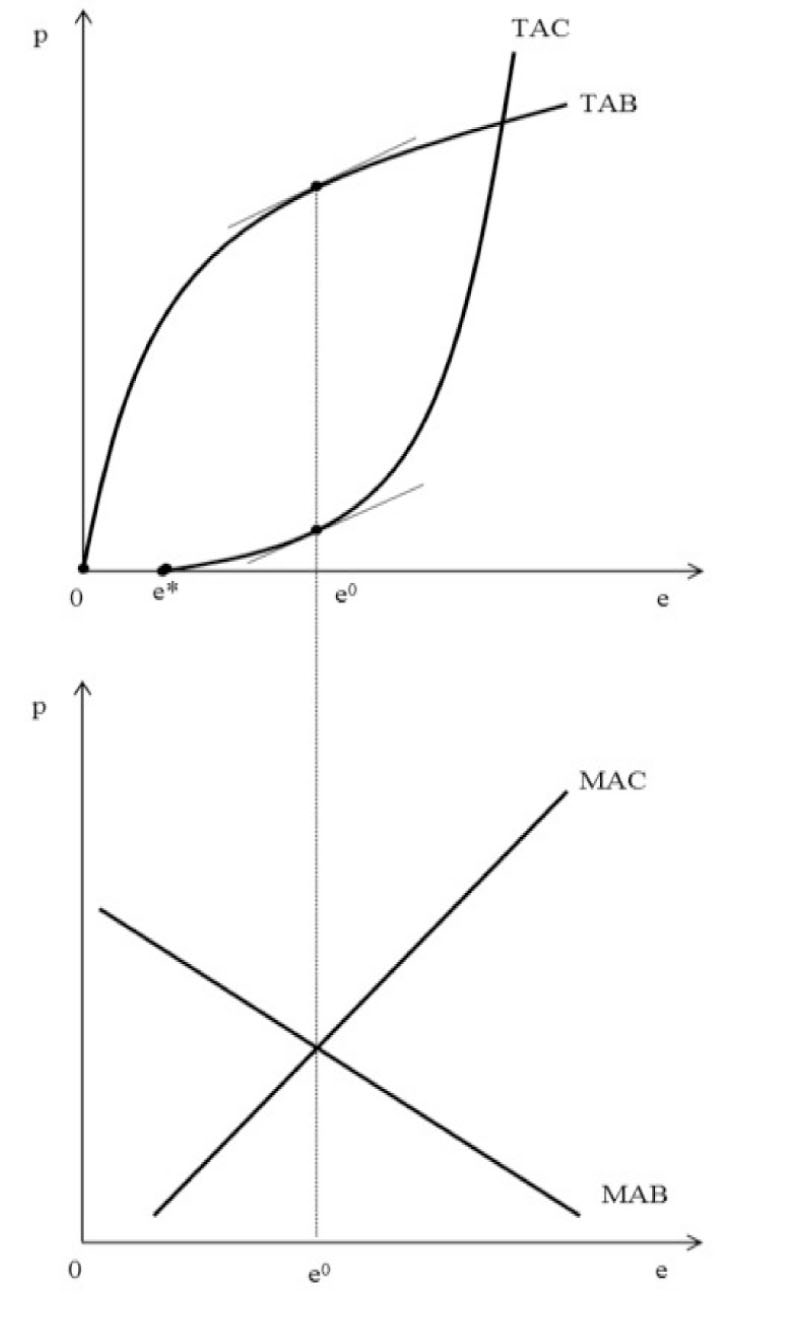 Yet in situations when environmental protection requires the cooperation of sovereign countries, there is no government that can mandate anything. And this is the core of international environmental cooperation. Theoretical analyses demonstrate that a solution can be arrived at by reducing external costs or undertaking common endeavours for the common good. But how can this be achieved? How to encourage a sovereign country to make an effort that it would not undertake spontaneously?

Some steps can be enforced by a military action. Over the last several thousand years, there have been wars aimed at forcing somebody to do something that they would have not undertaken voluntarily. Analyses exist that interpret wars fought during the last decades as wars for cheap energy. Some analysts predict that wars in the 21st century will be fought over access to fresh water. Thus, it is possible to look for environmental motives of some wars, though the actual ← 3 | 4 → implementation of environmental protection usually does not require military force.

Choosing a socially justified environmental protection level requires comparing broadly understood costs and benefits. The analysis may demonstrate that what is justified for a group of countries may not be justified for a single country. The very definition of optimality implies that the surplus of net benefits of winners is higher than the deficit of net benefits of losers. Consequently, the winners can afford to compensate the losers and still be better off. This justifies international environmental cooperation supported by compensating the losers by the winners in order to jointly undertake something that is beneficial for all, which is a variant of a general principle of environmental policy in a single country where the government enforces solutions justified by a surplus of total benefits over total costs. This does not necessarily imply that winners pay compensations to losers directly. The losers may tolerate their fate because they appreciate the benefits of operating in a country where somebody else wins.

Indeed, some examples of international environmental cooperation are linked to compensations. These do not have to be direct or transparent. There are cases where a sovereign state accepts an environmental commitment which implies a net loss. In order to understand this paradox, one needs to analyse the broader context of a particular agreement and presumably discover that, at the same time, the state negotiated another agreement where it was a winner; thus, the two decisions should be studied together.

Sometimes we encounter self-enforcing agreements. Parties to such agreements find it more beneficial to stay rather than to move out of a respective coalition, which is how analysts explain the success of the Montreal Protocol protecting the ozone layer, or the participation of some countries in the Polish Debt-for-Environment Swap. Losses from leaving a coalition do not have to be linked to economic (or military) sanctions; they may simply be linked to losing benefits that come with participation. How to bring together a “critical mass”, i.e. to collect enough participants so that the agreement becomes self-enforcing, remains an open question. This, however, depends on particular environmental problems.

Tomasz Żylicz served as Dean of the Department of Economic Sciences at the University of Warsaw. He was a visiting scholar in Colorado and Stockholm and has received several awards for his work. Tomasz Żylicz is the founder of the Warsaw Ecological Economics Center.