This book outlines a coherent genre history of the personal weblog from the perspective of media linguistics. An analysis of a diachronic corpus (1997–2012) suggests distinct phases in the history of the genre. In addition to media linguistics, the author draws on methods from textual and corpus linguistics as well as the social sciences. He traces the personal weblog’s various relations to different on- and offline genres and describes the blog communication form as well as the communicative situation, structural features and several posting genres characteristic of personal weblogs. The findings are embedded into theoretical considerations on genre change in general as well as stability and change of web-based genres in particular.

0.1 The Right Time for a History of the Personal Weblog

Imagine being able to find out what’s *really* going on in anyone’s life. What if everyone wrote about their issues. We could all learn from each other. Friendship would mean a lot more. We could grow more quickly, accomplish more in our lives, live more richly, have more fun. (Dave Winer 1995 in Rosenberg 2009: 53)

No one in Winer’s personal environment could believe back then that this vision might turn into reality only a couple of years later. At that time, it was simply impossible to imagine that millions of Internet users worldwide would keep their own websites in order to make their thoughts and experiences public and exchange their views with others. After all, the World Wide Web (WWW) of 1995 – only initiated a couple of years before by Tim Berners-Lee – was mainly a playground for enthusiasts who were excited about new developments and informed each other whenever they found something new. And there was something new literally every day – more and more users got involved in investigating the exhilarating potentials of the WWW. Eventually an abundance of new forms of communication emerged: Chats, discussion forums, personal and corporate websites, FAQ-sites – and blogs. 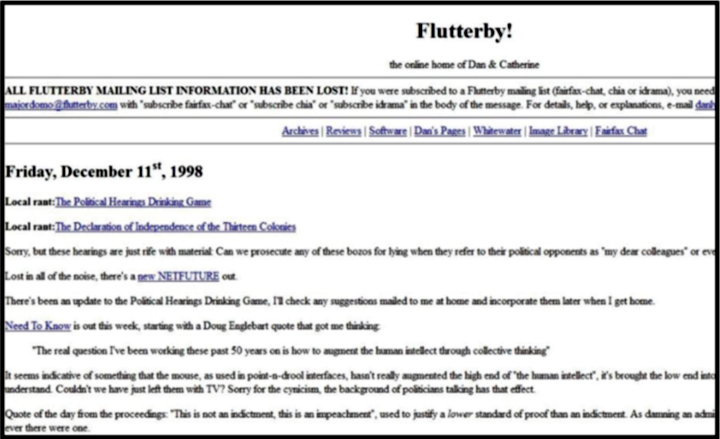 Blogs, still called weblogs back then, emerged in the second half of the 1990s. A typical weblog of these early days is shown in Example 1. However, what comes to mind first when reading the term personal weblog is probably more similar to Example 2. This example shows a personal weblog and therefore a form of blogging that developed several years after the first weblogs of the mid-to-late 1990s. The personal weblog is probably “the best known, perhaps the prototypical representative of the species [blog, P.S.] in public awareness” (Mauranen 2013a: 7) and can be defined as follows: 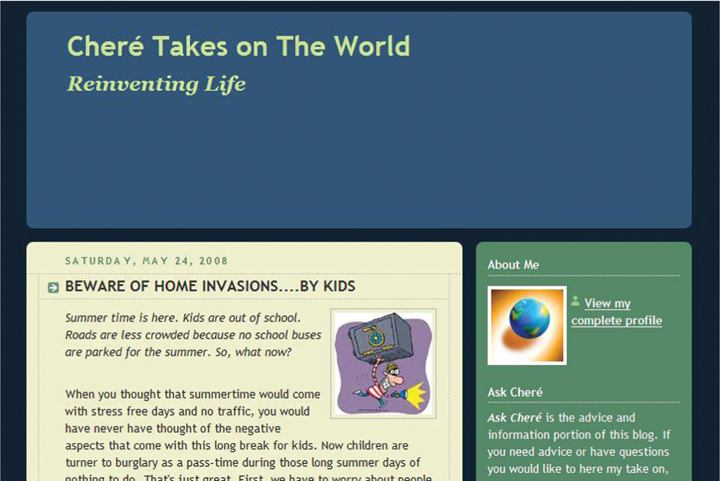 The personal weblog is a weblog that typically deals with the everyday life and personal matters of the author. It can also be about a specific hobby or dedicated to expressing the author’s opinion, if this entails an element of self–reference and/or self–disclosure. Further, the personal weblog has an intimate, sometimes confessional, style where the author provides the readers with subjective representations and reflections on the topic discussed. Finally, the personal weblog can be more or less densely networked with other weblogs, and through the author’s self–disclosure and intimate style, it facilitates rather symmetrical communication with the readers and commentators. It is particularly supportive of strong ties in the sense that the relations between the author and the readers are more than just informational. (Lomborg 2009: n.p.)

The fact that many reading these lines have probably already encountered a website that could, according to Lomborg (2009), be labelled personal weblog shows ← 16 | 17 → that this genre has had significant impact on the genre landscape of the WWW. In addition, the personal weblog looks back on a history of roughly 15 years at the time of writing this book – even close to 20 if the weblog-beginnings of the mid-to-late 1990s are also counted. On the web, this is a very long time. Personal weblogs have seen many developments come and go, they were Web 2.0 before the concept even existed (Schildhauer 2015: 194) and later, most importantly, have successfully competed with rivals such as Facebook and Twitter. What makes the genre even more interesting are its manifold relations to other established genres: The diary, which has been proposed as the ancestor of the personal weblog,1 is, in fact only one of many – both on- and offline. This turns the personal weblog into an interesting subject for everyone affiliated to research in genre, genre relations and genre change. Most intriguingly, the personal weblog provides us with the rare opportunity of documenting not only genre change but also genre birth.

Of course, there are numerous studies which investigate blogs (and personal weblogs in particular) from various angles. However, since Herring et al. (2006), there have been no linguistic studies on the history of blogs. If blogging history is mentioned (e.g., by Miller & Shepherd 2009; Mauranen 2013a: 13), it’s usually the history as told by bloggers themselves (e.g., Blood 2000). While this view from within is certainly important, and is also taken into account in the present book, we should not neglect the actual blogs themselves, investigating what bloggers do on personal weblogs, in what way and how this changes, or doesn’t change, over time. Certainly a lot has changed as far as Examples 1 and 2 are concerned – but much also remained stable and is not apparent at first glance.

After 15 (or 20) years of blogging, then, this is the right time for a linguistic history of the personal weblog. The genre has many interesting stories to tell and this book would like to share at least some of them – from a media linguistic point of view.

This book is based on my PhD thesis, which I defended in summer 2014 at Martin-Luther University Halle-Wittenberg (Schildhauer 2014). However, I planned the present book not only as a translation of that thesis but also saw it also as an opportunity to provide a more readable, concise, revised and updated account of the history of the personal weblog. With this in mind, I took several ← 17 | 18 → shortcuts and also left aside much of the methodological argument provided in my PhD thesis; this was aimed at satisfying the requirements of a committee, not the curiosity of a reader merely intrigued by the subject. Where appropriate, I will reference relevant passages in Schildhauer (2014) for those interested in a more elaborate argument.

This book is divided into three parts. Part A introduces the background of the study presented here and gives an outline of its theoretical framework, method and research corpus. Chapter 1 approaches the concept genre from several angles. As genres are complex phenomena, this chapter introduces the descriptive dimensions communication form, situation, function and multimodal structure, which will be used later to describe several aspects of the personal weblog in a structured way. This chapter also develops a model suitable to describe genre change and introduces several types or patterns of genre change as necessary tools for the linguistic history of the personal weblog. Many of the considerations in chapter 1 are illustrated with examples from the research corpus this book is based on. This corpus is called DIABLOC (diachronic blog corpus) and is described in detail in chapter 2. Chapter 3 closes part A with some general remarks concerning methodology. This chapter is rather short as I provide only an outline of the general methodology here. Each chapter of the main part is introduced by a section entitled What I Did | What I Read, which reviews research relevant to the topical section and methods leading to the results presented in the respective chapter.

Part B addresses each of the descriptive dimensions introduced in chapter 1 in turn. It opens in chapter 4 with an account of the blog communication form (that is, technology and software which blogs are based on). Chapter 5 addresses several parameters of the communicative situation of personal weblogs such as authorship (5.5 and 5.6), the bloggers’ ideas about their audience (5.7), communicative maxims guiding the production and reception of blog posts (5.8) and others. Chapter 6 then turns to structural concerns, for instance layout and design (6.3.1), language use (6.4.2), image types (6.4.3) and language-image links (6.4.4). The results from chapters 4 to 6 are fused in chapter 7, which deals with the purposes of blogging. This chapter first describes several types of blog posts (7.2 to 7.5) and then moves on to investigate their frequencies (7.6).

Part C provides a synthesis of the results from two different perspectives. Chapter 8 draws on the previous chapters to provide a concise history of the personal weblog, including the weblog as its online-ancestor. While the chapters 4 to 7 are, in fact, separate histories of several related aspects of the personal weblog, these are brought together for a coherent account in chapter 8. Chapter 9 addresses issues of more theoretical concern. 9.1 turns to the question of why genres change and shows how Keller’s (1990) Invisible Hand Theory can be applied to ← 18 | 19 → some phenomena of the history of the personal weblog. Chapter 9.2 broadens the view to stability and change of web-based genres in general and situates the present book in the respective research landscape. Chapter 10 closes this book with a summary and questions for further research, as much remains to be done both regarding the personal weblog and the history of web-based genres in general.

1 The Dynamics of Genre

The question of what constitutes a personal weblog is only seemingly straightforward. Indeed, there are several perspectives which could be and have been taken into account, for instance:

• Is a personal weblog about its set-up as a dynamic web page with new entries appearing on top first (Schlobinski & Siever 2005a: 9)?

• Is a personal weblog characterised by a special relationship between blog authors and their readers, forming micro-communities of shared interest (Mauranen 2013a: 13)?

• Is it a diary-like practice of sharing personal experiences (Schildhauer 2013)?

In the course of this book, it will become obvious that the personal weblog is all of this at once and more (see, for example, Lomborg 2009 cited above). Without anticipating too much of what will be dealt with in the following chapters, we can draw a preliminary conclusion: the personal weblog is a complex subject which has to be approached from various angles.

The concept of genre, which “has made remarkable ascent in linguistic theory in the past 20 years” (Heyd 2008: 191), provides an appropriate lens through which this complex subject can be studied. Genres are, in fact, a fusion of all aspects addressed by the questions above: structure (for example, arrangement of entries on a blog-page), situation (for instance, authors and their readers) and the function of a particular and recurrent kind of language2 use such as sharing personal experiences (Devitt 2009: 30). In what follows, I will highlight important facets and current trends in the discussion of the genre concept. In order to do so I will draw on several strands of research:

• The “New Rhetoric” tradition following Miller’s (1984) seminal article Genre as Social Action: Genre researchers who can be subsumed under this label (e.g., Bazerman 1994; Berkenkotter & Huckin 1993, 1995; Swales 1990 and others) are convinced that genres are essentially social and cultural phenomena (see also Luginbühl 2014b: 25).

Peter Schildhauer studied gymnasiales Lehramt (German/English) at the universities of Halle-Wittenberg and Newcastle (UK). His research interests lie in the fields of text- and media-linguistics, computer-mediated communication and digital education. He works as a lecturer at the German department of the University of Halle-Wittenberg and is co-founder of the ejournal 10plus1: Living Linguistics.