A Syntactic and Semantic Investigation of German and English 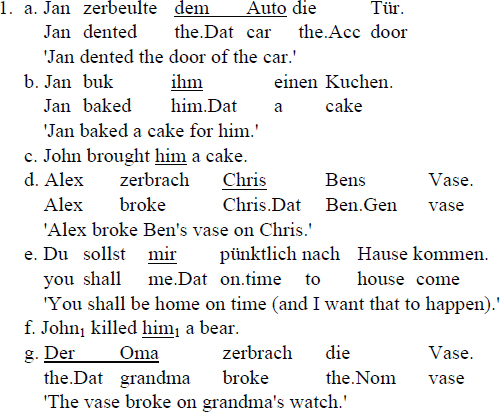 Each of these types will be described in detail to unambiguously identify and characterize that type. This is important because the different types often seem identical on first glance, especially in German.

English applicatives have also been studied before: the recipient benefactive has extensively been discussed, especially in combination with the structure of ditransitive verbs, which they resemble. The other two types have received less attention. I provide formal analyses of all types, showing why previous analyses need to be revised.

A few other researchers have investigated applicative arguments that carry not-at-issue meaning in other languages and/or in German and English (Lamiroy and Delbecque 1998, O’Connor 2007, Halevy 2007, Gutzmann 2007, Horn 2008). These studies often lack formal analyses and do not set the discussed applicative argument in relation to other applicatives in that language. To do that is another goal of this book.

The nominal constituents I am concerned with have been called free, non-core or applicative because of the fact that they can be added seemingly freely to a sentence. This in turn is often taken to mean that when these constituents are deleted from the sentence, the sentence is still grammatical. Such a German example is given in (2).

Hole (2008) argues against using this simple omission test to determine whether a constituent should be considered an applicative argument. One reason that he brings forth is that asking whether a sentence is grammatical without a given element disregards the change in semantics that (potentially) follows from the deletion of an element. Consequently, Hole (2008) proposes the entailment omission test for free datives1.

A dative that is not governed by a preposition is free in a (simple, non-negated declarative) sentence iff the sentence without the dative does not entail that there is at least one individual3 that is involved in the asserted event ← 13 | 14 → and could be referred to by a dative expression. (Hole 2008, 1.9, my translation)

An NP Y of a simple, non-negated declarative sentence that is not governed by a preposition is an applicative argument iff the sentence without Y does not entail that there is at least one individual that is involved in the asserted event and could be referred to by Y.

In (1b), the applicative argument is also not a necessary constituent of the sentence (6). It denotes a beneficiary in (1b) but the existence/ involvement of a beneficiary is not implied in (6).

The definition in (4) rules out implicit and cognate arguments as being applicative arguments. Such arguments, underlined in (12), are not governed by prepositions. They are not necessary and may be omitted from the sentence.

b. She danced a dance.

However, these arguments are entailed in the sentences that lack them (13) and are therefore not applicative arguments in (12).

Solveig Bosse received her PhD in linguistics from the University of Delaware. She is currently Assistant Professor of Theoretical Linguistics in the Department of English at East Carolina University. Her research focuses on syntactic and formal semantic analyses of German and English with occasional other cross-linguistic comparisons.