The Spanish of the Northern Peruvian Andes

This book analyses a set of rarely described regional Spanish varieties spoken throughout much of the northern Peruvian Andes (Cajamarca, La Libertad and Ancash) from a sociohistorical and dialectological perspective. What are the main dialectological features of these varieties? Are these features the same ones that shape southern Andean Spanish, a variety formed mainly through contact with Quechua and Aymara? Which of these features are distinctly outcomes of contact with Culle, the main substrate language of the region, which was mentioned in colonial and postcolonial documents but is now extinct? How are these features linked to the postcolonial history of the region, marked by the Catholic evangelization enterprise and an «economy of plundering» based on agriculture, weaving and mining? Thorough consideration of these matters allows the author to critically assess the standard notion in Hispanic linguistics that considers Andean Spanish as a single, homogeneous code. The study sheds new light on how the regional varieties of Spanish in America were shaped over time and proposes ways of delving into language history in postcolonial contexts, where a written European language has been superimposed on a set of native codes previously lacking written traditions.

This book, which emerges from my doctoral thesis presented to the Andean Studies Program at Pontificia Universidad Católica del Perú (PUCP), aims to describe a regional cluster of Spanish dialects that have been insufficiently addressed in the literature: those spoken in a large area of the North Peruvian Andes, especially in the southern part of Cajamarca department,1 the mountainous region of La Libertad department, and the extreme northern area of Ancash department (see Maps 1 and 2 for the locations mentioned in the book). With use of a corpus mainly accumulated from five towns in this region, I will attempt to show that we have before us a collection of well-defined dialects. While this dialect group shares features with Quechua- and Aymara-based South Andean Spanish – the variety of reference and contrast – the two groups diverge based on various phenomena that must be considered under the North variety’s own logic and organization.

Likewise, following a review of the historical context in which this Spanish variety has emerged – a task that included enrichment of the available documentary evidence through examination of historic archives – I will argue that the peculiarities observed in North Peruvian Andean Spanish resulted from the complex indigenous substrate that influenced it, as well as from evolution of the Spanish system due to limited standardizing pressure within the mentioned territory, a cultural region religiously, economically, and commercially integrated from pre-Hispanic times through the end of the colonial period. During this endeavor I will subject the category of Andean Spanish – as constructed in previous literature – to an empirical evaluation, which will allow for discussion of the category’s advantages as well as its biases and limitations. ← xiii | xiv →

To accomplish these tasks, I will utilize standard concepts from dialectology and sociohistorical linguistics, as well as from the study of language contact. The examined case in particular will allow for evaluation of a theoretical proposal developed within the framework of Hispanic sociohistorical linguistics: the historic zonification of Spanish in America postulated by De Granda (1994a, 1994b), based on the economic differentiation between central, peripheral, and marginal zones of the Spanish colonial territory. Additionally, the investigation will allow for assessment of the productivity of some theoretical-methodological pillars of Andean linguistics, specifically, a detailed examination of names, quantitative and qualitative approaches to colonial documents, and the application of a philological approach to the mainly lexical data offered by these documents.

The main argument of this book has two facets: a sociohistorical dimension and a dialectological one. I will elaborate these facets of my argument separately, proposing a history of language contact in the region studied in Chapter 3 and reserving the panoramic dialect description for Chapter 4. These chapters, the central ones of the book, will be preceded by two theoretical-conceptual sections: Chapter 1 will present some crucial perspectives and ideas from historical sociolinguistics, dialectology, and contact linguistics, relating them to the Andean linguistic realm, while Chapter 2 will offer an overview of the history of the matter, and will critically examine the category of Andean Spanish as previous literature has addressed it. The closing chapter of the book, Chapter 5, will be an attempt to integrate the principal results of the analysis into a broader discussion framework, related as much to the characterization of Andean Spanish and the field of Andean linguistics as to De Granda’s previously mentioned proposal.

This book emerges from a longtime obsession and a recent surprise. The obsession involves the linguistic-cultural region of the North Peruvian Andes, whose beauty and diversity have impacted me since early family travels to Santiago de Chuco. These excursions awakened questions about names of places, food, and plants – words that sounded strange in Spanish (and, as I would later realize, also to Quechua). The surprise surfaced during ← xiv | xv → the review of the scarce literature about the Spanish of these areas, when I discovered how timidly and vaguely diverse authors named the varieties of Huamachuco, Cajabamba, and Pallasca, to which the label of “Andean Spanish” did not even appear to correspond, despite their reference to places nestled in the Andes. I began to sense then the importance of studying what I describe in Chapter 2 as “a Spanish in the dialect haze”.

Like ancient Andean trails, academic work is built from mutual collaboration and effort, something that I have been able to experience time and again during the journey that has led to this book. My thesis project advisers, Rodolfo Cerrón-Palomino and Karen Spalding, offered me their relentless support starting when my intuitions and ideas were only an index sprinkled with annotations and question marks in the margins, through the writing of this final version. The confidence placed in my work by the PUCP Office of the Vice Chancellor for Research was constant from the first field studies to the publication of this book; I thank the Vice Chancellor Pepi Patrón for this steady and resolute assistance. The Graduate School at PUCP offered fundamental support to the research process as a whole through the Huiracocha scholarship, which allowed me the time and tranquility necessary to organize and analyze the gathered data. Similarly, a residency at Newcastle University in the United Kingdom through the Santander Academic Exchange Program, allowed me to write part of the central chapters in close proximity to its abundant library and, even more importantly, close to the offices of distinguished colleagues and wise consultants, such as Rosaleen Howard and Ian Mackenzie.

I performed the fieldwork with Roger Gonzalo Segura’s diligent assistance, and many times during data organization, I relied on Marco Ferrell Ramírez’s enthusiastic and expert support. During my stays in Otuzco, Cajabamba, Cabana, and Huamachuco, important interlocutors included Luis Leoncio Flores Prado, Miguel Rodríguez Sánchez, Alfredo Mires Ortiz, Guilda Vivar, and Silvia Vergara, exceptional authorities in their respective areas of work and residency – in addition to anonymous collaborators, whose participation was, of course, crucial. My labor delving into the archives turned out to be much more successful and manageable thanks to the warm-hearted and professional support of Martha ← xv | xvi → Chanduví (Regional Archive of La Libertad), Laura Gutiérrez Arbulú and Melecio Tineo (Archive of the Archbishop of Lima), Alejandro Ramos (Historical Diocesan Archive of Cajamarca), Evelio Gaitán Pajares, Elsa Muñoz Portal, and Luz Elena Sánchez Pellissier (Regional Archive of Cajamarca).

My professors and classmates in the Andean Studies Program at PUCP constitute an unparalleled community for discussing ideas, averting errors, and improving proposals and approaches. In addition to my project advisers, I especially want to thank Alan Durston, Bruce Mannheim, José Luis Pino Matos, Carmen Salazar-Soler, and Luisa Vetter for their critical and collaborative attention. Marco Curatola Petrocchi and Claudia Rosas, program coordinators at distinct times, especially motivated my initial idea. Similarly, I have received professional support from Martha Bell in map development, and from Laura Gutiérrez, with paleographic advice.

My linguist colleagues at PUCP aided me in rectifying errors and improving various ideas. I especially thank Raúl Bendezú, Álvaro Ezcurra, Carlos Garatea, Andrés Napurí, Jorge Iván Pérez Silva, Luis Miguel Rojas Berscia, Miguel Rodríguez Mondoñedo, and Virginia Zavala. Willem F. H. Adelaar (Leiden University), as a member of my doctoral committee, and Rosaleen Howard (Newcastle University), Nicanor Domínguez (PUCP), and Jorge Iván Pérez Silva (PUCP), as colleagues and friends, read previous versions of the text or some of the chapters presented here, and they offered me valuable comments for improvement. Two anonymous reviewers for this series of Peter Lang helped to improve the content and form of the book, but the usual disclaimers apply. Additionally, Professor Adelaar, Nicanor Domínguez, César Itier, Gabriel Ramón Joffré, Juan Castañeda Murga, and Frank Díaz Pretel facilitated a review of the bibliography or offered me contact with documents that otherwise would not have been possible to access. Natalie Povilonis de Vilchez handled this translation with patience and professionalism. And of course, Rocío Moscoso, Claudia Delgado, and Rodrigo Delgado, my family, are the first motivation for this and all of my projects. ← xvi | xvii → 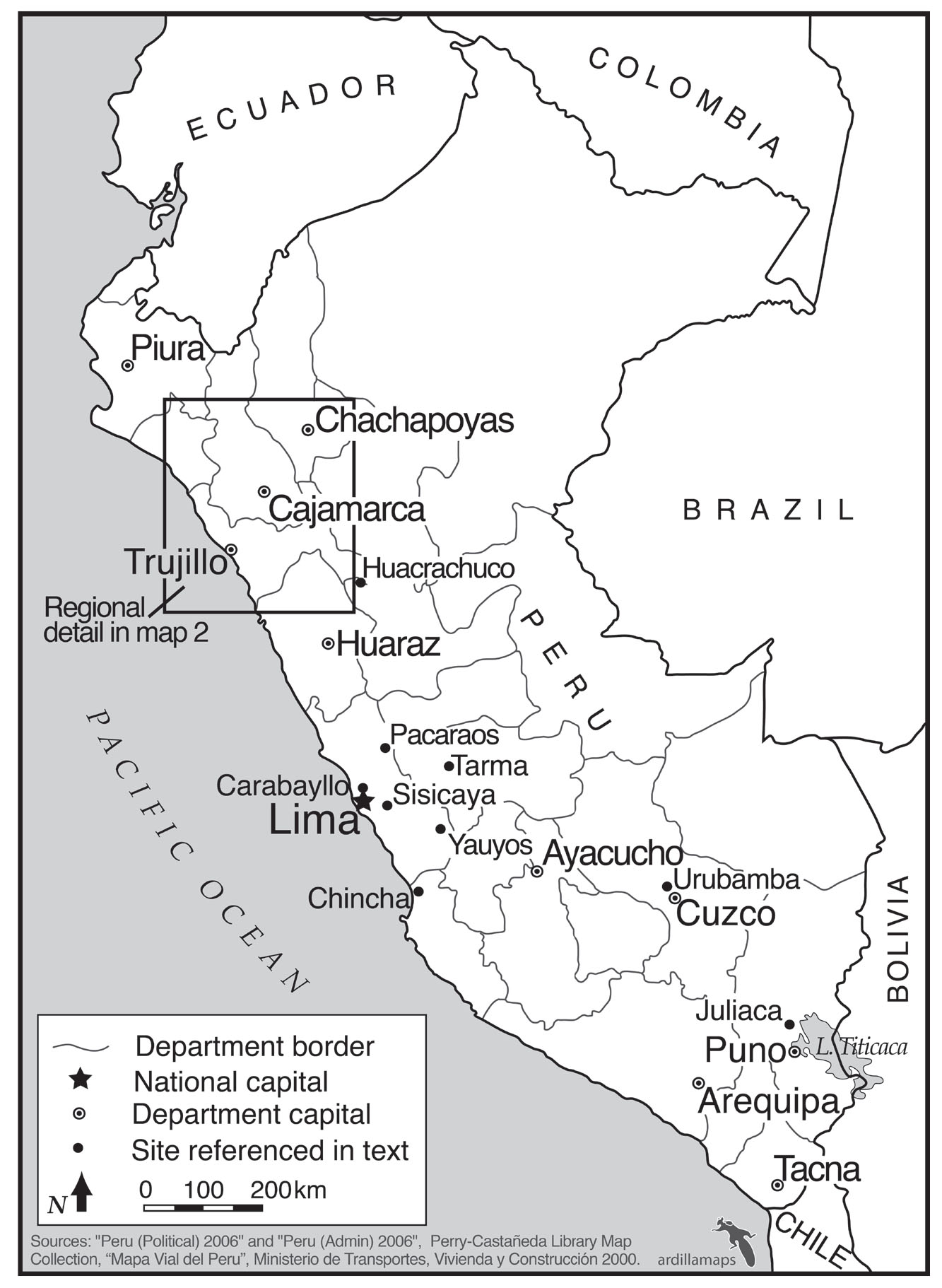 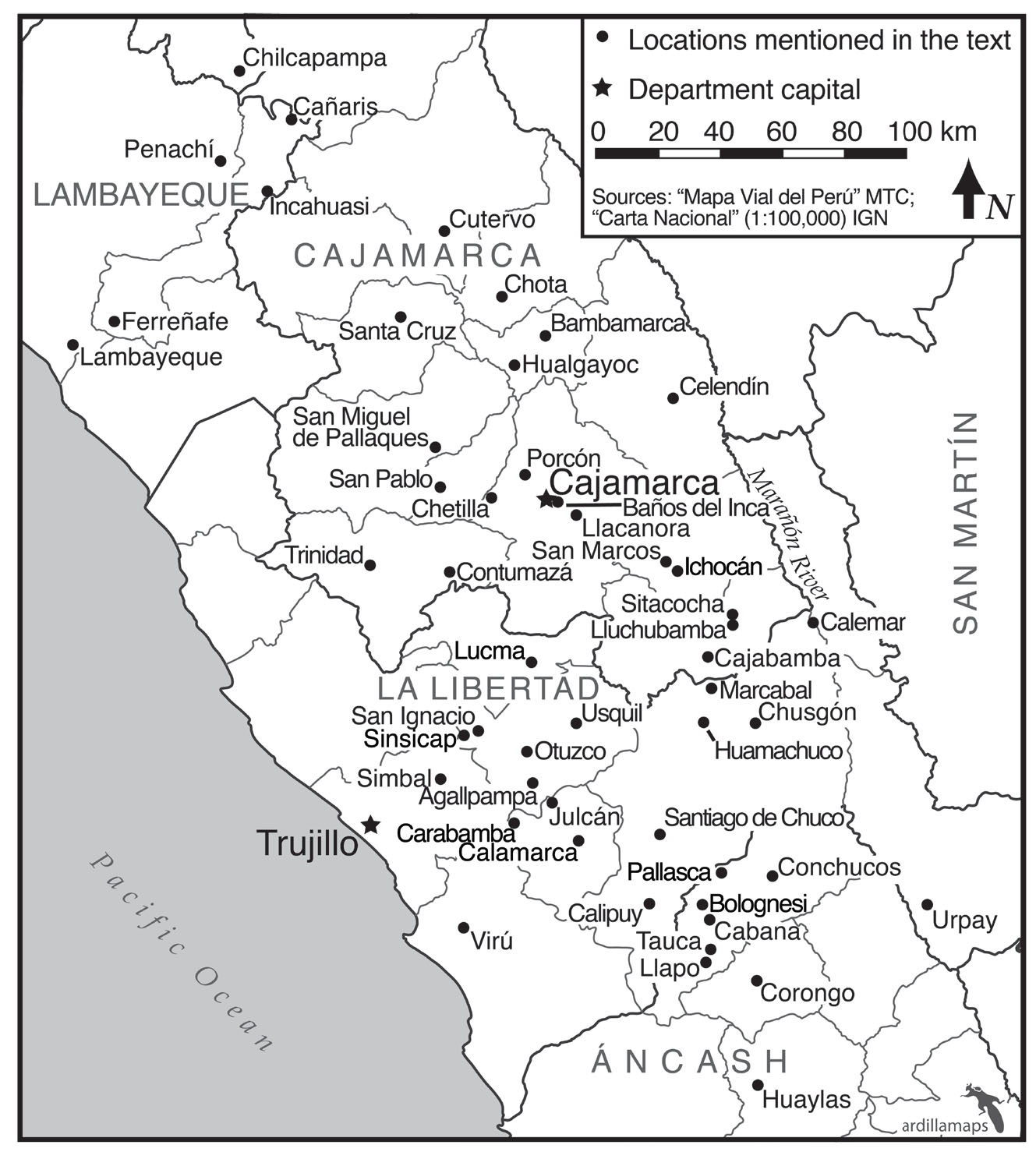 1 Politically, the country of Peru is divided into 24 departments, which are further divided into smaller provinces.