Towards a Democratic Scenario

Debates about Basque self-determination were curtailed for decades by political violence, involving both the actions of ETA (Euskadi Ta Askatasuna) and the counter-terrorism activities of Spain and France. In 2011, ETA announced a permanent cessation of operations. Since then, stakeholders have become increasingly aware of the need to rethink Basque nationhood and democratic representation in light of the changing nature of nationhood and citizenship within the European Union. These issues are also topical in the French Basque country, which has witnessed a re-emergence of Basque identity politics in recent years.
This book describes the contemporary re-imagining of Basque nationhood in both Spain and France. Taking a fresh look at the history of Basque nationalist movements, it explores the new debates that have emerged since the demise of non-state militancy. Alongside analysis of local transformations, it also describes the impact of global changes on ideas about Basque self-determination.

Figure 4.1Votes for the Parliament of Navarre (shares of registered voters)

Figure 4.2Share of votes for Basque nationalists and unionists

Table 0.1Evolution (reproduction and mutation) of Basque nationhood in Spain

Table 2.1Votes in first four elections after restoration of democracy (1979–1982) across villages in Bizkaia and Gipuzkoa

Table 4.1Subjective feelings of identity of citizens of the Basque country in Spain

Table 4.3Conditions for being able to regard oneself as Basque

Table 7.1Majority opinion of the electorate regarding diversity and immigration

This book is an output of collaborative research for the project ‘Imagined Sovereignties: Frontiers of Statehood and Globalization’, based at the Peace Research Institute Oslo (PRIO). While the project was centered in Norway, the book has emerged out of a highly interactive and grounded process. Contributors to this volume convened several times, not only for our own exchanges, but to share views and receive feedback from discussants and other participants in the workshops and conferences, and engaged civil society actors.

As one of the project’s institutional partners, the International Catalan Institute for Peace (ICIP) hosted a workshop in Barcelona on ‘Imagined Sovereignties under Construction: The Basque Country and Catalunya’ (28 April 2014), bringing together several of the contributors to this volume. Following this, the contributors and project team gathered at the University of the Basque Country in Bilbao for a joint workshop with ICIP, PRIO, and the Department of Political Science, University of the Basque Country on ‘Basque Nationhood in a Globalizing World’ (28–29 May 2014). A special session of this event was organized to invite the views and perspectives of Basque civil society, under the title ‘Imagining Basque Sovereignty: Voices from Civil Society’ (30 May 2014). Organizations present at this event were Lokarri (a citizen’s network for agreement and consultation), STEE/EILAS (a teacher’s union), Gure Esku Dago (a grassroots organization advocating ‘the right to decide’), Ekologistan Martxan (an association of socialist ecologists), Bilgune (a feminist organization), Asociación Bertsolaris (a cultural association), Grupo Astra (a cultural organization from the city of Gernika), and Ner Group (Nuevo Estilo de Relaciones, a network of businesses committed to just and sustainable human development). We would like to express our gratitude to all of the speakers and participants at these events for sharing important insights with us.

Inspired by the Bilbao conference, contributors to this volume got together again in Oñati to discuss ‘A Multidisciplinary Approach to ← xi | xii → Processes of Sovereignty Construction: The Basque Case’ (14–15 May 2015). This workshop was hosted by the Oñati International Institute for the Sociology of Law, co-organized by the Department of Political Science of the University of the Basque Country together with ICIP, the Ehugune Forum, and the research group Parte Hartuz.

The editors would like to extend our gratitude to colleagues in Oslo, Barcelona, Guwahati, Nicosia and the Basque country, and especially to the participants of the project’s conferences and seminars. We are grateful as well to those contributors who were not present at the conferences, for their hard work towards the realization of this volume. We also want to thank the anonymous reviewers of the draft manuscript for helpful feedback, and the staff at Peter Lang for excellent support and guidance. Finally, we would like to express our deep-felt gratitude and thanks to our colleague Covadonga Morales Bertrand for her continuous support, invaluable input and steadfast efforts to bring this volume together. 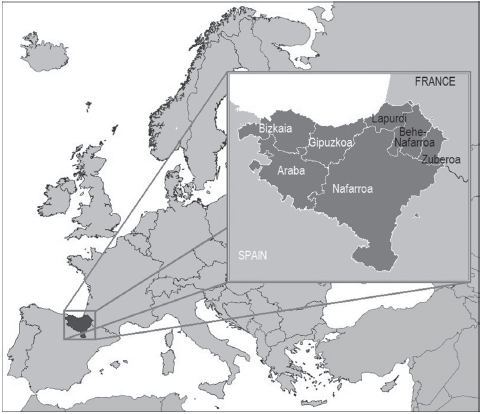 Basque Nationhood: Towards a Democratic Scenario

Common to all the chapters of this book is that they reflect on a specific national conflict – one that has a long history and is still prevailing in the Basque country. As we shall see, the chapters of this book attempt to introduce into the analysis of this conflict certain perspectives, which not only describe it in new ways, but also provide clues to its possible transformation. These perspectives are equally attentive to the historical configuration of the Basque national identity, such as the role of language in the construction of this identity, and the conflicts – both internal conflicts, and conflicts between Basque communities and the state – which have similarly shaped the affirmation of and demand for Basque sovereignty. This applies not only to what we might term the ‘main’ community of the Basque country – the one that today is legally termed the Autonomous Community of the Basque Country (Basque: Euskadiko Autonomi Erkidegoa; Spanish: Comunidad Autónoma del País Vasco) – but also to its peripheral communities: the Basque community in the French territory (Basque: Iparralde), the one living in Chartered Community of Navarre (Basque: Nafarroako Foru Komunitatea; Spanish: Comunidad Foral de Navarra), and finally the community of the Basque diaspora, mainly in the USA.

In this introductory chapter we will address the concept of nationhood, both theoretically and specifically, in its practical experience and evolution in the Basque country. We think that such a conceptual analysis will serve well as a general framework for this book. At the same time, this general framework is based on, and has been constructed in a dialogue with, the different contributions.

← 1 | 2 → Our starting point is that we are studying Basque nationhood. We refer to it as such because, despite every claim to the contrary, the Basque imagined community has had to organize itself as a sovereign cultural community, creating structures, artifacts and agreements to that end. In their everyday lives, Basque citizens have experienced and continue to experience the dynamic of advancing, and of practicing, the social reproduction of Basque identity in given spaces and contexts. This is what has permitted the reproduction of a collective Basque identity. Moreover, that practice, with its errors and opportunities, mistakes and virtues, has generated capacities for improving itself in successive phases over the course of history. Some of that practice has also been institutionalized over time, creating new hegemonic, constitutive, institutional processes.

Our topic is thus the narrative of Basque nationhood that is either hidden or has yet to be studied in sufficient depth, as a field of strategic action (Fligstein and McAdam 2010). This narrative can be captured in the space where the imagined community is practiced in daily life, where it is experienced as ‘normal’, but also succinctly identifies or defines normality, in habits, ideology and morality. It is these practices of – and in – the fields of strategic community action that a posteriori, and normally only in the long term, can be translated into concrete policies. In a certain way, these daily, typical practices show up the lines, trajectories, and possible patterns of asserting Basque nationhood, pointing from the present to the distant political horizon. We agree with Pierre Bourdieu (1977: 5) in that ‘rather, culture also provides the means through which people construct lines of action, and thus the styles or strategies of action that people deploy can be much more long running than the ends they seek to attain.’

In many cases, in lines of action towards strategic, long-term thought, those lines can be traced by the new networked civil society actors as initiatives. Like Lakoff (2004: 54), we understand a strategic initiative to be ‘a plan in which a change in one area of well-chosen questions produces automatic effects in very many areas’. Often, not even the actors and protagonists themselves have time to reflect and become conscious of these actions, given that daily life poses other more quotidian and immediate issues, rather than unhurried and deliberate thinking. As noted by Jordan Branch (2013: 13), ‘what actors consider normal or even imaginable can be restructured without their conscious recognition of the changes’.

Pedro Ibarra Güell is Professor of Political Science at the University of the Basque Country (UPV/EHU). During the transition to democracy in Spain, he worked as a labour lawyer and advocate for political prisoners. He later founded and directed Party Hartuz, a research group on participatory democracy based at the University of the Basque Country. His main areas of research are theories of collective action, political participation, social movements and nationalism. Åshild Kolås holds a PhD in Social Anthropology from the University of Oslo and works as a research professor at the Peace Research Institute Oslo (PRIO). Her core research areas are ethnicity, identity politics and peacebuilding. She has carried out long-term fieldwork in Tibetan communities in India and China and has published widely on the politics and representation of identity.