Coloring in the White Spaces

This book examines the struggle against racial and cultural inequity in educational systems, presenting the case study of a New Zealand school and its community’s determination to resist alienating environments. If we look at an untouched child’s coloring book, for instance, we think of the pages as blank. But they’re not actually blank – each page is uniformly white, with lines established to dictate where color is allowed to go. Children by this are taught about the place of color and the importance of staying within pre-determined boundaries and expectations, reinforcing a system where the white background is considered the norm. To challenge such whitestreaming, this book offers the example of a community that defied and rejected this environment in favor of a culturally-located, bilingual learning model of education based on secure cultural identity, stable positive relationships, and aroha (authentic caring and love). This journey is juxtaposed against pervasive deficit-driven, whitestream explanations of inequity and purported «achievement gaps» of indigenous Māori and Pasifika students. This story chronicles the efforts of the Kia Aroha College community on its quest to step outside education’s «White spaces» to create a new space for learning and to reclaim educational sovereignty – where individuals have the absolute right to «be Māori,» to be who they are, in school. 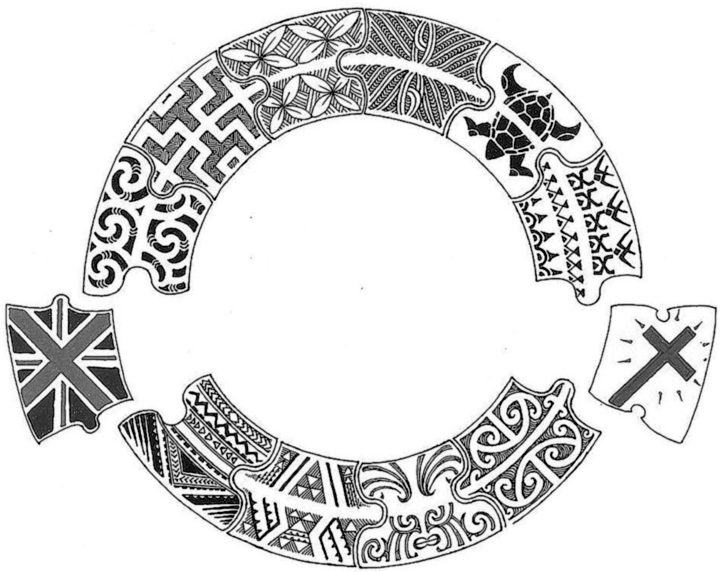 The design was initially inspired by the black and white image of a classroom scene in which the faces of two pupils were colored in brown shade. It reminds me of how over time we as tangata whenua (indigenous people) have had to fit in and conform to the structure and values of foreign interests. This design reflects the cultural diversity of the students within Kia Aroha College. I focused on artistic symbols from throughout Aotearoa (New Zealand) and the Pacific region from which many of the students descend. These symbols also refer to their proud and noble ancestors through whose authority we were successful in developing thriving and effective societies throughout these regions—until the arrogant establishment of foreign interests within these borders, which is still perpetuated today. This situation is not unique to Aotearoa.

The circle represents the importance of these pre-colonial societal structures viz.; education, language, culture, theology, and environmental resources. The break in the circle represents the disruption and the white spaces incurred, and the difficulty of re-completing the circle with pieces or structures that just don’t fit. The name, Papahueke (to be relentless or unyielding), represents our resistance. (Blaine Te Rito, 2013)

Founder and Board Chair, Roses in Concrete Community School

I first met Ann Milne in 2006 at the annual meeting of the American Educational Research Association (AERA). She had come with staff and community advisors from Kia Aroha College (then known as Te Whanau o Tupuranga) and they attended a session where I presented with some of our staff and students from East Oakland, California (USA). In our conversation after the session, it was immediately clear that we were aligned in our commitment to creating culturally and community responsive educational environments for the children in our communities. However, I had no idea the depth of the impact that Ann and her community would have on me personally and the ways I approach the work.

A little over a year later, myself and two of my closest colleagues flew to Aotearoa New Zealand and spent two weeks at Kia Aroha College. In my 24 years of teaching, no single event has had a more significant impact on ← xvii | xviii → my work in education. At the time of my first visit, I had a reputation as a highly skilled classroom teacher and researcher whose work focused heavily on culturally and community responsive curriculum and pedagogy. As part of this work, I had studied the work of incredible teachers and programs across the United States. But, I had never seen a school that was delivering on cultural and community responsivity in the ways that I witnessed at Kia Aroha College. What I saw during my time there convinced me that something fundamentally different was possible in my own community. Since then, I have visited Ann’s school every other year, and Ann and her team have visited our school in East Oakland on the alternate years.

Eight years after my first visit to Kia Aroha College, we opened the Roses in Concrete Community School (RiC). We modeled the school cultural practices at RiC, in large part, after those that I experienced at Kia Aroha College. Although our school functions as a lab school and has influenced school planning and practices all over the United States, we have named only one school as an official partner school—Kia Aroha College. We describe this relationship as “ukukura”, a Māori word created by Māori language keepers to describe two community schools in solidarity with one another in the struggle for educational autonomy. Our community is very cautious about partnerships, particularly around the education of our most vulnerable children. We do not enter lightly into the decision to publicly name Kia Aroha College as our ukukura. From our cultural frame of reference, this public acknowledgement of our partnership is the highest form of respect for another set of educators.

When I recommend readings for educators that are thinking about how to develop school cultures that are community and culturally responsive, this is the first book I will tell them to read. While I certainly have not been to every school in the United States, I can say that none of the schools I have visited (and that’s quite a few) have accomplished what Ann Milne and the staff at Kia Aroha College have achieved. This book provides profound critiques of existing colonial models of education and viable alternatives that value the language and culture of those young people and families that have largely been demonized and pathologized in “white”stream models of schooling. It does not need to be this way. If we are ever to achieve the levels of cultural pluralism necessary to achieve pluralistic, multi-racial democracies we must reconsider the ways in which we school our children. For my money, this book is the primer for schools and systems of education in post-genocidal colonial societies like the United States and New Zealand ← xviii | xix → to finally come to grips with the harm it has been doing to children from outside the dominant culture. Nothing is more important in this next generation than a fundamental rethink about how we educate our children, and no book that I have seen should be more influential than this one in those efforts.

My grateful acknowledgement to the Board of Trustees of Kia Aroha College for your permission to write this story and for your trust that I would tell it with the deepest respect for our collective journey.

This book would not have been possible without the support of the staff, and Boards of Trustees of the three schools involved in this journey; Clover Park Middle School and Te Whānau o Tupuranga, which merged to become Kia Aroha College in 2011. This story belongs to you and the whānau (families) and community, whose courage over nearly three decades inspired, and continues to drive, the dream that it is possible to make education fit our children, in spite of the opposition we faced at every step. That experience taught me about respect, integrity, responsibility, reciprocity, truth, and real accountability to our future generations.

The story also belongs to the students, past, present, and future, of these three schools, who inspired me every day to be a better learner, a better teacher, a better school leader, a better researcher, and a better advocate against the injustice and inequity that education has delivered for Māori and Pasifika learners. You show us the meaning of critical hope and a strong secure identity as Māori, Samoan, Tongan, Cook Islands Māori—as who you are. That powerful understanding will change our educational landscape for the better, ← xxi | xxii → so that education has to work much harder for you than it has done in the past. Thank you for keeping me focused on what really matters.

To my family who have all shared so closely, both personally and professionally, in this journey, there are not enough words to say thank you. My grandchildren and great-grandchildren are the epitome of the dream to reclaim educational sovereignty for our children, and I celebrate the strength of your Māori language and identity. My children and grandchildren are woven into the fabric of all three schools where they have been students, teachers, and staff members themselves. That’s what whānau is about.

Ann Milne received her PhD from the University of Waikato, New Zealand. She has led the Kia Aroha College community’s 28-year journey to resist and reject alienating school environments through culturally responsive and critical social justice pedagogies. In 2015 she was the recipient of the New Zealand Principals’ Federation’s prestigious Service with Distinction Award; she has also received several national research awards and scholarships.