Essays and Studies in Middle English

This volume is a selection of papers presented at the 9th International Conference on Middle English held at Wyższa Szkoła Filologiczna (Philological School of Higher Education) in Wrocław, Poland, from April 30 to May 3, 2015. The contributors cover a wide range of topics in the area of language and literature. The linguistic papers constitute the majority of contributions and focus on problems from phonology to grammar, semantics and pragmatics. The literary contributions discuss various aspects of Middle English texts.

The present volume contains selected papers from the 9th International Conference on Middle English held at Wyższa Szkoła Filologiczna (Philological School of Higher Education) in Wrocław, Poland from April 30 to May 3, 2015.

Sixty scholars from sixteen countries participated in the conference, i.e., from Austria, Belgium, Finland, France, Germany, Italy, Japan, Norway, Russia, South Africa, Spain, Switzerland, Ukraine, United Kingdom, USA, and Poland. Forty one papers were presented and fifteen have been selected for publication in the volume. One paper, by Professor J. Wełna was not presented at the conference but has been included here. The author could not attend the conference.

The papers cover a wide spectrum of issues both in the area of language and literature. The linguistic papers constitute the majority of contributions as in earlier conferences. They cover a wide area of problems from phonology to grammar, semantics and pragmatics. Two literary papers discuss various aspects of Middle English texts and one is devoted to an early Modern English author.

It is our pleasure and duty to express our gratitude and acknowledge the efficiency and dedication of our colleagues from Wyższa Szkoła Filologiczna of Wrocław who have helped to solve administrative problems contributing to the success of the conference, in particular Ms. Anna Zasłona.

Finally, we would like to express our gratitude to the Rector of the Philological School of Higher Education Professor Norbert Morciniec for offering the venue and to the Chancellor of the School, Mr. Ryszard Opala for his generous financial and other support.

The typology of medieval recipes – culinary vs. medical1

Abstract: The aim of the present paper is to compare the earliest culinary recipes, coming from the 14th and 15th centuries with medical recipes from the same period. The study will concentrate on the structure of the analysed texts. Special attention will be paid to the similarities and differences within the particular components as found in the two types of recipes. The corpus for the present study consists of a similar number of culinary and medical recipes from the Middle English period.

Middle English recipes have already received attention of many scholars.2 Their studies have shown that recipes, whether medical, culinary or alchemical, “are a well-defined procedural genre with a clear writing purpose” (Taavitsainen 2001a: 86). They are usually divided into a number of elements (see section 3 of this paper) and their main function is to give instructions on how to prepare various products, e.g.: medicaments, dishes or alchemical potions (cf. Taavitsainen 2001a, Quintana-Toledo 2009, Grund 2003).3

Recipes as a text type are usually examined according to their linguistic features4. The typical recipe features include “a set form of a title, imperative forms ← 11 | 12 → of verbs, short paratactical sentences following temporal sequence of instructions to be carried out, object deletion, measurement specifications, and formulaic endings” (Taavitsainen 2001b: 142). Görlach (2004: 124) adds the following features: “full sentences or telegram style”, “use of possessive pronouns with ingredients and implements”, “complexity of sentences”, and “marked use of loanwords and of genteel diction”.

The present paper concentrates on the structure of the recipes written in the 14th and 15th centuries. Two types of recipes will be compared: medical and culinary.

The corpus used for the present study consists of two parts: the culinary and the medical. The former consists of recipes found in various culinary collections from the 14th and 15th centuries.

The medical database consists of recipes found in the Remedies and materia medica and the Appendix (First Corpus Compendium and Second Corpus Compendium) sections of the Middle English Medical Texts (MEMT). These collections represent the earliest phase of vernacular medicine and are often regarded as those representing a less learned tradition of writing. They consist mostly of remedies, i.e. books for consultation (Taavitsainen 2001a), in which recipes are given in a sequence. Due to the fact that the culinary recipes are non-learned texts, we have decided to exclude from the present study recipes found in the writings representing academic tradition (surgical texts and specialised treatises).

We have managed to collect a fairly proportional number of recipes. Altogether 1,379 culinary and 1,487 medical recipes. Table 1 shows the exact number of recipes analysed, as well as the total length of the corpus. ← 12 | 13 →

Table 1: The size of the corpus [CR = culinary recipe; MR = medical recipe; nr of words based on the automatic count in .docx files]

3. The structure of the medieval recipe

The studies on Middle English recipes, even though they differ in terms of the terminology used, illustrate that recipe texts are characterised by a fairly regular structure and can be divided into smaller parts, see Table 2 below.

Table 2: The structure of a recipe5 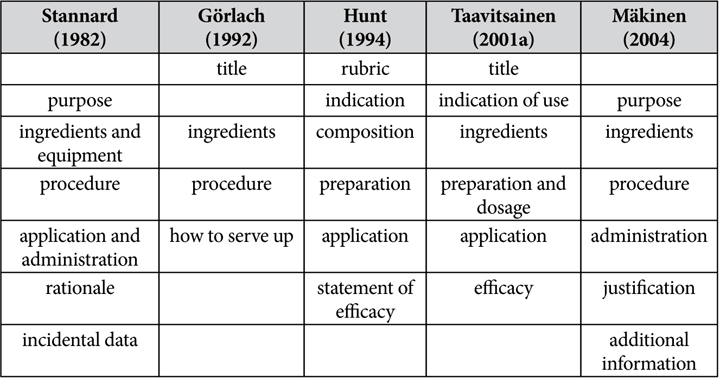 Due to the great variety of terminology used in the available studies, in the present paper the following division will be applied: heading, which consists of the title and/or statement of purpose; procedure, which can be divided into the list of ingredients and/or the preparation; application (which in case of the culinary material refers to the ‘how to serve up’ component, as Görlach (1992) calls it); and additional comments. Of these elements, according to Stannard ← 13 | 14 → (1982, after Carroll 2004: 179), only the procedure was obligatory. On the other hand, Alonso Almeida (2013) states that it is the ingredients which cannot be omitted.6

The analysis reveals that headings were a common element of recipes (in the medical corpus we have found 83% and in the culinary database 99% of recipes which started with a heading; see Figure 1). In medical works, the lack of a heading, at the beginning of a recipe, does not necessarily imply that some recipes were inserted in a given collection randomly, without any reference to a specific ailment to be cured. On the contrary, these pieces of texts are usually listed as additional possible preparations to the problem described by the heading, cf. examples under (1):

Figure 1: The number of headings in the analysed medical and culinary texts

In many cases (29% of all medical headings, see also Figure 3), recipes are indicated by a heading expressed by such forms as: For the same, Another, Item7, ← 14 | 15 → which were probably incorporated to avoid repetitions, see (2). Such cases have been found also in the culinary material, although they are much less frequent (only 1.5% of cases), see examples under (3). The recipes which instead of their own title refer to the previous dish are often shorter than the previous recipe, and present an alternative to one of the steps in the preparation of a particular dish (3a). Sometimes, even though the heading does not contain the title, the author indicates the major ingredient of the dish, as in Anoþour mete þat hatte amydon; Anoþur mete þat hatte fresse; Anoþur mete þat hatte couwe de rouncin.

(b) Gurnard rosted or boyled / Take a Gurnard, and drawe him in þe bely and saue the powche with-yn hole; and make sauce of water and salt; And whan hit bigynneth to boile, skeme it clene, and cast the Gurnard thereto, And seth him; and sauce / to him is sauce of ginger, or vergyussauce, and serue him colde.

Anoþer / Take a gurnard rawe, and slytte him endelonge the bak, þorgh þe hede and tayle, and splatte him, and kepe the lyuer; And take þe rawe lyuer, and brede, and fissh broth, Wyne, and vinegre, And drawe hem thorgh a streynour, and lete boyle; and þen cast there-to pouder ginger, saffron, and salt. And þen roste the gurnard, and splatte him on a gredire, and ley hym in a dissh. And þen cast þe sauce on hym in þe dissh, and serue him forthe hote.

The headings in the medical corpus are typical of remedy books, in which recipes (as stated earlier) are usually given in a sequence, which enables one to easily find cures for various ailments. In the more learned writings (surgical books or specialised texts) recipes are part of large treatises and often lack headings. One way to discern them in the context is to look for such words or phrases as, Recipe…, Take…., Another for the same… (cf. Taavitsainen 2001a: 95–96). Sometimes, within the text, the author only mentions the name of a medicinal specific and describes the way of application. In other cases, the author informs the reader that more detailed information on preparation and application is to be found in a separate section or chapter, often referred to as þe antidotarie, see (4).

These sections, i.e. antidotaria8, are often preceded by some introductory remarks and followed by the recipes listed in a sequence and marked by a heading.

The main aim of the heading is either to give the name of the medicament or dish to be prepared (examples (5)–(6)), or to state the purpose of preparing a particular medicament or dish, for instance to specify the ailment for which a given recipe is written or the occasion for which a particular dish is appropriate (examples (7)–(8)). In fact, some of the recipes, which begin with the statement of purpose, include the name of the medicament/dish within the statement (medical: To make vnguentum viridum, For to make pelotus of antioche; culinary: To maken a mete þat is icleped halekaye).

(7) For harness of þe splene,
For to delyuer wynde and for þe colyk,
For streytnesse off þe brest

The frequency of occurrence of the particular heading components (the title, the statement of purpose or both) in the analysed recipes is shown in Figure 2.

Figure 2: The frequency of occurrence of the particular heading components

Of the three elements (title, statement of purpose and both), the statement of purpose is the prevailing pattern in the analysed medical material. Its high frequency in the medical recipes might be accounted for by the fact that the main role of the recipes found in remedy books was to serve as a quick reference for both specialist or lay readers. Therefore, compiler(s) of such texts might have focused on the medical problem rather than the name of a pharmaceutical (expressed by a title). For instance, the term alcalcolon ‘a compound medicine against tertian fever’ might have been meaningless for an unexperienced reader. Hence, starting a recipe with such statements as: For/Against tertian fever or Medicine against fever, seemed a better solution. This assumption is partly supported by examples, such as (9), where both elements (title and statement of purpose) are present. In such cases, the title, which is the name of a medicament, is often explained (cf. unguentum rubeum - a rede ointment). This information is supplemented by a fragment clarifying which ailments could be healed with the use of a given medicament.

Jacek Fisiak is a retired professor of linguistics. He has published widely in the area of English linguistics including the history of English, Old and Middle English and historical dialectology on both sides of the Atlantic. Magdalena Bator studied at Adam Mickiewicz University in Poznan (Poland). Currently she works as a professor of linguistics at the School of English at the University of Social Sciences in Warsaw (Poland). Her research interests focus on various aspects of historical linguistics. Marta Sylwanowicz received her Ph.D. from the University of Warsaw, Poland in 2004. Her research interests include historical linguistics, language contact and the evolution of scientific writing. In her studies, she focuses on English medical terminology of the medieval and early modern period.