Journeys in the Sun: Travel Literature and Desire in the Balearic Islands (1903–1939)

The Mediterranean and the Balearic Islands have always enticed the minds of British travellers. In the first years of the twentieth century, the tourist industry made the islands accessible for a wide number of visitors, who depicted them in pictures and words. In the following decades, however, the image of the islands shifted and developed considerably from a quiet and pastoral winter resort to a popular destination for pleasure-seeking tourists and "sea ‘n’ sun" tourism. Taking these last representations as a starting point, this book travels back in time to explain how, by whom and why these images were created/shifted/developed to articulate the ultimate place of leisure and pleasure signified in today’s Majorca and Ibiza. The depiction and the evolution of topics such as ‘travel’, ‘tourism’, ‘authenticity’, ‘landscape’, ‘South’, ‘North’, ‘margin’, ‘centre’, ‘exoticism’, ‘people’, ‘costumes’ and ‘customs’ are examined in order to establish their contribution to the formulation of the ‘Balearic paradise’ in the first third of the twentieth century. This book will help the reader to understand the imagery associated with the islands today.

Nowadays, the Balearic Islands represent an important reference in the imagination of leisure and tourism in contemporary Europe. Critics have established the first years of the twentieth century as the beginning of the tourist industry on the islands with the opening of the first hotel (1903), the foundation of the first local institution for the promotion of tourism, Fomento de Turismo or Tourism Board (1905), the first guided tour to the Balearic Islands by Thomas Cook (1903), and the publication of Amengual’s La industria de los forasteros (1903) which showed interest in promoting the islands as a tourist resort. Since then, the image of the Balearic Islands1 has shifted, and they have developed from being a quiet and pastoral winter resort to become a popular destination for pleasure-seeking tourists and “sea ’n’ sun seaside tourism” (Simonis 2005: 615). By comparing the postcards presented below (figs. 1 and 3 dating from the early years of the twentieth century; figs. 2 and 4 representing its last decades) one understands that the shift in the representation of the islands is significant. ← 11 | 12 → 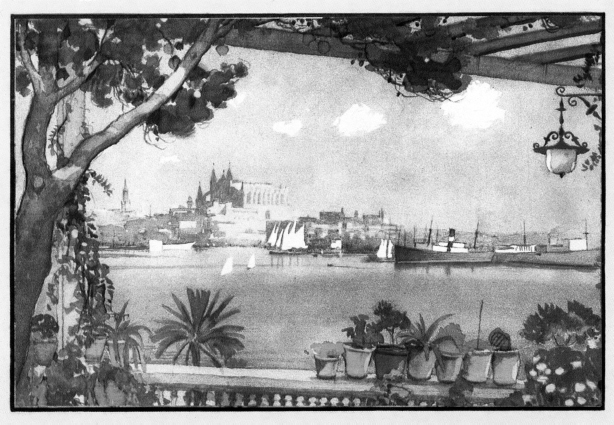 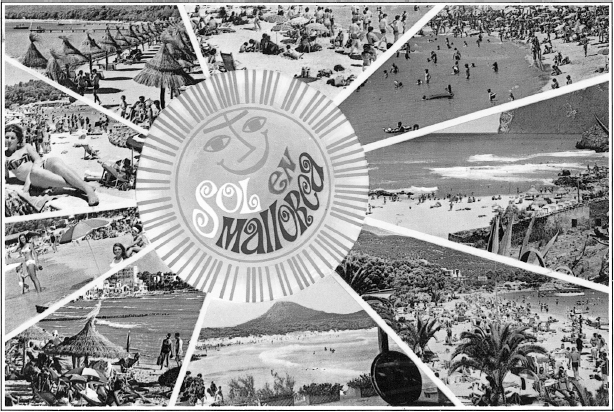 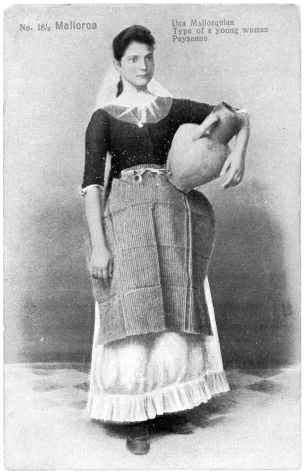 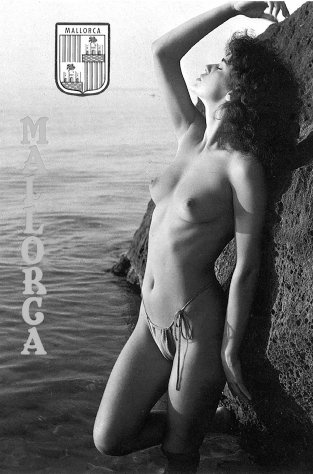 Similarly, the following passages from two travel guides show that, indeed, the travel scenarios encountered by travellers to the Balearics differ according to the period. On the one hand, the travel guide Baedeker’s Spain and Portugal shows that in 1913,

[t]he Balearic Islands are becoming more and more popular as a quiet resort in winter and spring on account of their mild and equable climate, their moderate rainfall, their attractive scenery, their comfortable accommodation, and their good order and administration […]. (Baedeker 1913: 271-272)

On the other hand, the twenty-first century visitor reads in the Lonely Planet travel guide that: ← 13 | 14 →

[e]ach year a massive multinational force invades the islands in search of a piece of this multifaceted paradise. The total population of the isles does not amount to a million, but many times that number are involved in a round-the-clock airlift and disembarkation of sun-and-fun-seeking from Easter to October. (Simonis 2005: 615)

It is clear that, despite the presentation of the islands as resorts in both cases, not only the intentions of the travellers but the image of the place and its uses have changed.

It is necessary to ask where and when the shift from a quiet and bucolic place to a loud and fun-seeking scene originates, at least in the British contemporary imaginary. Do all the islands of the Balearic archipelago follow the same representational pattern? How do they develop? Are these images a conscious self-creation of the islanders or have they been proposed (or imposed) by foreign visitors? When does the shift happen and what sustains it? Does the quiet and idyllic scenario prevail parallel to the boisterous one? Does it disappear? Does it evolve? Surprisingly, there is little research available concerning these questions. Journeys in the Sun will address this gap by analysing a number of book-length accounts of travel to the Balearic Islands in order to understand the discourses that generate and sustain such images.

This project is a comparative literary and cultural study of the textual and visual images of the Balearic Islands conceived by British travellers from 1903 to 1939, the golden era of travel writing according to critics such as Paul Fussell. The depictions and the evolution of topics like travel, tourism, authenticity, landscape, South, North, margin, centre, locality, people, costumes, and customs are scrutinized in order to establish the role of such representations in the formation of a Balearic identity in the eyes of British travellers. By no means do I intend to state that solely these travel books created the contemporary image of the Balearics. I do suggest, however, that these accounts mirror a general sense of imagining the islands and a particular way of portraying what others had established as ‘true Balearic’ images. ← 14 | 15 → Therefore, in the analysis of hetero-images (images of the Other) this study also tries to unmask the self-image, the identity of the culture that observes, understanding their wishes, projections and anxieties as an essential generator of their travel discourse.

If postcards have been the conventional (and, arguably, the most stereotypical) way of materializing a trip, a hundred years ago the travel book represented the materialization onto paper and the testimony of the travel journey (Sharp 2009: 39). This book considers the textual and visual images found in travel accounts on the Balearics in the first third of the twentieth century to be significant productive identity tools. As stated above, the Balearic Islands have enjoyed (or suffered) the logo of “paradise of sea, sand, sun and sex” during the last five decades (Mulvey 1996: 109). Taking these modern representations as a starting point, I travel back in time to the origins of tourism in the Balearics to analyse how, why and by whom these proto-images were created and how some have developed into today’s fixed stereotypes.

Why is this study necessary? The modern image of the Balearics and of some areas in the Mediterranean as ‘leisure and pleasure spaces’ has homogenized the region. Nowadays it is known in tourist brochure literature as the ‘Medland’, a space for the ‘all-inclusive’ consumerist vacation. However, the recent tendency to present the Balearics as a new space (environmentally sustainable, natural, non-seasonal, polyvalent and sophisticated)2 leads cultural or economic analysts such as Aguiló, Alegre and Sard (2005) to examine the long established touristic images of the Balearics in order to re-interpret them and propose new ones. This book explains the discursive elements that have sustained the Balearics—long defined under the label of the ← 15 | 16 → ‘Sunny South’—as a consistent and continuous textual (re)creation of a place of leisure and pleasure. The results of this research are relevant for the academic fields of travel literature analysis, history of tourism, cultural history, comparative studies, sociology, cultural anthropology, and, more broadly, for the history of ideas.

Journeys in the Sun concentrates on a very particular period—the first four decades of the twentieth century—for specific reasons. In 1903, the first hotel of the islands, the Grand Hotel, was inaugurated. Many critics and travel guides see this fact as the foundational event in the history of tourism in the region (Cirer 2006: 16; Escalas 1933: 21). Although many travellers had already visited the Balearics in the nineteenth century,3 it is important to consider this date since it is from then on that the islands entered a wider international tourist market (Caro 2002). Significant technological and sociological changes in the islands ran parallel to the development of tourism. The outbreak of the First World War in 1914 not only meant an interruption in travel to the Balearics but also a change of attitudes and sensibilities for future travellers. This book evaluates the extent to which the new stance affected the image of the Balearics. Once the First World War finished in 1918, a new generation of travellers journeyed in large numbers to the Mediterranean islands looking for sensations and landscapes of which they had been deprived during the war. The 1920s and 1930s saw the establishment of the tourist industry on the islands, consolidating itineraries and leisure activities as part of the normal routines of the place. I compare the accounts of travellers to the Balearics before and after the Great War to show similarities and differences between them. The Spanish Civil War devastated Spain from 1936 to 1939 and ended travel activity on the islands for more than twenty years. It is here that this study concludes. Therefore, the period studied coincides with the founding decades of tourism on the islands. ← 16 | 17 →

This book concentrates on a set of seven travellers and their accounts. Although a significant number of travellers visited the Balearics in the first forty years of the twentieth century, only seven book-length accounts of British travellers were published within this period. These travellers had in common their journey to the Balearic Islands (some only to one of the islands) and the fact that they returned to their country of origin (England or Scotland in the case of Boyd) to publish the account of their experience in the form of a travel memoir. These travelogues, published within thirty-two years, provide the corpus for this book. The first three travel books were published before the First World War: Margaret D’Este’s With a Camera in Majorca (1907), Mary Stuart Boyd’s The Fortunate Isles (1911) and John Ernest Crawford Flitch’s Mediterranean Moods (1911). The following four were published in the period between the World Wars. These are Douglas Goldring’s Gone Abroad (1925), Ada May Harrison’s A Majorca Holiday (1927), Gordon West’s Jogging Round Majorca (1929), and Francis Caron’s Majorca: The Diary of a Painter (1939). One of the aims of this book is to show the relevance of these texts, if not as canonical travel literature, at least as sustainers and recreators of identity discourses that are still valid today, a hundred years later.

Eduard Moyà is Lecturer in English at the University of the Balearic Islands (UIB) and member of the UIB research group RELATMIT. His PhD thesis, Balearic Visions (2012), was conferred the Dean’s Award for Research Higher Excellence Degree at the Graduate School of The University of Queensland (Australia). He has co-edited the book Le voyage dans tous ses états (2016) and collaborated in the dictionary of literary visitors on the Balearics, Entre la calma y la inspiración (2016).