The 'Stolpersteine' and the Commemoration of Life, Death and Government

Since the beginning of the 1990s, the German artist Gunter Demnig has been installing his Stolpersteine [Stumbling Stones] all over Europe – including Russia – to commemorate the victims of National Socialism. Today, the Stolpersteine constitute the world’s second largest Holocaust monument. In this book the author addresses some of the most crucial issues raised by these memorial stones.
Taking as his point of departure the philosophy of Giorgio Agamben, Michel Foucault and Martin Heidegger, the author discusses the juridico-political structure of the Third Reich in which the victims lived and perished and identifies a new paradigm for the commemoration of Third Reich victims. The subject of commemoration is in fact not the dignified subject of law, but the naked life of the Muselmann: he who can neither live nor die. This book analyses the challenge of the problem of history that the Stolpersteine testify to, and it discusses whether a unique monument such as the Stolpersteine can somehow restore what was once taken from the victims.

I submitted a preliminary version of this book for the requirements of the PhD degree at the University of Copenhagen, Denmark, September 2014.

An article discussing the overall issues of the present book was published as: Östman, L. (2015). ‘The ‘Stolpersteine’ between Commemoration and Biopolitics’. In M. Lytje, T. K. Nielsen, M. O. Jørgensen (eds), Challenging Ideas: Theory and Empirical Research in the Social Sciences and Humanities, pp. 43–65. Newcastle upon Tyne: Cambridge Scholars Publishing.

Some of the analyses in Chapter 2 were published as: Östman, L. (2013). ‘Philosophical Archaeology as Method in the Humanities. A Comment on Cultural Memory and the Problem of History’, Danish Yearbook of Philosophy, no. 46 (2011), pp. 81–103. Copenhagen: Museum Tusculanums Forlag.

Some sections from Chapter 6 are also being published as: Östman, L. (2017). ‘Stolpersteine in Light of Roman Archaic Religion’. In L. B. Christensen, J. T. Jensen (eds), Religion and Material Culture: Defining Religion, Religious Elements and Cultural Memory on the Basis of Objects, Architecture and Space. Proceedings of an International Conference held at the Centre for Bible and Cultural Memory (BiCuM), University of Copenhagen and the National Museum of Denmark, Research & Exhibition, Danish Prehistory, Copenhagen, May 6–8, 2011, pp. 341–61. Antiquité et sciences humaines, III. Turnhout: Brepols Publishers.

My sincere thanks to all the publishers who allowed me to reproduce this material.

Every effort has been made to trace copyright holders and to obtain their permission for the use of copyright material. The author apologizes for any errors or omissions in the above list and would be grateful for notification of any corrections that should be incorporated in future reprints or editions of this book. ← xi | xii →

This book would not have been possible without the kind help and support from dear friends: Dr Gert Sørensen, Professor Jesper Høgenhaven, Professor Rüdiger Schmitt. I also wish to thank my editor at Peter Lang, Dr Laurel Plapp, for her continuous encouragement.

Apart from the Roman Empire, there is perhaps no single regime that has received as much attention as the Third Reich. Even today, it appears to be true that the former is ‘a revolution that will ever be remembered, and is still felt by the nations of the earth’, as Edward Gibbon writes in his grand œuvre The Decline and Fall of the Roman Empire from 1776 (vol. I: 31). As for the latter, this was the first form of government to have placed the extermination of millions of civilians at the core of its politics, constituting ‘an administrative process carried out by bureaucrats in a network of offices spanning a continent’, as Raul Hilberg wrote in the preface of his classic work from 1985 (1996: vol. 1, ix).

New research concerning the historical circumstances of the Third Reich keeps appearing: new archaeological findings, yet another mass grave, another document confirming the deportation of yet another group of citizens and so on, may shed new light on a particular region, on its citizens, its culture and also on how, why and when this region fell into the hands of the Third Reich – even why some welcomed it. Perhaps further historical investigation may also show that a particularly Western European focus has resulted in the neglect of the Eastern European dimension of the Third Reich’s politics, as Timothy Snyder (2010) has underlined, for instance. Despite different scholarly interests, new historical details about the victims seldom change the overall picture. Already Hilberg’s book specifies who the victims were and where they were living when their lives were brutally taken from them (1985: vol. 3, 1212).

The general picture, thus, has remained the same for decades. In any case, as the historian Eric Hobsbawm rhetorically asks in his The Age of Extremes: ‘What does statistical exactitude mean, where the orders of magnitude are so astronomic? Would the horror of the holocaust be any less if historians concluded that it exterminated not six millions […] but ← 1 | 2 → five or even four?’ (1995: 43). Although it is certainly an impressive work, the first published volume of the multivolume Encyclopedia of Camps and Ghettos 1933–1945 is unlikely to change the general picture of the Third Reich but, rather, strongly to reinforce it. Rather than produce new historical knowledge, what is important in research such as Snyder’s and in reflections such as Hobsbawm’s is that they change and challenge our existing knowledge and discuss the facts at hand. This is necessary, Snyder writes at the end of an article, because ‘memory has made some odd departures from history, at a time when history is needed more than ever’ (2009: 8).

In many ways, which will become clear over the pages to come, Snyder’s statement structures the core of the present book’s intention. If the historical examination of the Third Reich’s exterminations can be safely declared as completed, further work could, for example, continue to focus on how these are commemorated and to investigate the relation between history and memory, in performing something like a philosophical archaeology of this relation and, perhaps, conflict. Such an archaeology would then invite the question of contemporaneity, by asking how the present relates to the past and in what the nature of memory’s departure from history consists.

An extraordinary example of such historical commemoration is found in the Stolpersteine [Stumbling Stones]. Since the beginning of the 1990s, throughout the European continent and even beyond, the German artist Gunter Demnig has continued to install one small Stolperstein (96 × 96 × 100 mm), similar to a cobblestone, for each of the victims of the Third Reich, whether from Germany or elsewhere. Most often by installing the Stolperstein in front of the individual victim’s last self-chosen Wohnort [place of residence] – although sometimes the victim’s workplace is chosen as a location, instead – this act constitutes itself as an ongoing project of commemoration. As at November 2015, as the homepage of <http://www.stolpersteine.eu> advises, 55,000 Stolpersteine have been installed. Setting aside the Berlin Denkmal für die ermordeten Juden Europas [Memorial to the Murdered Jews of Europe (see Figure 1)], the Stolpersteine collectively constitute the world’s largest monument for victims of the Third Reich. ← 2 | 3 → 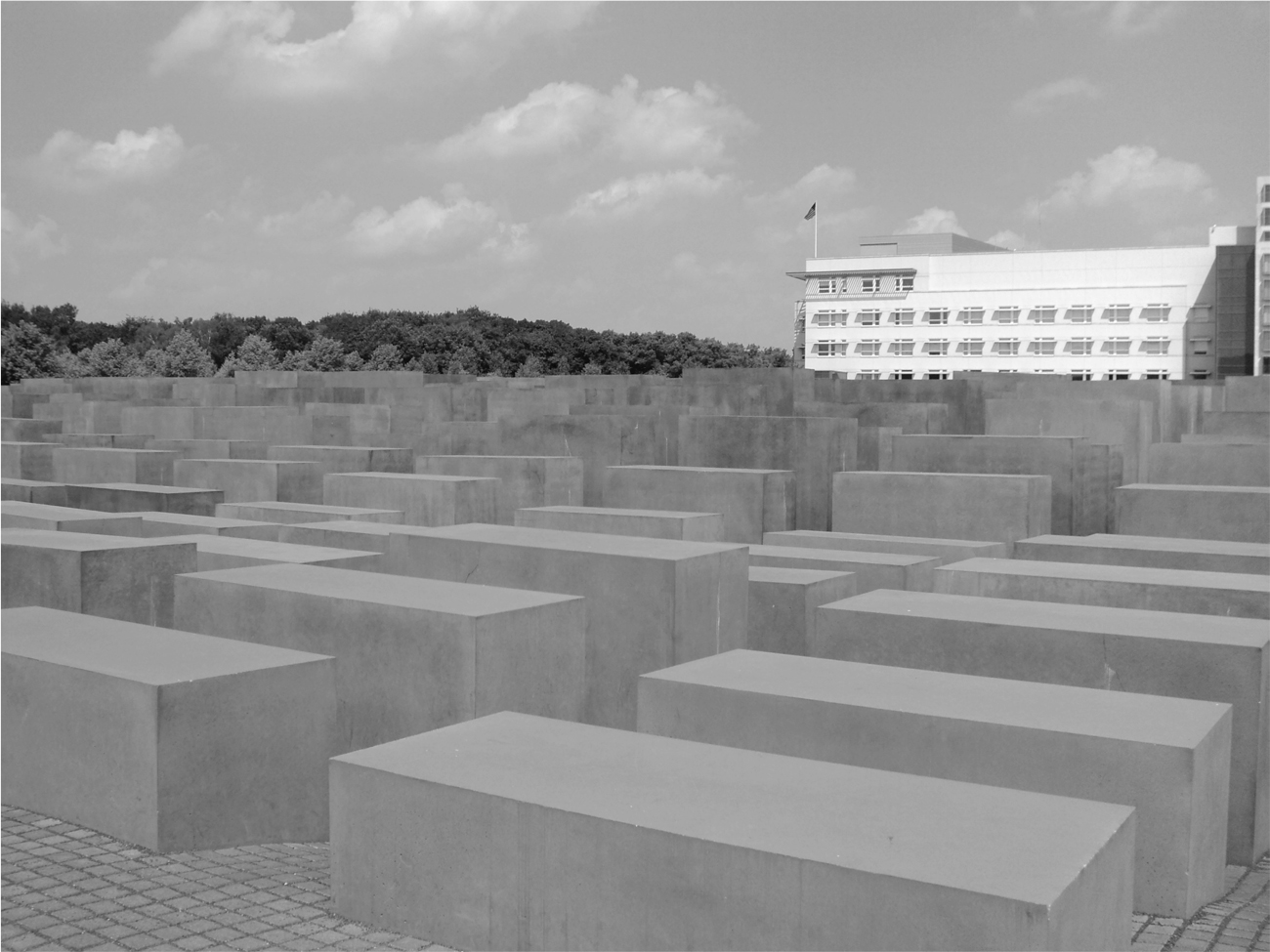 It is certainly commendable that a monument should aim at individualizing the victims, to mark the lives they once lived in the city or in the countryside. Victimhood, as defined by the Stolpersteine, is all-inclusive: the stones do not distinguish between, nor do they specify, Jews, homosexuals, communists, Sinti and Roma or any other group. Rather, they follow the principle of ‘one human being – one stone – one fate’ (Demnig 2015: 3).1 Instead of any religious, political, or sexual identification, what unites the victims is their humanity. Perhaps the greatest human catastrophe suddenly appears at our feet. The victims were just like you and me. They lived here; they walked here where today you and I live and walk. The ‘Stolpersteine-landscape’ marks a cartography of past life in the midst of present life. ← 3 | 4 →

Nonetheless, when it comes to this kind of commemoration, a difficult question presents itself, which of course applies not only to the Stolpersteine but for commemoration in general: namely, how is it possible to commemorate the annihilation of a human being who was subjected to something far worse than murder? Can annihilation still be captured in legal or ethical terms, or is the reality of the exterminations beyond such conceptualizations? The commemorative task is how the condition of extreme inhumanity can be remembered while still respecting the humanity of the victims. The risk could be that if the victim’s humanity is commemorated, the fact of his or her annihilation will be forgotten. And if the fact of the victim’s annihilation is forgotten, the importance and, indeed, ethical obligation to commemorate the victim’s humanity cannot be fulfilled – at least, not if one believes that commemoration of the victims of the Third Reich must stand upon the soil of history.

Lars Östman holds a PhD in Transnational Studies and Migration from the University of Copenhagen. His work is on the relation between history and memory in light of philosophy; he has primarily published on political philosophy and has translated Agamben into Danish.