A Guide to Understanding Journalism

In an age when young people may confuse online chatter with legitimate news, Navigating the News is the first textbook designed to show students how to recognize credible reporting and how real journalists perform their jobs.
The book begins with the basics of how to critically assess news stories, then covers what to look for in everything from community news and crime reporting to business, political and investigative coverage. More than 50 professional journalists share insights on how they gather, edit and report news, and discuss what critical audiences should expect from their news coverage.
Students learn how to analyze complex topics including science, environmental and education news, and a series of chapters covers how to approach news from different parts of the world.
Navigating the News is aimed at general audiences, not just journalism or communication majors. Given the importance and timeliness of the subject, this book could easily be the core text for general education classes on news and media literacy. The trend toward teaching young people how to understand and assess news is gaining momentum at universities everywhere.
The book is written in a clear, straightforward style to engage students who may be getting their first taste of adult issues and concerns. Even students who have avoided "serious" news growing up will gain tools for understanding, assessing and processing coverage of complex stories.
The mission of this text is simple: If students don’t recognize what real news is, Navigating the News is going to teach them.

Figure 2.1: View of the BBC newsroom in the Broadcasting House, London.

Figure 3.1: Reporters and camera personnel from KVUE-TV in Austin, Texas recording an interview.

Figure 4.1: Officers with the Los Angeles Police Department establish position outside of a crime scene.

Figure 7.1: U.S. President Barack Obama and King Abdullah II of Jordan make statements to the press before meeting in the Oval Office.

First and foremost, thanks to my co-authors for their contributions to this project. While some are faculty colleagues at San Jose State University and/or longtime academic associates, some had never met me before agreeing to write chapters for this book. I applaud their efforts in stepping up to write about their assorted areas of specialty or interest. In particular, I’d like to thank Michael Longinow, Frank Russell and Nisha Garud Patkar for connecting me with outstanding fellow journalists and academics to strengthen the project.

I’d also like to salute the numerous journalists who agreed to be interviewed for the book by myself and my co-authors, and who stuck with the project in spite of some last-minute hassles. Given the political climate at the time interviews were being conducted, it was extremely difficult to get many journalists to talk. Some agreed to be interviewed but were then forbidden to do so by their employers’ legal teams. This made those who stuck with the project especially appreciated. Their shared insight, knowledge and wisdom give this book much of its authority.

Additionally, I’d like to thank Raechel Price for her indispensable contributions in getting this book from the interview stage to the finished product. Her help in transcribing interviews, analyzing chapters and helping to edit material was instrumental in getting the book to completion, and her intelligence and experience as a journalist provided a much-needed independent point of view.

I should apologize to the staff of the Spartan Daily for my somewhat divided attention as their faculty advisor over a couple of semesters while putting in so ←xiii | xiv→many hours on this book. In particular, huge thanks to Mike Corpos, the Daily production chief and my trusted colleague, for picking up the slack and keeping everything running as smoothly could possibly be expected of a student news organization.

Finally, thanks to my fellow faculty members in the School of Journalism and Mass Communications at San Jose State University. In particular, I’d like to thank School Director Phylis West-Johnson for her support and encouragement, and assistance in getting me approved for a sabbatical to work on this project. Her wisdom and good nature (and amateur psychiatric help) were and are greatly appreciated. Thanks to everyone else for tolerating me throughout the process.

What Is News in the Digital Age? 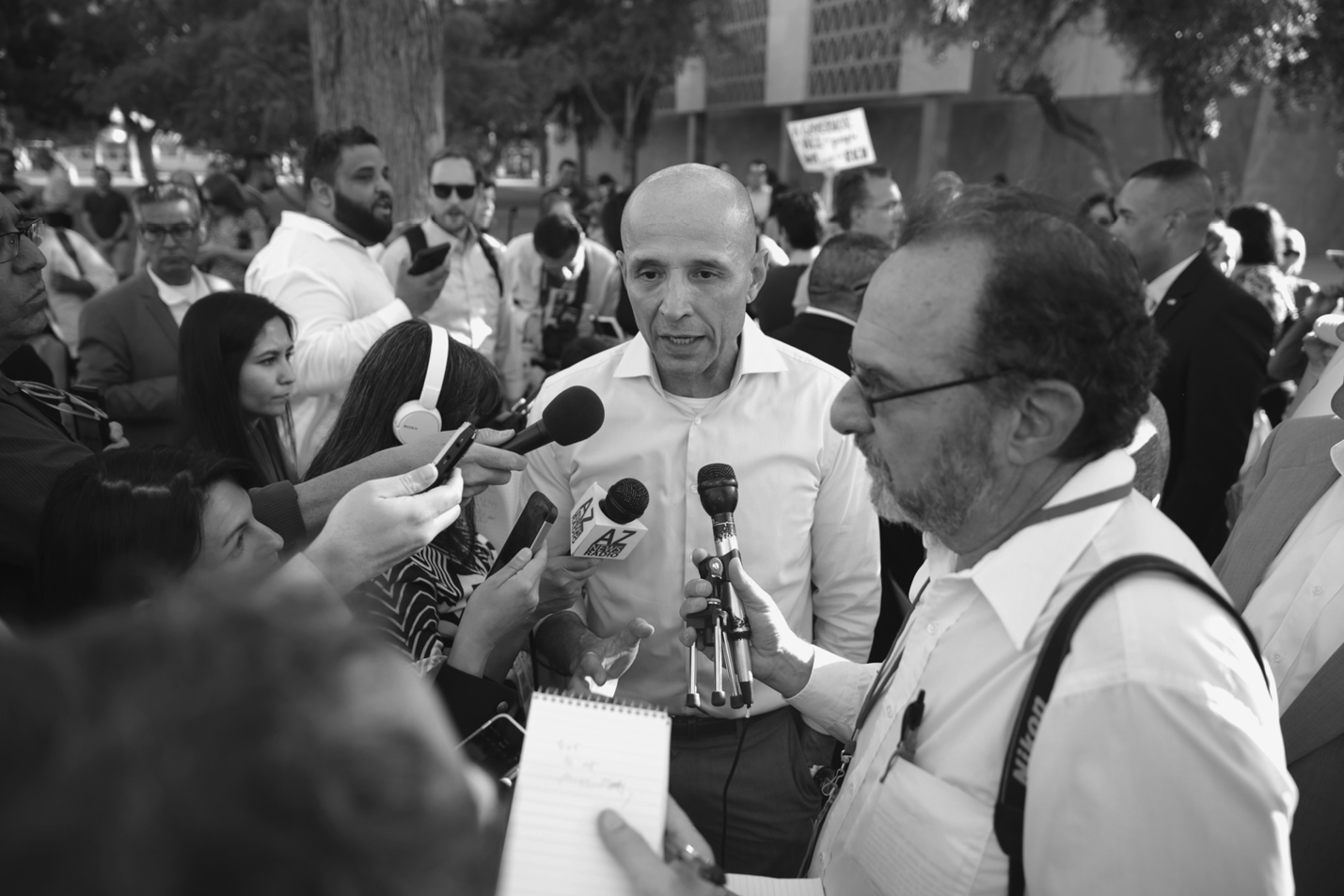 It washes over us, seemingly all day every day. We live in the Digital Age, or the Information Age, or the Computer Age (heaven forbid there’s a Power OutAge …). Smart phones are omnipresent, flat screen TVs are in all kinds of public spaces, computers seem to be everywhere, and they’re all transmitting impossibly vast amounts of information, entertainment, images, sound, video and such. But for those seeking to stay informed about current events amidst this tsunami of stuff, what qualifies as actual news? What information can be trusted?

The term “fake news” has gained currency in recent years, first referring to material made up or greatly exaggerated by individuals and websites to generate viewer traffic, and more recently applied by politicians and other public figures to reports they disagree with or media outlets they don’t like. To confuse the two—with one created specifically to deceive, while the other simply containing unflattering information—is massively upsetting to those who gather news for a living.

“I would say one of the more damaging phenomena has been this notion of ‘fake news’,” says Devin Fehely, an award-winning local television reporter. “We often hear it as a jab … Any reporting with which you disagree, any set of facts with which you disagree, anything that doesn’t neatly conform to your worldview sometimes has been unfortunately put under the umbrella of fake news. And sometimes I think people say it with a nod and a wink, but I think that this notion is much more pernicious and much more corrosive. Because when there is real and consequential reporting on something, there’s going to be a segment of the population that is going to be resistant to whatever that new information is.”

“Whenever anyone mentions ‘fake news’ it makes me almost apoplectic with disappointment, despair and rage,” says Kevin Fagan, who reports on homelessness for the San Francisco Chronicle. “It’s an insidious attack that’s been happening for the last 30 years in my experience from (both) right wing and left wing people who don’t want truth-tellers.”

Professional journalists—those who work full time or part time for media outlets that disseminate news—see themselves in the business of analyzing and debunking false information, as well as verifying and reporting facts and stories that their communities might find useful.

“We pride ourselves on calling balls and strikes,” says Juju Chang of ABC’s Nightline. “We like to see ourselves as a neutral arbiter of power and how it is wielded. We often think of ourselves as in a position of speaking truth to power and standing up for the little guy in a power situation. So politically it is anathema to us to be seen as any way partisan. We go out of our way, that even as norms are being broken around us, we try to maintain ours in terms of objectivity and fact-checking reporting.”

Of course there are vocal critics of this, and in today’s polarized political environment, it seems like everyone is accusing everyone else of bias or dishonesty or ←2 | 3→favoritism. Add social media to the mix and it can seem like our entire society is screaming at each other.

“I think that particularly young readers … may not understand the difference between getting filtered and objective information and unfiltered propaganda because they can look similar,” says Gerald Seib of the Wall Street Journal. “That’s a real danger to society, I think.”

Good journalism is also not limited to large, well-known news outlets. Virtually all top-notch reporters got their start at smaller outlets and rose to prominence through the same persistence and determination they would later show on a larger stage. The highest honor in journalism, the Pulitzer Prize, bears this out. In 2017, the Pulitzer for editorial writing went not to any of the nationally-known columnists at big-city outlets, but to Art Cullen of the Storm Lake Times, a bi-weekly Iowa newspaper with a circulation of slightly more than 3,000 in a city of roughly 10,000 residents. That same year, Eric Eyre of the Charleston, West Virginia Gazette-Mail won the coveted investigative reporting Pulitzer for a newspaper with a daily circulation of roughly 40,000 in a city of 47,000 residents. A few years earlier, Sara Ganim won the Pulitzer for local reporting for a story she started working on as a college student at Penn State.

Richard Craig is a professor at San Jose State University. An award-winning journalist and author, he has written three previous books and numerous academic articles. His writings have appeared in news outlets nationwide and worldwide. Craig earned a Ph.D. from the University of Illinois in 1995.