Animals are everywhere. They inhabit our forests, our fields, our imaginations, our dreams, and our stories. Making appearances in advertisements, television programs, movies, books, Internet memes, and art, symbolic animals do tremendous work for us selling goods, services, and ideas, as well as acting as stand-ins for our interests and ideas. Yet, does knowing animals only symbolically impact their lived experiences? Seeing Species: Re-presentations of Animals in Media &amp; Popular Culture examines the use of animals in media, tracking species from appearances in rock art and picture books to contemporary portrayals in television programs and movies. Primary questions explored include: Where does thinking of other beings in a detached, impersonal, and objectified way come from? Do the mass media contribute to this distancing? When did humans first think about animals as other others? Main themes include examining the persistence of the human-animal divide, parallels in the treatment of otherized human beings and animals, and the role of media in either liberating or limiting real animals.
This book brings together sociological, psychological, historical, cultural, and environmental ways of thinking about nonhuman animals and our relationships with them. In particular, ecopsychological thinking locates and identifies the connections between how we re-present animals and the impact on their lived experiences in terms of distancing, generating a false sense of intimacy, and stereotyping. Re-presentations of animals are discussed in terms of the role the media do or do not play in perpetuating status quo beliefs about them and their relationship with humans. This includes theories and methods such as phenomenology, semiotics, textual analysis, and pragmatism, with the goal of unpacking re-presentations of animals in order to learn not only what they say about human beings but also how we regard members of other species.

Figure 1.1: The Great Chain of Being.

Figure 4.2: A Distinguished Member of the Humane Society.

Figure 9.1: “Not the Least Obeisance Made He.” Gustave Doré illustration for the 1884 edition of The Raven.

The very act of treating people like animals, would lose its meaning if animals were treated well.

Before we can determine how to best treat animals, we must first change how we view them.

The more clearly we see the difference between animals and stones or machines or plastic dolls, the less likely it seems that we ought to treat them the same way.

Auschwitz begins whenever someone looks at a slaughterhouse and thinks: they’re only animals.

“I don’t see anything I like,” said the visitor to the humane society cattery where I volunteer. On this busy Saturday a gray-haired older gal was looking to adopt a senior male cat, which was encouraging since most people want kittens. And yet her parting words stayed with me. It was the use of the word “thing,” rather than “anyone,” that made me uncomfortable, as this objectification so precisely represents many people’s beliefs about animals.1 “I don’t see anyone I like” would have left me sorry to see her go without a feline companion. The ontological difference is critical to how, when, and if we regard other species as subjects, not objects, as co-participants on the planet. Her languaging should have come as no surprise as anthropocentrism (the belief that humans are the center of the universe with higher moral status and value) is deeply entrenched in America’s cultural, economic, political, and legal structures. For example, under U.S. law, domestic animals2 are considered things; they are classified as property, along with land, cars, houses, and other objects. Where does our thinking of other beings in this detached, impersonal, objectified way come from? Do the mass media contribute to this distancing? When did humans first think about animals as other others? These are questions explored in this book, which has two major themes: first, that classification and representation matter, and second, representation (later written as re-presentation) has implications for and effects on animals and our lives.

The first theme is addressed through an exploration of what is called the human/animal divide, which can be defined as the process of binary classification systems in Judeo-Christian Euro American thought. This eternal and persistent division is expressed in culturally different ways of thinking about animals and multiple methods of re-presenting of them in media and popular culture. Re-presentations include an examination of the underlying psychological processes to Other construction, recognition of the importance of re-languaging and re-imagining how, when, and if we refer to animals other than humans. Through an inter- and multi-disciplinary approach to thinking about animals and their representations readers have the opportunity to examine deep-seated cultural and personal beliefs about our relationships with animals and theirs with us. By this process each reader is encouraged to consider their own questions about animal rights,3 respect, and responsibility. This book is ← xiv | xv → not meant to be indoctrination into my way of viewing our relationships with animals, rather, is intended to function as a form of media literacy by pulling back the curtain on what is concealed behind contemporary re-presentations of animals and actual practices. For we know that

Cultural assumptions about nonhuman animals and their moral status relative to humans are as deeply ingrained as any. The long-standing belief that human beings are superior to nonhuman animals and occupy a privileged place in the moral order remains one of the prevailing dogmas of the day. (Engel & Jenni, 2010, p. 60)

The idea that animals should be thought of not only as species with their own interests, desires, preferences, and lives, but also as individuals who do so, is a radical concept in some quarters. The belief that animals are members not only of a species, but also are individuals was first brought to the forefront of global scientific and popular attention in the late 1950s with the work of a young English scientist, Jane Goodall, who studied chimpanzees in the Gombe Stream National Park in the East African nation of Tanzania. At that time, Goodall challenged scientific norms by naming chimpanzees (Pan troglodytes), rather than simply assigning them numbers. She recognized and recorded the life ways of individuals such as David Gray Beard, Flo, Fifi, and Passion. Furthermore, she disrupted what human beings had long believed about themselves: that they were the only toolmakers or users. “It was hard for me to believe,” she recalls. “At that time, it was thought that humans, and only humans, used and made tools. I had been told from school onwards that the best definition of a human being was man the toolmaker—yet I had just watched a chimp toolmaker in action. I remember that day as vividly as if it was yesterday” (qtd. in McKie, 2010). The chimps’ and Goodall’s stories gained international attention in part through the cover story of the December 1965 issue of National Geographic magazine (See Figure 0.1).

This was followed that same month by a television special that gave viewers a nudge down the path of recognizing the urgent need for empathetic engagement with other species. Dr. Goodall’s work was made visible by who she is and what she was doing, a young female scientist embedded in a community of chimpanzees. The exposure was heightened as well because the 1960s was a time when television specials and ← xv | xvi → magazines had tremendous visibility and less competition from other forms of communication.4 It was in fact through the media that Goodall’s twin passions for Africa and for chimpanzees were born, “I got my love of animals from the Dr. Doolittle books and my love of Africa from the Tarzan novels,” she says. “I remember my mum taking me to the first Tarzan film, which starred Johnny Weissmuller, and bursting into tears. It wasn’t what I had imagined at all” (qtd. in McKie, 2010). 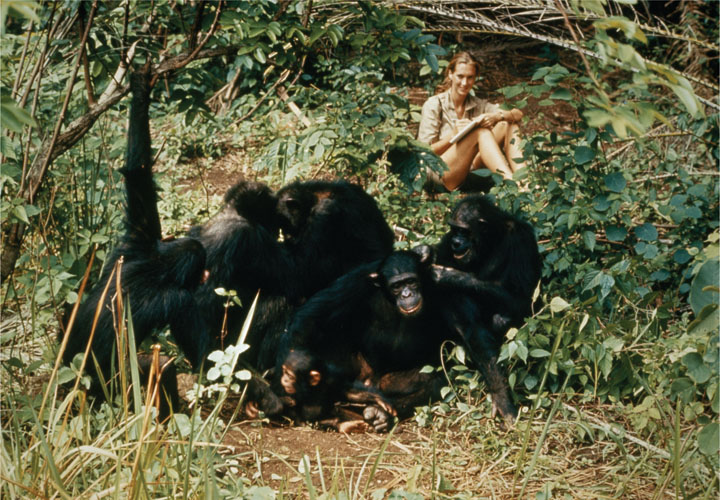 The second theme of this book is the implications of media and popular culture re-presentation (language and images) on animal’s lived experiences. Media and other social institutions use animals and animality to educate and enrich, however they are also used to advance economic and ideological interests. Typically, animals are thought of more by what they mean to us, in utilitarian, nutritional, and experimental terms. Yet science and personal experience demonstrate that they are more than that. I contend that advertising, news, cinema, television programs, and the Web are carriers of deliberately constructed messages that use animals and their images in ways that directly and ← xvi | xvii → indirectly impact their lives. This is complicated by the fact that animals are included in advertising and programming that often has nothing to do with real species. These portrayals come to seem normal and natural, creating a kind of “truth” that serves human interests. In the words of Stuart Hall, re-presentations become narrowed to mean only one thing, they become “naturalized” and closed. Thus

Debra L. Merskin (PhD, Syracuse University) is Professor of Media Studies in the School of Journalism &amp; Communication at the University of Oregon. Her research focuses on the role of media in obscuring or revealing voices and faces of those who are otherized by mainstream American culture.