Hungarian as a Pluricentric Language in Language and Literature 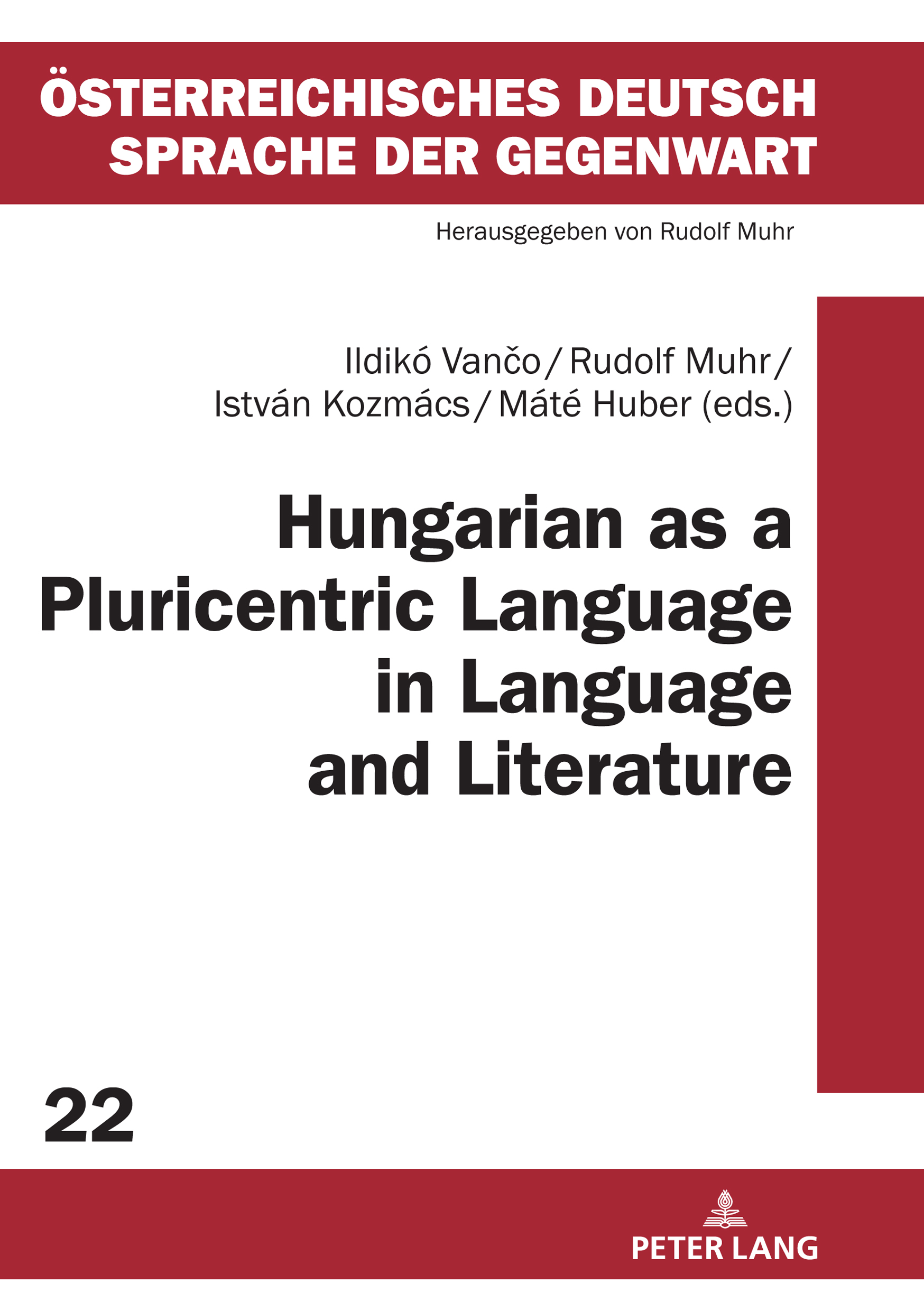 Hungarian as a
Pluricentric Language
in Language and Literature

This publication has been published with the financial support of the
following institution: Hungarian Academy of Sciences

Prof. Dr. Rudolf Muhr is the head of the Austrian German Research Centre in Graz and the coordinator of the International Working Group on Non-dominant Varieties of Pluricentric Languages (WGNDV).

Máté Huber is a PhD student at the English Applied Linguistics PhD program at the Institute of English and American Studies of the University of Szeged, Hungary.

This volume comprises 19 papers that were presented at the “6th World Conference of Pluricentric Languages and their non-dominant Varieties”, organized by the “International working Group on Non-dominant Varieties of Pluricentric Languages” (WGNDV). The overall theme of the conference was“Pluricentric Languages in Europe in Contact and Conflict”. It was held at the Constantine the Philosopher University in Nitra (Slovakia) on June 21–23 2018. This is second of two volumes of papers that are the outcome to the conference. It only collects papers about the pluricentricity of Hungarian and for the first time gives an exhaustive overview about the complex situation of this language.

The authors of the papers of this volume come from five countries (Hungary, Romania, Slovakia, Slovenia, Ukraine), where Hungarian is either the national language (Hungary) or (only) a recognized minority language even though it can be considered as a regional language in Romania and Slovakia because of the large number of its speakers.

The first section of the book comprises six papers that try to give a foundation to the concept of Hungarian as a pluricentric language. The first paper by Máté Huber gives an extensive overview the development and the history of the pluricentricity of Hungarian. The author points out that the prevailing language ideology of Hungarian is that of the cultural nation and not of a state nation. The specific mother tongue constitutes the identity of individuals and ethnic groups and not the adherence to a specific nation. This leads to the use of the term “Hungarian nationality” for the members of the Hungarian minority in the neighboring nations of Hungary and causes confusion as it challenges the unity of the respective nations. In the western European countries, the term “nationality” is reserved for the membership in a particular nation and not in one of its ethnic groups. The identity concept based on ethnicity is prevailing in Eastern European countries and one of the reasons why the concept of pluricentricity is met with reservation as it this concept is based on the concept of state nations. Ildikó Vančos’ paper presents empirical data in this respect about the linguistic and national identity of the speakers of the Slovakian Hungarian variety. It shows that the majority of speakers consider themselves speakers of Slovakian Hungarian and as citizens of Slovakia. The paper of Miklós Kontra urges for linguistic rights for speakers of non-dominant varieties of pluricentric languages in neighboring countries of Hungary where Hungarian is denied sufficient linguistic rights in some countries.

The second section of this volume assembles papers that deal with a multitude of specific problems and conflicts that complicate the lives of Hungarian speakers in the non-dominant varieties of Hungarian. The paper of Réka Máté and István Csernicskó deals with the complications that exist in the formation of family names (patronymics) for Hungarian speaking Ukrainians where the system of Slavic languages hits upon the system of Hungarian name formation with the effect (among others) that out of six possible name forms only three can be registered by law. János Bauko reports on the same topic but on the formation of person names for Hungarian speaking Slovakians who are able to use the Hungarian and Slovak proper name forms in accordance with the given communication situation; or Slovak name forms might also appear in the Hungarian-speaking context, and the Slovak-speaking context might include Hungarian name forms. Gizella Szabómihály paper goes into the use and formation of Hungarian toponyms in Slovakia, which have been changed four times since the end of the 19th century leading at present to the existence of at least two standardized Hungarian allonyms that cause conflicts and confusion. Two more papers deal with the form and terminology of administrative texts. Attila Benő deals with the difficulties of terminology planning for Hungarian in Romania shown on the example of terms used in education, administration, in healthcare and for the ranks of police that in many cases do not exist in Hungarian Hungarian as neologisms have been created. This is also the case in Slovakian Hungarian administrative texts of self-governing bodies, which have been researched by Károly Presinszky who also reports the influence of spoken language in these texts.

In the fifth section, three papers discuss the effect of the pluricentricity of Hungarian in education. István Kozmács and Ildikó Vančo researched the Hungarian language in textbooks published in Hungary and found that these textbooks ignored the existence of the other national varieties of Hungarian. Edit Kádár reports on the effects on language teaching of the new competence centered curriculum that has been introduced in Romania in 2017 in secondary education. The author pleads for favoring the visibility of these varieties and supporting the contrastive and comparative approach in the process of language awareness development. István Jánk conducted a large-scale research on the attitudes of teachers of Hungarian in four countries on the use of non-dominant varieties in education. The data supported the fact that linguistic discrimination is largely present in teacher’s pedagogical evaluation of students whether they use the dominant or the non-dominant variety.

In the fifth section, there are four papers about the effect of pluricentricity on the situation and style of Hungarian literature that is produced in the national varieties of Hungarian. It is the first time that this aspect has been researched. Zoltán Németh analyses literary works of fourteen authors in which Hungarian as a pluricentric language is applied as a strategy of transculturalism. Gabriella Mádi researches the effects of language contact in Éva Berniczky’s novel Méhe nélkül a Bába. Similarly, Gabriella Petres Csizmadia paper analyses the language use of Pál Száz’s work. Anikó Tóth reflects on features of pluricentricity and transcultural phenomena in György Norbert’s novel Klára.

The editors would like to thank the authors for their contributions and the reviewers for their effort and their valuable input that helped to improve the publication.

I   Hungarian as a pluricentric language

Wanted: linguistic (human) rights in the study of non-dominant varieties of pluricentric languages

Investigating the Slovakia Hungarian variety as a factor of identity formation

II   The effects of pluricentricity on administrative terminology, toponyms and family names

Contact phenomena in the use of personal names of Slovakia Hungarians

Hungarian toponyms in Slovakia – a source of conflict

Dr. habil. Ildikó Vančo, PhD, and Dr. habil. István Kozmács, PhD, are fac-ulty members of the Institute of Hungarian Linguistics and Literary Science at Constantine the Philosopher University in Nitra, Slovakia. Prof. Dr. Rudolf Muhr is the head of the Austrian German Research Centre in Graz and the coordinator of the International Working Group on Non-dominant Varieties of Pluricentric Languages (WGNDV). Máté Huber is a PhD student at the English Applied Linguistics PhD pro-gram at the Institute of English and American Studies of the University of Szeged, Hungary.