As the first legal history of Switzerland in English, this seminal work presents the legal development in the territory of today's Switzerland. Until 1798, the Swiss Confederation consisted of a conglomerate of around 50 local authorities with different constitutional statuses. The number of legislative jurisdictions was even greater; each territory, however small, had its own legal system before 1798. In the 19th century, legal unity was initially created within the framework of cantonal law and, since 1848, at the national level. Key developments of the 20th century were equality between men and women, social legislation and the influence of technological development.
The focus of the book is on constitutional history, legal sources and legislation, court proceedings and jurisprudence. It also presents the political, economic and social backgrounds of legal developments

Part 1: The Roman and Frankish Period

Just before the Christian era, the territory of today’s Switzerland was integrated into the Roman Empire. It was inhabited at this time by different tribes: the Celts, the Rhaetians, and the Lepontians. The Lepontians settled mostly south of the Alps, in the Ticino and the Rhaetians in the Grisons valleys. The rest of the various Celtic tribes lived in other parts of today’s Switzerland: the tribes of the Uberi, the Seduni, the Veragri, and the Nantuates settled in the Valais; on the western tip of Lake Geneva the Allobroges and the Rauraci in the Basel region. The largest Celtic tribe, the Helvetii settled in the Swiss plateau (Mittelland). These Celtic tribes had no common political organisation but lived as largely autonomous communities.

Historical research only has a fragmentary knowledge of these different tribes, especially of the smaller ones. This is mainly related to the lack of records. The Celts, whose culture dates back to the 5th century BC, were not completely illiterate and knew a script. However, they left few written documents and in particular no historiography of their own. Historical knowledge about them originates from historically not quite reliable reports of Roman and Greek authors, as well as from archaeological findings, from inscriptions and linguistic research. In particular, the law of the Celtic tribes is mostly unknown. Only for the Helvetii, some significant statements are possible in this respect, which is why they are focussed on separately.

The main source of historical knowledge about the Helvetii is the work “Commentarii de bello gallico” – Comments on the War in Gaul. It was a kind of accountability report to the Senate in Rome, in which Julius Caesar reported on his successful subjugation of the Celts as a Roman proconsul in the years 58 to 52 BC. Caesar, like other Roman authors, identified the Celts as Gauls. In the first book, he reported on his military campaign against the Helvetii, whose settlements he described as follows: “on the one side is the Rhine river, ←17 | 18→on the other the Jura heights, and on the third the “Lemannic lake” (today’s Lake Geneva) and the Rhone river”. He did not mention the southern border, the alpine ridge, which he presumed to be well known. Caesar pointed to the natural boundaries, which much later became political boundaries. Even though the concept of modern Switzerland cannot be applied to the days of Ancient Rome, there was some continuity in the geographic demarcation of the territory. 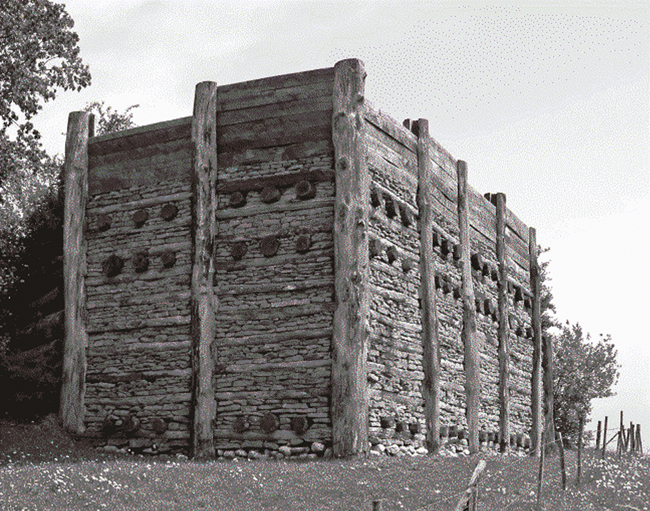 Reconstruction of the defensive wall of a Helvetian settlement on the Mont Vully in the canton of Freiburg. Photo: Author

The Helvetii lived in clans, that is, in large family units. The nobles and the druids occupied the leadership functions in these clans. The nobles owed their political influence to their social standing, which was based on the number of subjects and slaves dependent on them. The Helvetii were not egalitarian people, but ←18 | 19→adhered, like other Celtic tribes, to a sort of aristocracy based on allegiances. The druids performed religious functions but were also involved in public and private dispute settlements. They settled boundary- and inheritance-disputes and passed verdicts on criminals. Their reputation as religious leaders also gave them the authority to decide on legal issues, a phenomenon that can be found in other early cultures.

In his work, Caesar reports on the 12 oppida (fortified towns) and the 400 villages of the Helvetii. The oppida were larger settlements, fortified by protective ramparts; they were the political, economic, and religious centres of the clan. The interior area of the oppida was only to a small extent permanently populated, because their real purpose was to enable the population living in the surrounding area to retreat behind these fortifications in times of war. Today only a few oppida can be archaeologically identified beyond doubt; like the ones on the Enge peninsula near Berne, at the loop of the Rhine near Altenburg-Rheinau and on Mount Vully between Lake Morat and Lake Neuchâtel.

In 58 BC a large part of the Helvetii decided to leave their settlement area and to move westwards in search for better new livelihoods. It is also possible that their ancestral habitat between the Jura heights and the Alps might have turned out to be too small due to the influx of Germanic tribes. Before their exodus, they destroyed their settlements and part of their supplies. Since Caesar was anxious to prevent this exodus and negotiations failed, the battle of Bibracte (probably near today’s Montmort in the French department of Saône-et-Loire) was fought from which the Romans emerged victoriously. Caesar forced the Helvetians to return, whereby today’s Swiss Plateau (Mittelland) fell under Roman rule, and in the subsequent period belonged to the province of Gallia in the Roman Empire.

The integration of the territory of today’s Switzerland into the larger structure of the Roman Empire had already begun before the Battle of Bibracte. In the second century BC, the regions of the south Ticino and Lake Geneva had been integrated into the province of Gallia. With the establishment of two ←19 | 20→colonies (Colonia Iulia Equestris near today ‘s Nyon in 45/44 BC and Augusta Raurica near today’s Augst in 44 BC) and with the final conquest of the Alps by Augustus (25 to 13 BC), the integration was completed. In the time around the Birth of Christ, the territory of today’s Switzerland was completely under Roman rule. 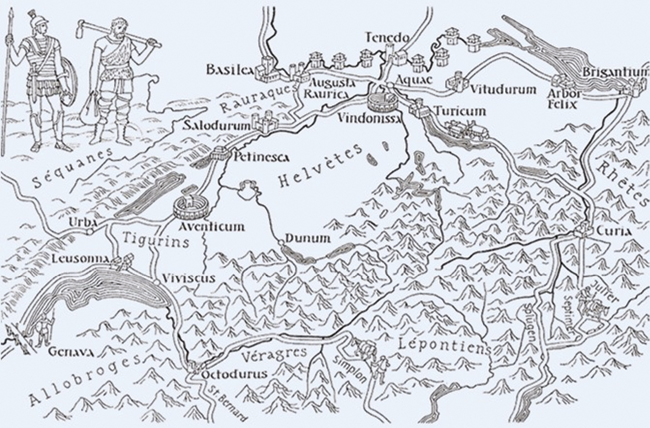 Acculturation (social and cultural integration) by the Romans took place during the first three centuries AC, and not only by military means but also in the political and cultural realm. The Celtics along with the immigrating Romans formed the majority of the population and became later the “Gallo-Roman”. Increasingly more people lived according to Roman law, were involved in the Roman state and administrative structures, paid homage to the Roman gods, traded with Rome, calculated with the Roman numerical system and spoke beside the Celtic colloquial language also Latin and learned to write. In the countryside, large estates (villae) based on the Roman model were introduced as a new operational way of farming, hitherto unknown crops were cultivated and new livestock bred. So as a new form ←20 | 21→of settlement, especially in the west of today’s Switzerland, the city became more and more important. In historical research, Romanisation is often referred to as a process of urbanisation. However, the intensity of Romanisation needs to be differentiated: It was deeper for urban residents than for rural residents. In many places, the Celtic culture survived not only in religion, art, and architecture but also in names of persons and places. In many realms, the Celtic culture also influenced Roman culture. 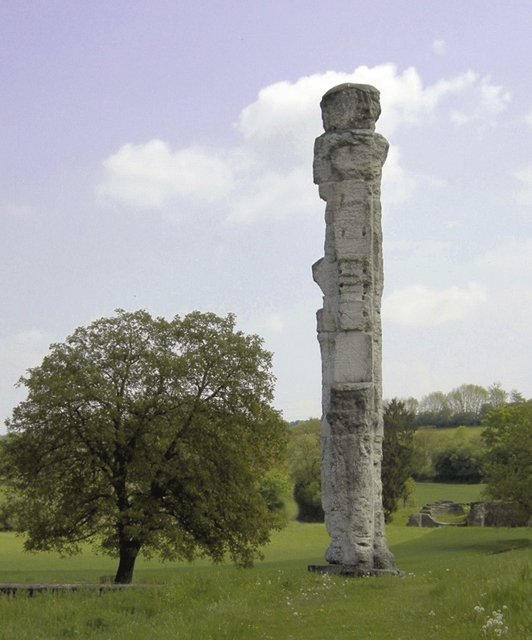 The “Stork’s Column.” Remains of a Roman temple in Avenches. Until 1978, the column served as a nesting site for storks. Photo: Author

René Pahud de Mortanges is Professor at the Faculty of Law at the University of Fribourg, Switzerland, where he teaches legal history, state-religion relation-ships, religious laws and constitutional law. He also serves as Director of the Institute of Law and Religion, and as Co-Director of the Center of Islam and Society, both at the University of Fribourg, and is Research Fellow at Renmin University in Bejing and Guest Professor at ECUPL in Shanghai. He is editor of the collections Freiburger Veröffentlichungen zum Religionsrecht and Europäische Rechts- und Regionalgeschichte.