Leadership in organizations has become a significant topic in scientific research over the last few decades. As businesses continue to expand their operations beyond their home countries, the topic of attracting, maintaining and developing people who can successfully perform in global environment is receiving more and more attention. It’s important to acknowledge that people from different cultural backgrounds have different expectations of what leadership looks like in various national and organizational contexts, e.g. in public institutions, in multinational companies or in higher education.
By way of illustrating the challenges of leadership, this book will examine several issues related to individual perspective of leadership (competencies and attributes of leaders), mezzo/institutional perspective (leaderless organizations, leading public institutions, leaders of higher education, expatriates on foreign assignment) and macro/national perspective (European and Chinese cases).
This book is a result of the collective efforts of thirteen scholars representing different universities and it is aimed at academics, students, managers and entrepreneurs engaged in intercultural interactions.

Preparation of this chapter was financially supported by grant BST/WROC/2017/A/02. Correspondence concerning this chapter should be addressed to Dariusz Dolinski, SWPS University of Social Sciences and Humanities, Faculty of Psychology in Wroclaw, ul. Ostrowskiego 30B, 53-238 Wroclaw, Poland. E-mail: ddolinsk@swps.edu.pl.

Abstract: This chapter depicts six rules of social influence, proposed by Robert Cialdini, and confirms they can be applied to different areas in management. It also analyses the seventh rule of influence, called “unity” or “Power of We” and proves its presence in organizations. The paper provides conditions that make it more likely for the rule to occur and clarifies the role of cultural impact in it.

Robert Cialdini proposed six universal rules of social influence that can be useful in various related fields, including in other-oriented activities of a manager. In his most recent book titled Pre-suasion, Cialdini elaborates his theoretical proposition with the addition of a seventh rule that he calls the “Power of WE.” The authors of the present chapter present their considerations concerning the role of this particular rule in the activities of a manager, and they also give consideration to the role of the culture in which such activities are conducted. They conclude that paying heed to knowledge from the field of psychology can be very helpful in optimizing processes of people management, but the cultural context in which those actions are to be taken should always be given proper consideration.

With the 1985 publishing of his book Influence. The Psychology of Persuasion, Robert Cialdini – a professor at Arizona State University – became one of the most influential scholars not only in the field of psychology, but also in other areas of science (primarily marketing, sociology, and political science). It also rapidly turned out that the theoretical proposal he offers in that book can be of exceptional usefulness in the field of management. This book, which has ←13 | 14→been translated into dozens of languages and has sold over 3,000,000 copies worldwide, introduced a new and unusually catchy classification of social influence rules. While it was grounded firmly in science and built around a solid scientific methodology, it was written in exceptionally simple language. Cialdini succeeded in avoiding both scientific psychological jargon and trivialization of the issue presented. This led to the book achieving immediate popularity among practitioners-managers, individuals in charge of groups of people, or more generally anyone who deals with other people in their line of work. What is more, this book, despite the over three decades that have passed since it was published, remains the first piece of literature introducing psychology to these practitioners, and is continually reprinted and read (Cialdini, 2007).

In his book Cialdini advances the rather surprising hypothesis that the vast majority of the diverse techniques effective in influencing other people operate based on the activation of one of six fundamental psychological mechanisms (or combinations of those mechanisms) (see Fig.1). What is the strength and appeal of these “Six powers of influence?” It would seem that the primary answer is their intuitiveness and simplicity. Discussing each of the six rules in turn, Cialdini points out the scientific bases of their effectiveness, but also presents a range of examples, frequently anecdotal, of their practical application. We shall take a closer look at them, although we will not describe them in great detail, as interested readers can easily learn more from Cialdini’s original book (if they have not done so already, which seems more than unlikely) or the numerous treatments of the issue already published. Our objective is rather to present a certain starting point for further considerations of the usefulness and universality of some of those rules (and their contemporary implications) in the daily work of a manager. 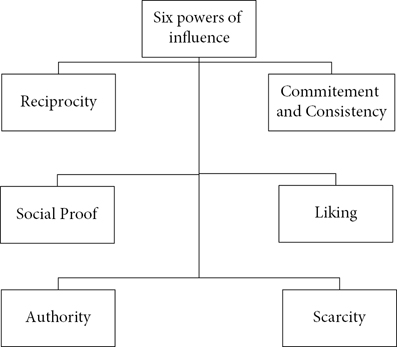 This rule states that people strive for symmetry in interpersonal relations, and if they receive some good from another person, they feel obliged to reciprocate. Thus, if you wish to boost the chances that your request will be fulfilled (doing a task, achieving a goal) by a particular person, you should first do something for the benefit of that individual. For example, you should be considerate, or give them a small gift, etc. Such an action evokes in your interlocutor a feeling of obligation to return the consideration, and there is a greater chance they will do what you ask of them. This is precisely why people who receive a small piece of cheese to sample from a hostess then accede to her request to purchase a pound of that ←14 | 15→same cheese, or an upset and irritated customer who encounters a pleasant salesperson also becomes pleasant and courteous.