East-West Dialogues: The Transferability of Concepts in the Humanities

This is an edited collection of essays drawn from collaborative events organized jointly by The Chinese University of Hong Kong and Ludwig Maximilian University of Munich. The book focuses on how literary and cultural perspectives from different humanities academic environs in Asia and Europe might contribute to our understanding of the "transferability of concepts." Exploring ways in which these traditions may enter into new and productive collaborations, the book presents readings of a wide range of Western and Eastern writers, including Shakespeare, J.M. Coetzee, Yu Dafu. The book contains a virtual round table followed by four thematic sections – "Travels and Storytelling," "Translation and Transferability," "Historical Contexts and Transferability," and "Aesthetic Contexts and Transferability." 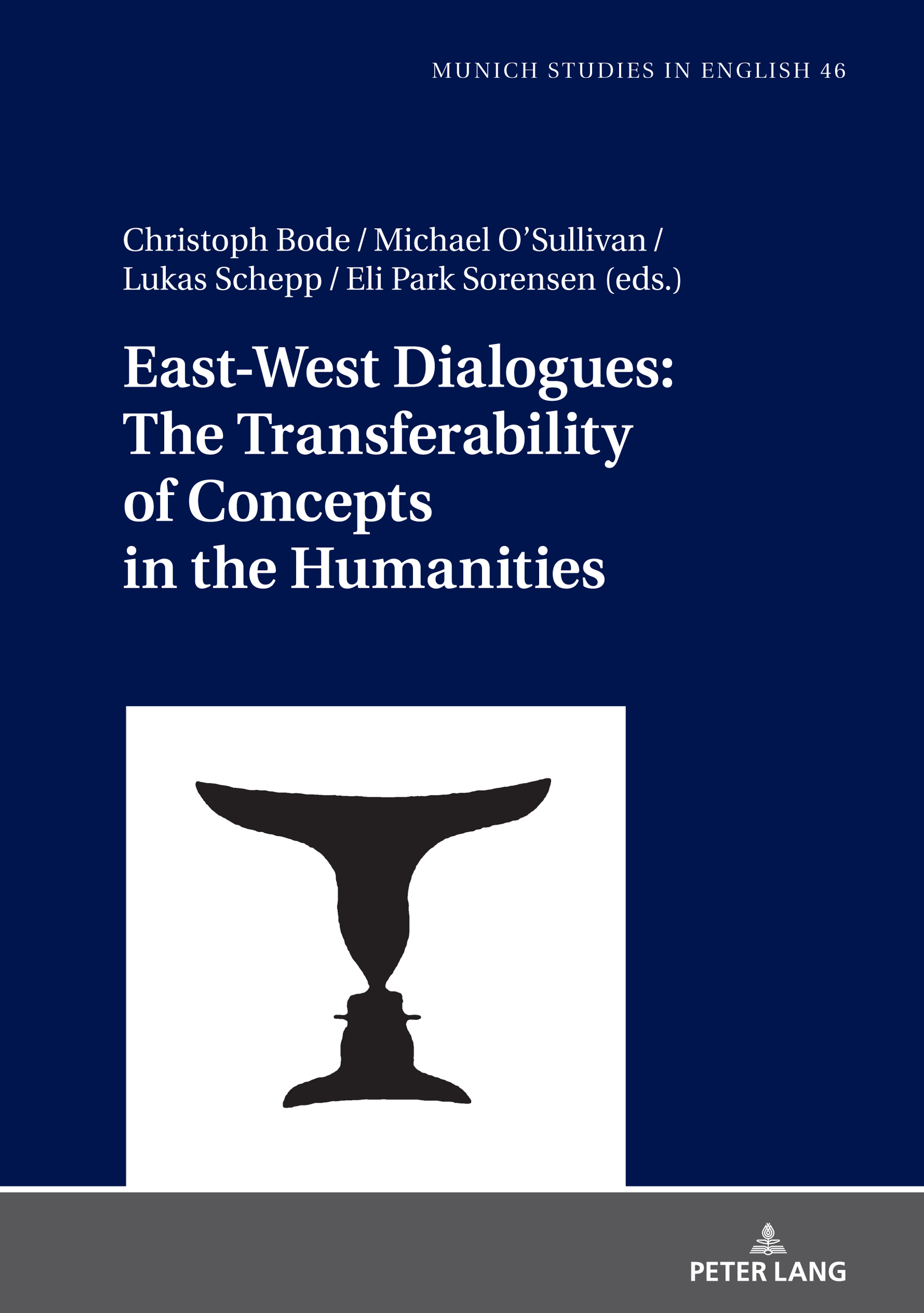 East-West Dialogues:
The Transferability of
Concepts in the Humanities

Christoph Bode was Chair of Modern English Literature at LMU Munich until March 2018 and Visiting Professor at the University of California, Los Angeles in 1997 and at UC Berkeley in 2012. He has published 28 books and some 80 scholarly articles, most of them in romanticism, twentieth-century literature, travel writing, poetics, and critical theory.

Michael O’Sullivan is an associate professor at the Department of English in the Chinese University of Hong Kong. He has taught literature and language for universities in Ireland, the UK, the US, Japan, and Hong Kong. He has published 12 books.

Lukas Schepp is a PhD candidate at LMU Munich. He specializes in film and media studies, interdisciplinary studies, and philosophical approaches to literature and film. He has both published scholarly articles and written screenplays for German TV channels.

Eli Park Sorensen is an assistant professor at the Department of English in The Chinese University of Hong Kong. He specializes in comparative literature, postcolonial thought, literary theory, and cultural studies.

East-West Dialogues:
The Transferability of Concepts
in the Humanities

This is an edited collection of essays drawn from collaborative events organized jointly by The Chinese University of Hong Kong and Ludwig Maximilian University of Munich. The book focuses on how literary and cultural perspectives from different humanities academic environs in Asia and Europe might contribute to our understanding of the “transferability of concepts.” Exploring ways in which these traditions may enter into new and productive collaborations, the book presents readings of a wide range of Western and Eastern writers, including Shakespeare, J.M. Coetzee, Yu Dafu. The book contains a virtual round table followed by four thematic sections – “Travels and Storytelling,” “Translation and Transferability,” “Historical Contexts and Transferability,” and “Aesthetic Contexts and Transferability.”

Introduction: East-West Dialogues on the Humanities

Katharina Pink: The Centers Cannot Hold: Cross-Cultural Narratives of Travel in the Age of Globalization

Reto Winckler: The Tragedy of Errors? East-West Migrations in Shakespeare’s The Comedy of Errors and Our Own Time

Lukas Schepp: From Page to Screen: Kubrick’s Ambiguous Translation of Thackeray’s The Luck of Barry Lyndon

Julian Lamb: Towards a Grammar of “Seems” in Hamlet

Chloe Leung: “It was one’s body feeling, not one’s mind”: A Pas de Deux for Virginia Woolf’s To the Lighthouse and the Russian Ballet

Lukas Schepp: Identity and Consciousness in Charlie Brooker’s Be Right Back

Introduction: East-West Dialogues on the
Humanities

Representatives from the Departments of English of The Chinese University of Hong Kong (CUHK) and the Ludwig Maximillian University of Munich (LMU) came together for the first time at the Third Scientific Forum hosted by LMU on Oct. 27–29, 2017. The welcoming addresses by Prof. Dr. Bao Yan, entitled “Bridging the Gap between Art and Science: Differences in Aesthetic Appreciation of Eastern and Western Visual Art” and by Prof. Dr. em. Ernst Pöppel, entitled “Bridging the Gap Between Art and Science: The 3-second Time Window in the Aesthetic Appreciation of Poems” clearly emphasised the theme of bridging the gap between different disciplines and it is a theme our colleagues in English at CUHK and LMU carried over into our reflections on one of the guiding themes of this collection, the transferability of concepts.

We followed up the Forum at LMU with a joint conference on “Narrative and Cross-cultural Humanities” hosted by the English Department of CUHK from 2–5 May, 2018. Covering all areas of English studies including literary studies, linguistics and language learning, this conference situated the concept of narrative in a global cultural environment. This “East-West” collaboration between The Chinese University of Hong Kong and the Ludwig Maximillian University of Munich also enabled us to return to story to enhance our cross-cultural humanities awareness. The conference on cross-cultural humanities perspectives on narrative covered narrative’s cognitive, linguistic, affective and literary-historical dimensions. A further conference collaboration then took place at Peking University in November 2018, this time involving speakers from the Departments of English at LMU, CUHK and hosted at Peking University. The theme of our workshop was ‘The Problem of Transferability of Key Concepts in the Humanities’ and it was chaired by Professors Christoph Bode and Jason Gleckman. Prof. Bode spoke on ‘The Problem of Transferability of Key Concepts in the Humanities: “Romanticism” as a Test Case’ and Prof. Gleckman on the ‘Transferability Between Theology and Literature: The Protestant Reformation and Shakespeare’.

We have been conscious of the need to document some of our talks, round tables and discussions at these events over the last 3 years. The conferences have brought together a large group of colleagues, at junior, mid-career, and senior levels who share an interest in the value of collaborative, cross-cultural research in the humanities. In fact, some of those who contributed — Profs. Bode, Zhang and Lee — might be regarded as having helped shape the direction of cross-cultural and cross-disciplinary research in the humanities, and between the sciences and the humanities, over the last number of decades. Our collection arrives at a time when there has been a great deal of scaremongering in the popular press and in trade publications in the general field of East-West studies. Recent publications by western commentators such as The Retreat of Western Liberalism, The Fate of the West: The Battle to Save the World’s Most Successful Political Idea and Easternisation: War and Peace in the Asian Century like to remind us both how “the west” was slow to perceive how a Chinese style of political government could sustain economic recovery and how the “return of China” and the “fifteen other fast-growing non-Western economies […] is dramatically reconfiguring the global power structure” (Luce 21). In an age of fake news and alternative facts, misrepresentations are only set to continue and they are not unique to op-ed writers and political commentators. What we might describe as a new era of misrepresentation is only likely to grow more pronounced as the blame-game around the coronavirus unfolds. The different arguments on behalf of “Western” or Sinocentric worldviews must be balanced and our efforts to challenge still influential western theories that neglected the Asian perspective and bolstered reinvigorated western exceptionalism and entrenchment must continue. However, we must also be open to the very real possibility that academic factions will also be eager to present politicised versions of both cultural perspectives as universities continue to be integrated into government funding and national frameworks. This tendency in the Greater China context perhaps goes beyond what Leo Lee Ou-fan envisaged when he urged scholars in the humanities in Asia in 2010 to contemplate how to make a new beginning in the humanities to challenge western philosophical thought from an Asian humanistic point of view. Lee argues that this is a task made more urgent by the ubiquitous effects of globalization.1 For Lee, “the task of re-examining and redefining Western philosophical theory should be undertaken by Asian humanistic scholars,” however, ←8 | 9→the term “Asian humanistic scholar,” he argues, should not be taken to mean “scholars of Asian descent, but rather all humanistic scholars interested in Asia.”

It can often appear as if there are only two sides to this encroaching, polarised academic debate that is only likely to continue after this period of lockdown. Liberal commentators can misrepresent the “west” and its values in pushing back against the rise of populism and conservative ideologues as much as scholars who are more intent on advocating a Sinophone or Asian humanistic approach to culture and knowledge. This is particularly true now that there is a general mood that “the West’s centuries-long domination of world affairs is now coming to a close” (Rachman ix). New state-sanctioned western university movements that seek to reboot this interest in western values must even come up with “manifesto[s]” for the teaching of “western civilization.”