Community Action in a Contested Society

The Story of Northern Ireland

Much has been written about the history of the Troubles in Northern Ireland, but one story remains untold: that of the grassroots activism that maintained local communities in the face of violence. This book speaks through the voices of the activists themselves, drawn from both sides of a divided society. It records their memories of community organising and work on social issues, as well as their insights into surviving the politics of the period and contributing to peacebuilding. Providing a vivid account of how politics touched people’s lives, the book celebrates the energy, imagination and determination of community activism. It also examines the challenges faced by policymakers struggling to make sense of conflicting community narratives and official government positions.
There are vital lessons here for organisers, activists and policymakers working in any contested society, particularly those operating at the interface between social need and peacebuilding. Informed by an oral history approach, this book argues that conflict transformation is possible and that community activism has a major contribution to make in creating alternatives to violence.

Much has been written about Northern Ireland but the contribution of community action over the period of the Troubles is largely unrecorded. This book attempts to fill at least some of the gap by charting aspects of the kaleidoscope of that story. It primarily draws on interviews conducted with ninety-eight local activists and community development workers, in addition to eighteen statutory officials, scanning experience over the period 1969–2016. Interviewees from the community catchment are drawn in roughly equal numbers from Catholic/Nationalist/Republican (CNR) and Protestant/Unionist/Loyalist (PUL) identities. The officials are predominantly from the latter. Where quotes are used from those interviewed, they are not attributed to named individuals unless the person in question is a known public figure. This is not a concern over misrepresentation of the views expressed, but in recognition of authorial responsibility for the selection of quotes used.

The book is by necessity impressionistic given the discipline of publication word limit. Chapter 1 provides a light touch introduction to the political context of the period for readers engaging with it for the first time. As such, it can only reference and frame events and developments that warrant considerably greater study and explanation. Subsequent chapters are arranged in approximate chronological order to facilitate insight into the challenges and opportunities offered for community action and the inventiveness shown by activists that balanced on the interface between political and social developments. The final chapter, Chapter 12, highlights learning that is considered relevant for workers looking to create space in violently divided societies.

While focused on the story of Northern Ireland, there are aspects that are applicable to any contested society – the problem of closing space for either complexity or critique; the power of perception and rumour; conflicting community and/or official narratives; and the prevalence of physical threat. Community action has to develop thinking and skills to ← ix | x → remain feasible and relevant. Similarly, while every conflict is unique, the clustering of perceived grievances and seeking a sense of security with one’s ‘own’ will be generally recognisable. There is reference throughout this book to ‘single identity’ communities, which are either overwhelmingly Catholic/Nationalist/Republican or Protestant/Unionist/Loyalist; this is a short-hand signifier of a relationship to the State based on national and cultural identity, kinship and political affiliation, rather than primarily a theological identification. The bracketing of Catholic/Nationalism/Republicanism and Protestant/Unionism/Loyalism also acknowledges the heterogeneous views within these two dominant categories. However given the clumsiness of the designation, a shortened version of the description of these single-identity communities will be used throughout the remainder of the text.

The motivation for this work was observation over many years of the commitment, dedication and courage shown by many individuals that contributed to community resilience in abnormal circumstances. Some of those interviewed are no longer with us. Ann McGeeney, William (Plumb) Smith, Jeremy Harbison, David Stevens, Tom Lovett, Theresa Kelly, Fr. Matt Wallace, Hughie Smyth and Joe Wright are all remembered. My thanks to them and to all the other interviewees who generously contributed to a study that became a PhD thesis and latterly this book. Thanks also to Mary Black, Chairperson of the Community Foundation for Northern Ireland, who encouraged the venture, and to the patience of my family who lived it. The publication of this book has been supported by the generosity of the Joseph Rowntree Charitable Trust that made its own very important contribution to peacebuilding in Northern Ireland over many years. I would also like to acknowledge Elaine Farrell for her kind permission for use of the front cover photograph. Finally, thanks to John Morison, my Queens University Belfast supervisor, who at times despaired of the PhD but always said he would buy the book – John, here is the book. 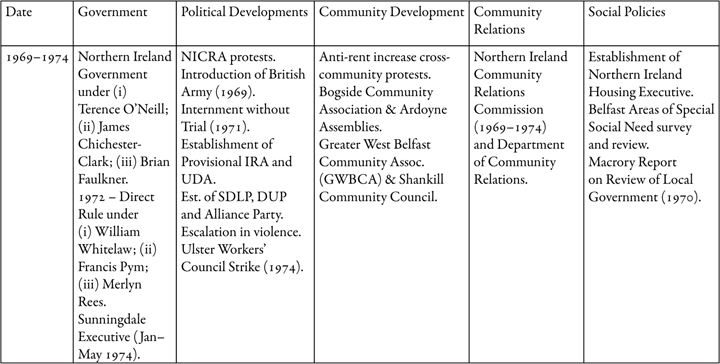 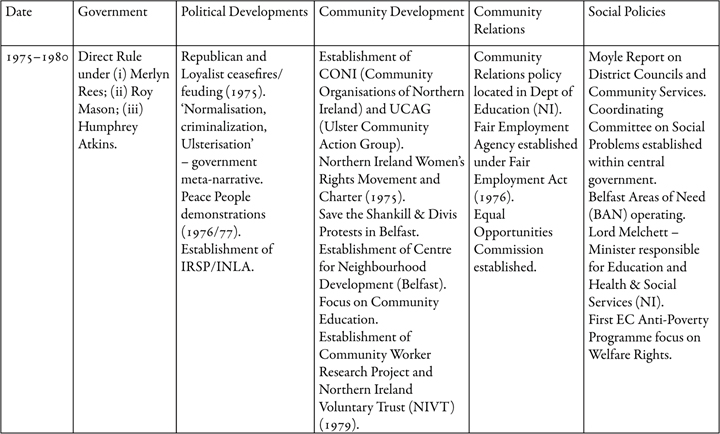 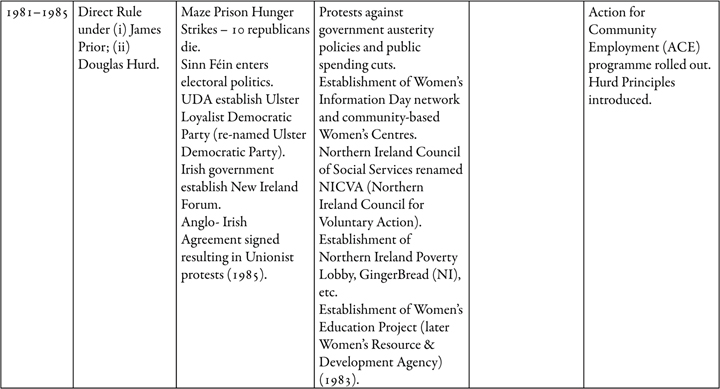 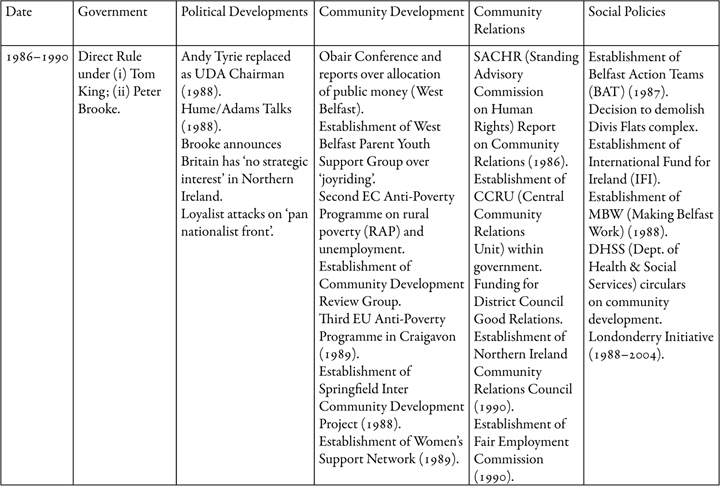 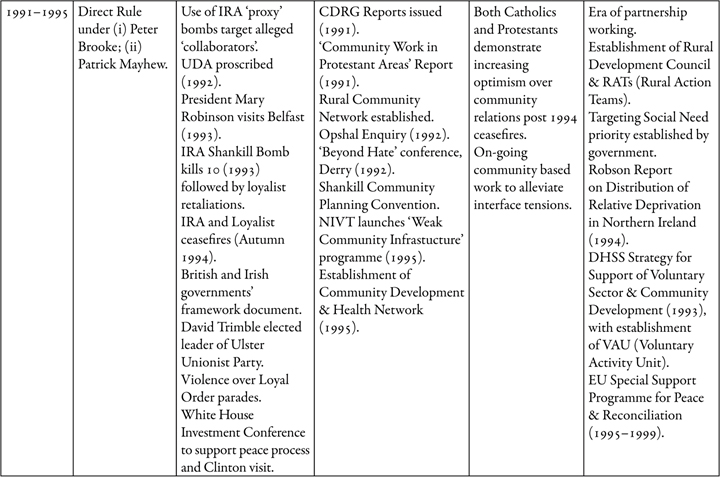 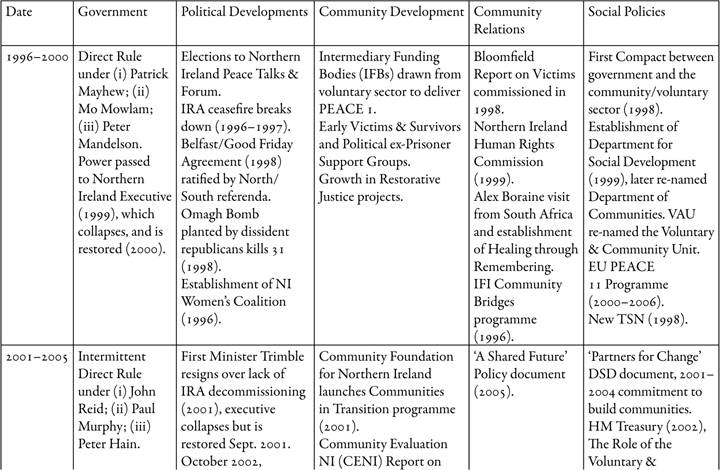 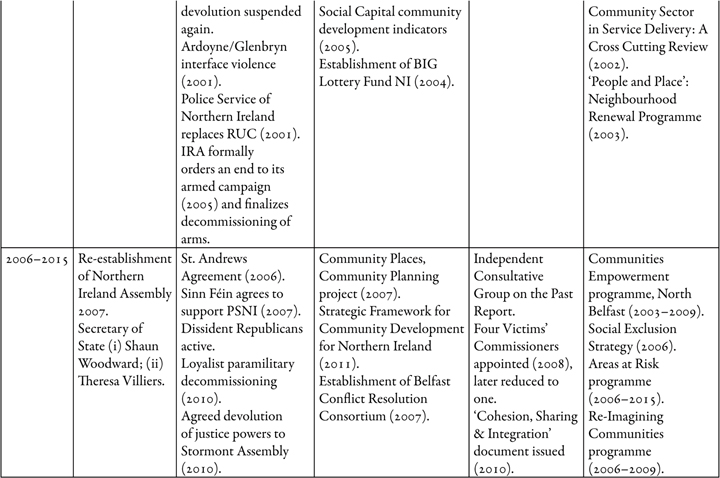 Four decades is a long time in anybody’s reckoning. Where society is riven by violent conflict it can seem an eternity. There are periods of desperation; even more times of frustration; but despite all, communities are resilient. In Northern Ireland survival was underpinned by a blended tonic of sardonic humour, self-justificatory community narratives and sheer bloody-mindedness. Over 3,500 people lost their lives; some 50,000 were bereaved or injured and an estimated 35,000 were imprisoned and/or interned for politically motivated activities. Many thousands were intimidated out of their homes and fled to ‘safe’ areas, invariably single-identity in nature (overwhelmingly either Catholic/Nationalist/Republican or Protestant/Unionist/Loyalist). The human cost in a society of 1.6 million etched deep scars. The abnormal became the norm, particularly in the most disadvantaged communities. Yet it was these communities that developed an incredibly vibrant civil society characterised by social activism and community action with a twist of politics.

Setting ‘the Troubles’ in context

Northern Ireland was established as a self-governing region in 1921 after the partition of Ireland. The southern twenty-six counties negotiated independence from Britain after a hard fought War of Independence, leaving the unionist dominated six north-eastern counties part of the United Kingdom (UK). Division was in-built from the start, given the Protestant majority of some 65 per cent, and a Catholic minority of 35 per cent. The latter were seen as potentially disloyal and subversive in a chronically insecure ← 1 | 2 → northern state that struggled to even agree on a name. Officially termed Northern Ireland, it was also known as Ulster, the North, or even ‘the occupied six counties’, depending on political perspective. While overall sovereignty remained with the Westminster Parliament in London, to all intents and purposes the Stormont Parliament in Belfast ruled through single party Ulster Unionist government over the period 1921–1972. Its core remit was to protect the union with Britain by resisting the perceived threat of a united Ireland.

Avila Kilmurray is Visiting Professor in the Transitional Justice Institute at Ulster University and works as a consultant with the Social Change Initiative (Northern Ireland). She has worked extensively in the community and voluntary sectors and was Director of the Community Foundation for Northern Ireland for twenty years. She was also a founder member of the Northern Ireland Women’s Coalition and a member of its negotiating team during the 1996–1998 peace talks.