With the development of the industry, both social lives and economies have been significantly affected. Together with the Industry 4.0 revolution, significant changes have occurred in both the social life and the production process. As a result, different sectors are affected by this change. With this book, successful researches have been carried out by expert academics in a wide range of fields from finance to marketing and tourism to foreign trade, etc.

1.1   The Conceptual Framework of the Industry 4.0 Revolution

Abstract: Humanity has undergone important historical phases to see the level of productivity that the industry has reached today. In the first industrial revolutions, steam-powered mechanical production facilities were developed. In the second, mass production was realized as a result of the use of electricity in mechanical production facilities. The third stage, automation in production was realized due to the development in electronics and information technology. The developments in information and communication technologies as a result of these three industrial revolutions brought forth Industry 4.0, a new revolution in production in the early 21st century. Industry 4.0 refers to the system in which new production technologies, automation systems and technologies of this system are integrated by exchanging data with each other. In this study, after a brief account of Industry 4.0, the main components of Industry 4.0 are discussed. Then, the design principles that guide the Industry 4.0 applications are explained. Finally, information about the advantages and potential challenges of Industry 4.0 are highlighted. Although Industry 4.0 is very popular, there has not been enough systematic and comprehensive research on the subject. Therefore, the issue has not yet been fully understood by vast majority. This study is aimed to contribute to the further understanding of the subject for those interested.

1 Overview of the Development of Industry

Every industrial revolution that has been experienced so far has brought about innovations and transformations with it. These innovations have caused significant changes and transformations in the economic, social and cultural life of societies. Each new revolution changes the way of production, which consequently changes the way of life and affects the welfare of countries. The transformation, which first began in England in the 1760s, spread to other European countries and the United States. The economy, which was formerly based on agriculture and handicrafts, was transformed into an economy dominated by industry and machinery manufacturing with the industrial revolution. Accordingly, the rural ←13 | 14→community dealing with agriculture has turned into an urban society oriented towards industry. 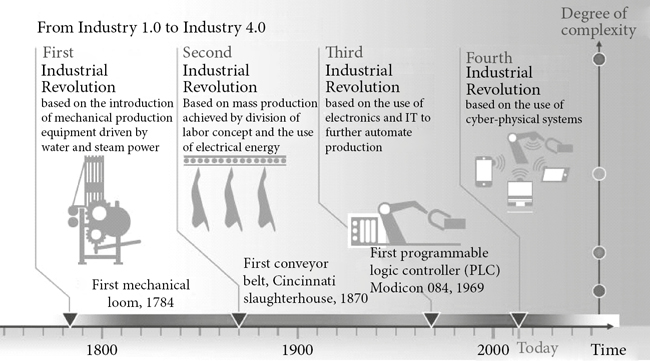 The first industrial revolution refers to the process by which the economic structure based on agriculture and handicrafts was transformed into dominant industry and machinery manufacturing. This process, which first started in Britain in the 1750s, then spread to other parts of the world (Khan, 2019). The process of spreading out of the British was very slow as the British banned machinery exports, skilled workers and production techniques in the beginning (Britannica, 2019). Although the steam engine was discovered in England earlier, it was slow and inefficient. However, the industrial revolution gained more functionality with James Watt developing the more powerful and efficient steam engine in 1776, and discovering that it could be used in many different industries. Thus, the process to explore the steam, trains and ferries was started. The ←14 | 15→steam engine increased the power of the machines and allowed production to shift from small to large factories. In addition to steam, the use of coal as a source of energy led to the proliferation of mechanization in Britain. One of the sectors most affected by these changes has been the textile industry, which was very important for the British economy (Crafts & Wolf, 2013: 8).

On the other hand, the use of new energy sources such as coal and steam, which were used to power the new machines designed to increase production, reduced the human labor and led to the transition to an industrial society (Study, 2019). People moved from rural areas to cities where factories were located. The labor intensive mode of production was transformed into capital intensive production, and the working class emerged. Increased productivity with the use of machinery in production led to an increase in the level of wealth and population.

The use of electricity in production in the factories and the establishment of the necessary conveyor belt system for mass production in automotive production gave a significant impetus to the development of the industry. In this period, developments such as the telephone, radio and fax shaped communications and telecommunication. In this way, the increase in production and development of the railway transportation, thanks to steel, also developed trade between cities and countries. The increased need for raw materials led to the exploitation of both labor and natural habitats (Schweikart 2010: 189). The second industrial revolution also brought about some changes in social life. The fact that the cities become production centers caused intensive migration from rural areas. On the other hand, by increasing the level of welfare of an increasingly larger segment of society, industrialization also improved healthcare.

Since this period is marked by the great developments in computer, information and communication technology triggered by the transition from analog ←15 | 16→and mechanical systems to digital ones, it is also known as “Digital Revolution”. One of the first triggers of the Third Industrial Revolution was the development of inter-computer network communication by the US Department of Defense in 1969 under the name of ARPANET (Advanced Research Project Agency Network). This development, which was initially aimed at defense, would create radical changes in trade with the development of the Internet, which, with time, would trigger the information age. On the other hand, other important factors involved in the development of the third industrial revolution were the technological developments in the production, distribution and energy factors (Roberts, 2015: 2). The third industrial revolution, which has changed the ways of working, production and entertainment, is also known as the period of transition from industrial society to information society.

In this period, the development of technologies such as computer, microelectronics, fiber optic, laser, telecommunication, and nuclear, biotreatment, and biogenetics sciences affected the direction and shape of the production (Siemens, 2019: 6). Through the use of computers and new machines, we switched to a new production style called automation. In addition to this, by the use of computers with the increased processing power and later, smart machines and robots in production decreased the need for manpower. Developments in information technology and transportation led to radical changes in trade. Companies shifted production to countries that were more cost-effective. In this century, a new process called “globalization” started (Deganutti, 2019). As a result of these developments in information technology, a more automatic, robotic and technology-dependent working style (Roberts, 2015: 2) laid the foundations for the development of technologies such as smart production, cyber-physical systems (CPS) and the internet of things and services, all of which are important components of the Industry 4.0 that we currently are in.

Although Western Europe is an industrially developed region, the share of industry in the economy has been decreasing recently in the region. On the other hand, the share of industry in developing economies, especially in China, India and Brazil, is increasing (Qin et al., 2016). Faced with these developments, the concept of Industry 4.0 was born as a result of the idea of strengthening the competitiveness of the manufacturing sector in Germany by connecting the country’s industrial production with information and communication technologies (Kagermann et al., 2013: 25).

The term “Industry 4.0” began to be known by everyone in 2011, at the Hanover Trade Fair, in order to support the idea of enhancing the competitiveness of the German manufacturing industry by an initiative called “Industry 4.0” consisting of business, politics and academy representatives (Hermann et al., 2015: 5). This new idea, which took the center of the Federal Government strategy for the development of the German economy, began to become popular from then on and became the subject of most academic research (Kagermann et al., 2013: 77). The main purpose of this idea was to benefit from the potentials of new technologies and the concepts listed below (Rojko, 2017: 80):

• The availability and usage of internet and Internet of Things (IoT)

• Integration of technical processes and business processes into establishments

• Virtualization and digital mapping of the real world

Industry 4.0 is a broad term and various authors evaluate it in different contexts. Industry 4.0 can be expressed as a “common term for technologies and concepts for value chain formation” (Hermann et al., 2016). Industry 4.0 is a concept ←17 | 18→consisting a manufacturing network with a dynamic structure where machines and products can communicate with each other without any human intervention (Ivanov et al., 2016: 386). Industry 4.0 deals with CPS, future-oriented technologies and internet and the principles of smart systems that have advanced human-machine interaction paradigms.

The fourth industrial revolution is different from the previous ones and is concerned with all areas of life. Industry 4.0 is assumed to have a wide range of applications, including energy production and distribution, health, manufacturing, public sector, transportation and mining (Rojko, 2017: 78). In this context, Industry 4.0 commercializes the exchange of information between people and people and between people and objects as well as between objects and objects. It is assumed that Industry 4.0 has the potential to affect all industries by changing the design, production, delivery and payment method of the goods (Hofmann and Rüsch, 2017: 27).

Fatih Ayhan is working as an academician in the Economics Department at Bandirma Onyedi Eylul University, Turkey. He has many different studies in several areas. His experience is focused on especially monetary policy, labour market, financial markets and international economics.