Evoluation of Money, Banking and Financial Crisis: History, Theory and Policy
focuses primarily on the historical development of money, the change of the banking sector and global financial crises. Money, which started as an exchange tool and has become digital; historical change in the banking system and its relationship with policymakers; global financial crises, balloons, and speculations and policies for the emergence and prevention of them are thoroughly examined in the book.

Dr., Central Bank of the Republic of Turkey

Asst. Economist, Central Bank of the Republic of Turkey

Asst. Economist, Central Bank of the Republic of Turkey

Central Bank of the Republic of Turkey

1 Exchange Rate Regimes and the
Financial Trilemma: An Evaluation for the
Post-Bretton Woods

The unprecedented financial turmoil that started with the collapse of the giant Lehman Brothers in September 2008 can be regarded as a turning point in economics thinking. As the capitalist system was brought under question, the basic assumptions of fundamental economic theory, and policy making also took its toll. New questions on how the real economy and financial markets work and their interconnectedness brought in new considerations into light. The global financial crisis (GFC) has made evident the existence of global cycles.

After the crisis, a large literature evolved that analyzes the determinants of global cycles, synchronization in countries, and asset price co-movements (For a survey see Claessens and Kose 2017). One important takeout is that global financial linkages and especially global spillovers from the USA have become ←13 | 14→a dominating power in the global economy. There is a vast literature that investigates the cause and effects of these spillovers. The main driver is the capital mobility and financial connectedness. Rey (2015) points out that the “global financial cycle” created by the monetary policy in the center country, that is, the USA, affects the capital flows and credit growth in the international financial system through leverage of global banks (Cerutti, Stijn & Ratnovski, 2017).

One related question is how countries can insulate themselves from the negative effects of the global spillovers. This has brought into question how countries under different arrangements are affected by global spillovers and whether exchange rates provide effective insulating mechanisms. In light of the recent evidence, we revisit this important concept in international finance, which is the exchange rate regime choice. Our main focus is to provide a historic review on this discussion and how the question has translated after the GFC.

After the collapse of the Bretton Woods system, from 1973 till 1994, the world entered a period of increased globalization and financial liberalization. This period is known as the “modern era of financial globalization”. There has been a steady increase in financial integration with the capital account liberalizations in advanced economies in the 1980s and in emerging markets in the 1990s.

The sum of foreign assets and liabilities over GDP, plotted in Fig. 1.1, which is a measure of international financial integration, has increased by a factor of 7, from 45 % in 1970 to over 300 % in 2004 (Lane & Milesi-Ferretti, 2007). During the 1970s and 1980s, the increase was fairly gradual, but since the mid-1990s there has been an acceleration for the emerging markets/developing countries. 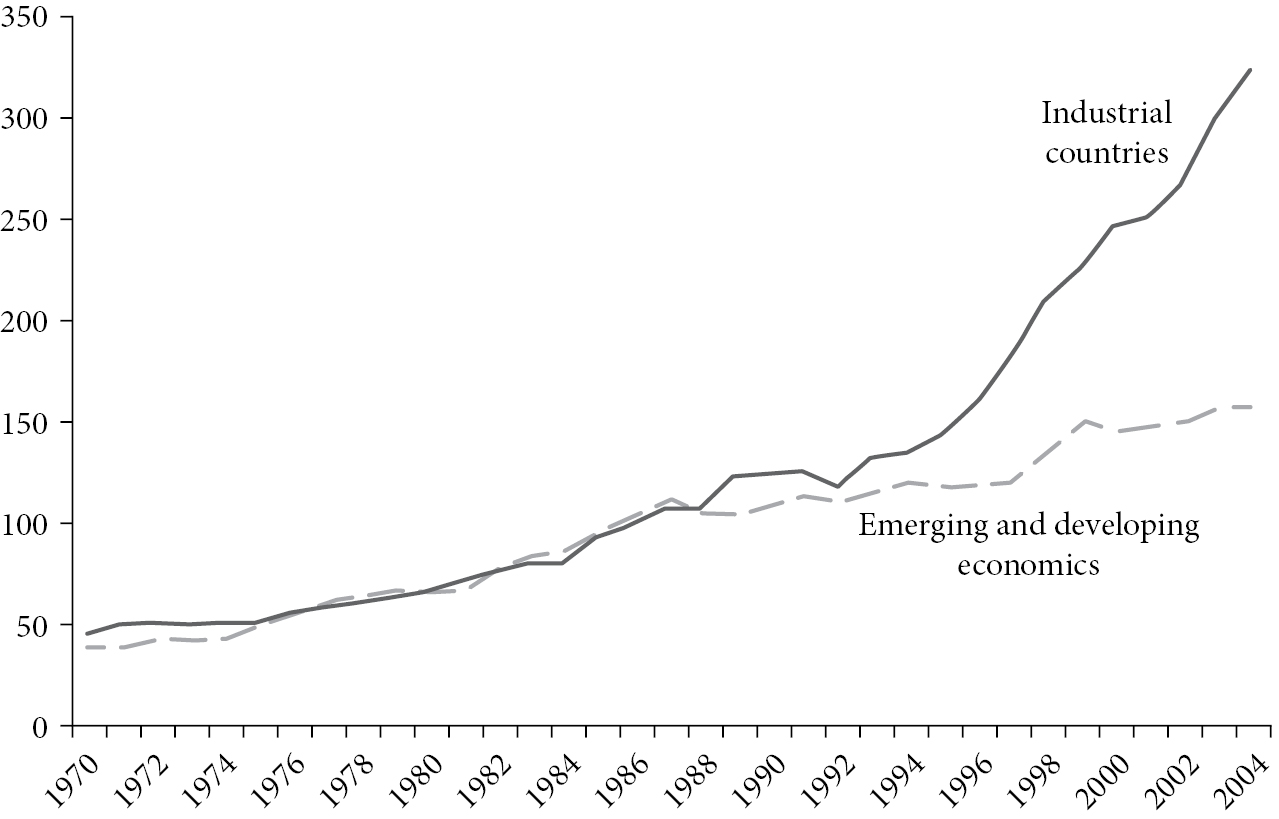 In a recent study, Bekaert and Mehl (2019) using a sample of 17 economies accounting for two-thirds of world GDP over the sample period from 1885 to 2014 show that the pattern follows a “swoosh” shape (see Fig. 1.2).1 There is high financial market integration in the pre-1913 period, still higher in the post-1990, and low in the interwar period. Their finding is in line with Rangvid et al. (2016) who look at equity market integration for the period 1875–2012 and find much higher financial integration in the later part of their sample relative to earlier. 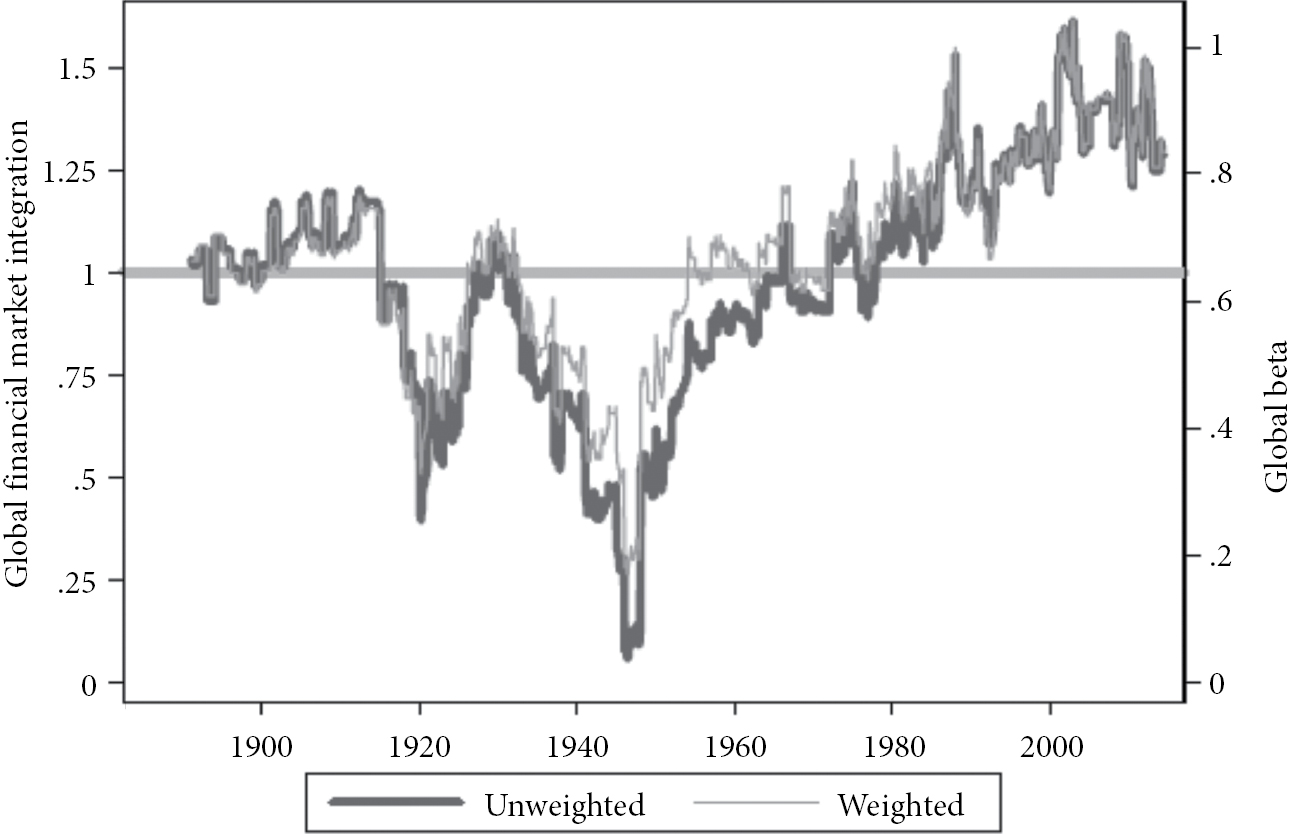 Most emerging economies had maintained open capital accounts by the end of 1990s. The liberalization period in the emerging economies (the middle- and low-income economies) was one with frequent crises and output losses. In their struggle to fight inflation, these countries adopted fixed exchange rate regimes as a tool to import credibility in the monetary policy (Edwards, 2001). However, most of these attempted ended with a demise.2 Starting with the tequila crisis 1994 in Mexico, many emerging economies experienced balance of payments crises accompanied by painful devaluations and output losses.3 As both empirical and theoretical studies attempted to investigate the underlying causes and consequences of these episodes, a vast literature emerged on different types of currency crises models. (see Krugman, 1979; Flood & Garber, 1984; Obstfeld, 1986; Jeanne, 1997 for crisis literature and Kaminsky, Lizondo, Reinhart, 1998; Kaminsky, 2006 among others for crisis determinants).

After the experience with the fragility of fixed exchange rate regimes in the 1990s, more emerging countries chose to adopt floating regimes that insulated them from the risks of speculative attacks (e.g., Indonesia, South Korea, and South Africa). The move towards exchange rate flexibility is most evident in developing Asia and Latin America. Emerging Asian economies shared this trend until 2000, at which time exchange rate stability started increasing. Some others kept operating under more rigid arrangements (e.g., Argentina and Malaysia).

In the 2000s pointing out to this divergence, several studies claimed that there has been a move towards the corner regimes of floating or pegged arrangements, known as the “bipolar view” (Eichengreen, 1994; Fischer, 2001; Summers, 2000). The declining share of the intermediate regimes in the de-jure classification supported the bipolar view (see Fig. 1.3). 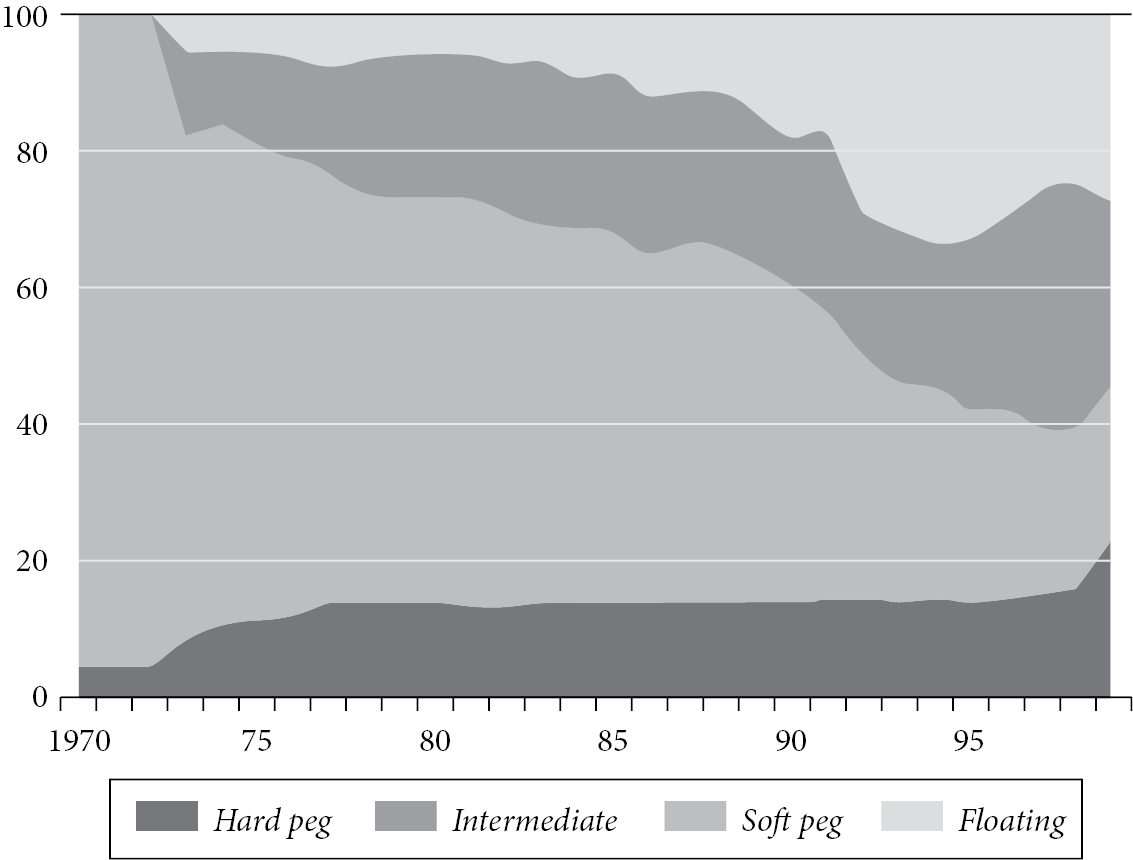 The argument was that for countries well integrated into world capital markets, intermediate regimes (or soft pegs) are crisis-prone and unsustainable, also known as the “the vanishing-middle” (Eichengreen, 1994) or “hollowing-out” ←17 | 18→hypothesis (Fischer, 2001). Obstfeld and Rogoff (1995, p. 74) claim that for countries with an open capital “there is little, if any, feasible middle ground between floating rates and the adoption of a common currency.”

Ghosh, Gulde, and Wolf (2003); Levy-Yeyati and Sturzenegger (2005); Bubula and Otker-Robe (2002); and Fischer (2001) are other examples that pointed out to the declining share of countries with intermediate exchange rate arrangements. However not all studies found support for the bipolar argument (e.g., Bubula & Otker-Robe, 2002). Some studies showed that the shares of the three main regimes was essentially unchanged (Rogoff et al., 2004; Dubas, Lee & Mark, 2005) or rose (Bailliu, Lafrance & Perrault, 2003) since the early 1980s.4

One reason for the mixed finding is related with how the exchange rate regimes were defined and specifically how the regimes are aggregated into categories. For example, Bubula and Otker-Robe (2002) and Fischer (2001) (both ←18 | 19→who used the IMF de facto coding) classified the “managed floating” into the floating corner. Also because of the fear of floating, many countries that claimed to operate under floating regimes actually did not.

Nearly a decade after the famous bipolar argument, we see a continued presence of intermediate regimes such as soft pegs confirming Bubula and Ötker-Robe’s (2002) argument that intermediate regimes are unlikely to disappear in the future. Also some countries flip back and forth between pegs and floats (Klein & Shambaugh, 2008).

In Figure 1.4 panel (a) shows the share of world GDP in each category of the de facto classification constructed by Ilzetzki, Reinhart, and Rogoff (2019). As can be seen, while there has been an upward trend in fixed arrangements after the 1980s, there is no validation of the bipolar hypothesis. In a recent study, Frankel (2019) constructed a continuous measure of de facto exchange rate regime classification for 145 countries in the post-Bretton Woods period from July 1974 to May 2018. The measure ranges between 0 and 1 corresponding to the hard peg and pure floating corners, and in Fig. 1.3 panel (b) shows the arithmetic mean value of the continuous ERR measure for all countries. As can be seen, there is an increasing trend towards flexible regimes, also invalidating the bipolar view. Since 2000, developing countries have converged towards managed exchange rate flexibility. Majority of the advanced economies are operating ←19 | 20→either under a floating regime or are members of the euro zone. Emerging economies have a greater diversity in exchange rate regimes, and the exchange rate regime choice is still a live policy issue.

One of the main supporting arguments for fixed exchange rates is the predictability they provide. Related to that is their trade enhancing function through reduced uncertainty as predicted by the optimum currency area (OCA) theories (McKinnon, 1963). On the negative side, fixed regimes fail to provide the automatic adjustment mechanism to bring the economy back to full employment when hit by a negative shock. Also they can lead to prolonged overvaluations that can hamper the economy, and are susceptible to speculative attacks.

Considering that prices are highly inflexible in the short run, flexible exchange rate regimes provide the advantage by allowing automatic adjustment of the real exchange rate when the economy is hit by an aggregate demand or supply shock (Bailliu, Lafrance, & Perrault, 2003). Also they allow the monetary policy to respond to such shocks and dampen the negative effect on the economy.