To model the real world truthfully and to foresee an unrealized event are very difficult but crucial tasks. Particularly for the decision-making of an economic agent, no matter if it is a person, household, firm or government, these predictions are a useful guidance. At this point, we see the importance of dynamic modeling analyses in economics due to their realistic ability both in micro and macro levels. Within this framework, this book gathers empirical studies that examine the economic issues from a dynamic perspective.

Chapter 1 A Nonlinear Approach for the Determinants of Exchange Rate Volatility: Evidence from Turkey

Abstract: Emerging markets are reflecting highly volatile exchange rates. Turkish economy, apart from being exposed to exchange rate fluctuations, is fragile due to its dependence on imports. The aim of this paper is to analyze the exchange rate fluctuations in Turkish economy under the following steps: (i) to run principal component-guided sparse regression (PC-LASSO) which is a method for large data to shrink predictions toward the most important variable for volatility out of many potential domestic and international macroeconomic indicators, (ii) to estimate a threshold level for the main determinant of the volatility and examine the impact of these macroeconomic indicators using structural threshold regression model. The empirical findings suggest the international reserves of the central bank as the most important variable for volatility and that the threshold regression reflects the nonlinearity of the model.

After the breakdown of Bretton Woods, countries adopted various exchange rate policies depending on their conditions. Exchange rate is a critical indicator for open economy transactions as import and export levels are dependent on their relevant prices in the international markets. Leaving all other links to a side, stable exchange rate is crucial to enhance trade volume which is – from the perspective of neoclassical theories – argued to be beneficial for consumers and producers together with a rise in the variety of goods and services and a trigger for innovation due to the rise in the level of competition. Prices of domestic products in the international market are theoretically one of the determinants of exports of a domestic country and prices of foreign products in a domestic market are one the determinants of imports the country. Hence, determination of the exchange rate is important to specify the trade balance, which is one of the determinants of the GDP growth as it is a component of GDP. When it comes to developing countries, adjustments in the exchange rate are way more critical due to their fragilities. Regarding the export levels, relatively lower value added ←11 | 12→and lack of competitiveness, and regarding the import levels, dependence on foreign products highlights the importance of developing an effective exchange regime. Emerging economies carry the vulnerabilities of developing countries however their growth potential is very high compared to all others. Relatively higher returns attract global capital searching for best options regarding risk-return rates. Thereby, these countries have become the short-term harbors of the global liquidity. During relatively higher risks or lower returns, capital outflows from one harbor and inflows to another one with lower risks and/or higher returns. Capital inflows bring in international currency triggering an appreciation whereas capital outflow lowers international currency triggering a depreciation of the local currency. Being open to short term capital in and outflows, emerging countries are the countries most exposed to exchange rate volatilities.

Even though the main objective of most central banks worldwide is to maintain price stability, there may be dual mandates including achieving a target for unemployment rate, growth rate, exchange rate or these objectives can be implicitly targeted with a flexibility. Many central banks, explicitly or implicitly, intervene to lower currency and/or exchange rate volatilities due to lack of information regarding the determinants of exchange rates. Trade flows, interest rates, speculations, and several other macroeconomic indicators are unknown and comes as a shock that ends up with a deviation from a steady state or a target level. The hyperglobalization starting by 1990s, as defined by Rodrik (2011), has increased capital flows and increased the accumulation of portfolio investments, which can be used for currency wars. Due to the severe impacts of exchange rate volatility on economies under currency crisis, analyzing the determinants of fluctuations and the searching for policies to best intervene the fluctuations (achievement of a long term impact) has gained importance together with globalization. Fratzscher et al. (2019) argues that after global financial crisis (2008–2009), the importance of limiting exchange rate volatilities has increased more.

Early papers disregard the strength of policy intervention for a long-lasting adjustment in the exchange rate (Dominguez and Frankel, 1993; Lewis, 1994; Kaminsky and Lewis, 1996; Dominguez, 1998; Ramchander and Sant, 2002). On the other hand, recent papers concentrate on optimality regarding foreign exchange intervention. For instance, Cavallino (2019) identifies three endogenous target, namely as the consumption wedge, the domestic net foreign assets and foreign reserves, to follow an optimal exchange rate intervention policy. Some studies signify the role of public announcement in the success of interventions (Dominguez, 1998; Fratzscher et al., 2019).

This study aims to identify the most important variable for the exchange rate volatility using a novel technique, principal component-guided sparse regression (PC-LASSO) model, by Tay et al. (2018) and use this as a threshold variable for an asymmetric analysis. Asymmetric modeling is employed as a tool for nonlinear models when the coefficients change depending on the period or on the economic conditions. Most asymmetric models assign the threshold exogenously which is purely decided by the researcher rather than a rule. Structural threshold model of Kourtellos et al. (2016) allows for an endogenous threshold variable that is estimated using 2SLS or GMM methodology. The findings highlight international reserves as the most relevant variable for exchange rate volatility and that during the low reserve periods, trade balance and policy rate (besides reserves) affect exchange rate volatility negatively; whereas during high reserves period, global economic policy uncertainty is positively effective on volatility.

The following section explains the model, data and the methodology. Section 3 presents empirical findings and last section concludes the study.

The determinants of exchange rate volatility are examined for Turkey using key indicators highlighted in the empirical and theoretical literature. The dataset covers the flexible exchange rate regime (de jure) period using monthly data between February 2006 and February 2020. All domestic variables are obtained from Central Bank of Republic of Turkey (CBRT) database. Dependent variable, exchange rate volatility is the standard deviation of daily nominal exchange rate which is measured as Turkish Lira per US Dollar. Domestic determinants are as follows: inflation rate (INF) is CPI annual inflation; domestic interest rate (INT) is the policy rate of the central bank; budget balance (BB) is in domestic currency; trade balance (TB) is in US dollar; financial openness (FO) is measured as the summation of net portfolio investment and net foreign direct investment (assets minus liabilities); industrial production index (IPI) is used for a monthly proxy for total production; foreign reserves (RES) is the foreign assets in US dollar terms. External determinants are as follows: oil price (OIL) is the daily average of closing spot Brent oil prices from US Energy Information Administration (EIA); federal funds rate (FFR) (effective) is from Federal Reserve Bank of Saint Louis (FRED); global economic policy uncertainty index1 (EPU) is retrieved from and the “Economic Policy Uncertainty” webpage2 which is based on PPP-adjusted GDP measured by Davis (2016). The regression for the determination of exchange rate volatility is represented with the following model specification:

the is the standard deviation of the exchange rate as a proxy for volatility,

is a vector of real macroeconomic indicators (BB, TB, IPI) and

is a vector of external shocks (FFR, OIL, EPU).

) into account. After the determination of the threshold variable, Kourtellos et al. (2016) structural regression model is employed to estimate the threshold parameter (

) and the parameters of the coefficients (

is the indicator function for the presentation of the subsamples obtained from structural break via Kourtellos et al. (2016). The methodology also allows for the endogeneity of the slope variables using instrumental variables3. For the determination of the threshold variable, principal component-guided sparse regression (pcLasso4) model of Tay et al. (2018) is employed which is the combination of lasso and principle components (pc) that shrinks the coefficient vector to the leading principal components and hence provides the most important variable within a group of variables.

Historically, Turkey has adopted fixed exchange rate regime until 1980. After that period, several different regimes were adopted such as crawling peg, crawling band, managed floating, real exchange rate targeting until one of the deepest economic downturns of Turkish history in February 2001. Following the crisis, inflation targeting regime with floating exchange rate regime was adopted motivated by the success stories of several other inflation targeters. However, as an emerging economy, Turkey is subjected to capital flows and exchange rate volatilities are very high accordingly. Fig. 1.1 depicts the rise in the volatility of exchange rate around the neighborhood of global financial crisis and after coup attempt. The figures of all variables vis-à-vis exchange rate volatility are available in the Appendix.

Tab. 1.3 presents pcLasso coefficients for full period and subsamples regarding dramatic changes within the period such as global financial crisis that affected Turkish economy in the period December 2008 – September 20096 and coup attempt on June 15th, 2016. Hence, besides the full period, the following subsamples are investigated: pre global financial crisis period (February ←16 | 17→←17 | 18→2006 – December 2008); post global financial crisis period (October 2009 – February 2020); pre coup attempt period (February 2006 – June 2016); post-coup attempt period (July 2016 – February 2020). Out of 10 domestic and external macroeconomic variables, international reserves of the central bank (RES) is observed to be the most important variable for exchange rate volatility and has a negative association. This negative link is observed in the Turkish economic history during the depletion of international reserves – following crises – leading to devaluations (Kasman and Ayhan, 2008). In the similar manner, Parlaktuna (2005) explains that exchange market pressure in Turkey is reduced by adjustments in the foreign reserves. In the post-crisis subperiod, EPU is very close to RES and is positively associated to exchange rate volatility. This finding is in line with the recent empirical literature regarding the positive and significant impact of economic policy uncertainty index on exchange rate volatility for different country groups (Krol, 2014; Abid, 2019; Bartsch, 2019; Chen et al., 2020). 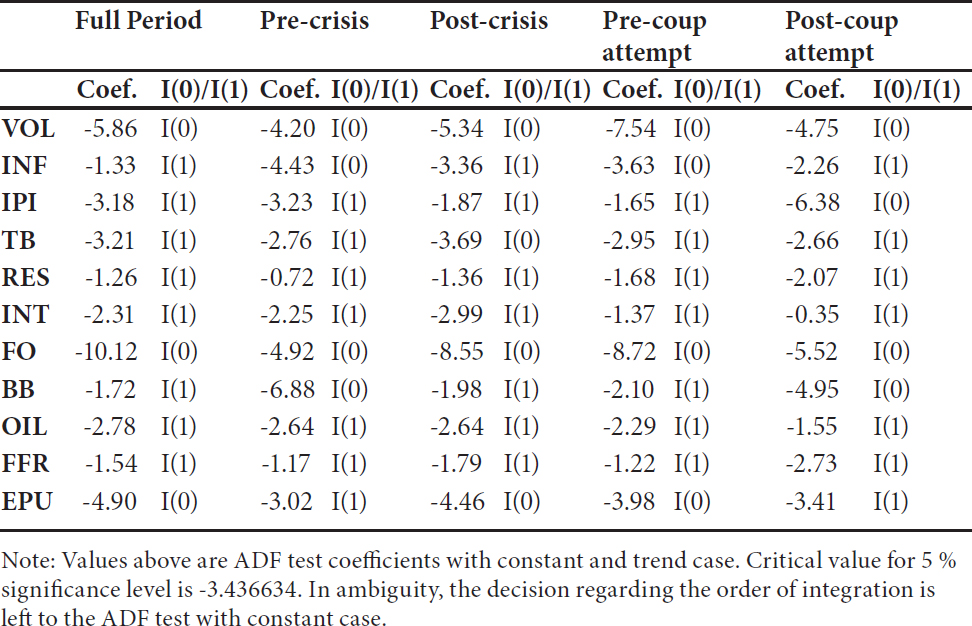 During low regime, that is, when international reserves are lower than an estimated threshold level, trade balance (TB), international reserves (RES) and policy rate (INT) reflect negative and significant impact on exchange rate volatility. These findings reflect that as trade deficit deepens, due to the rise in the necessity of foreign currency, exchange rate volatility rises; and, lower international reserves lead to higher volatility which can be attributed to capital flight due the rise in risk perceptions of the foreign investors; and as the policy rate declines, due to decline in the returns of domestic assets together with arbitrage, exchange volatility increases. During high regime, that is, when international reserves are higher than an estimated threshold level, policy uncertainty and budget balance are observed to have positive and significant impact on volatility, whereas the impact of trade balance is negative, as observed in the low regime period. The positive impact of EPU reflects that the rise in global political uncertainties increases exchange rate volatility due to capital flight in ←18 | 19→the times of rising risks. The positive impact of BB reflects that as budget balance improves, exchange rate volatility rises which can be linked to an indirect transmission mechanism: as budget balance improves, the return from holding domestic government bond declines which renders domestic treasury securities less attractive for the foreign investors and lead to capital outflow.