Offspring of an Icon

This book examines poetic interpretations of the life and works of the American Modernist painter Georgia O’Keeffe. It shows how these poems have interpreted, de-codified and translated O’Keeffe’s subjects, expanding her art and nourishing her legacy. By borrowing the term radicant from art scholar Nicolas Bourriaud, it seeks to capture the essence of O’Keeffe as an artist who approached art in heterogeneous contexts and formats, transplanting and sharing new creative behaviours.
After an introduction to the development of ekphrastic writing, and a summary of the principal aesthetic and critical theories that deal with the intriguing intersections between visual and verbal media, the book provokes reflection on the reasons why O’Keeffe often showed reticence towards the world of words. Subsequent chapters analyse the extent to which poetry prompted by O’Keeffe’s paintings provides not only accurate and eulogistic descriptions of her art but also an encounter between media that expand the interpretation of her art. The book confirms that in visual art as well as in poetry, the shared process of selecting and emphasizing helps artists get at the essence of things and, thus, disentangle the complicated facets of existence.

This book would have not been possible without the support of Professor Giovanna Covi, who accepted to guide my research and followed it with remarkable attention, patience, and faith. I thank Giovanna for sharing her network of scholars and intellectuals and for helping improve this work in innumerable ways. She has shown me that reworking a text is a painful task, but that any such effort is worthwhile. Her thinking and writing about literature has been of great help for my personal and professional development, confirming how important study, research and writing are for me and for my profession.

I thank Professor Andrea Mariani for accepting the joint supervision of my research and for offering throughout a combination of academic rigor, critic example, and unrelenting support. I am particularly grateful to Professor Gregory Dowling, who has encouraged my study of poetry and literature since my early university years in Ca’ Foscari, Venice. I am profoundly thankful to Dr. Shurooq Amin, whose multidisciplinary ekphrastic artwork has provided great inspiration.

This volume has engaged a wide number of poets, artists, academic scholars, critics, and friends whose generous support has been fundamental for its development. With their active participation, they have validated the core of my research, which is represented by the idea of a radicant attitude in the creation of an affiliative and affective system of relationships that this large community of people has confirmed. Without them, this work would have been far less valuable. I believe that I owe each of them an explicit thank you: poet Jessica Jacobs, for her invaluable support; Dr. Richard Swigg, for being the joining link with poet Charles Tomlinson; Prof. Robert B. Shaw, for his detailed suggestions; Prof. Amelia Jones, for her kind and inspiring words; Dr. Tori Duggan, for assisting me with my queries at the Georgia O’Keeffe Museum Research Center Library and Archive; the Beinecke Rare Book & Manuscript Library and Digital Archive, for allowing me to conduct my complicated overseas research in the most comfortable way; ← xiii | xiv → photographers John Loengard and Nadia Baldo, for having put their faith in me; the Società Italiana delle Letterate of Trento.

Georgia O’Keeffe in a World of Poets

My first encounter with Georgia O’Keeffe’s modernist American painting took place in the early 1990s, when the image of a burgundy flower on a book cover boldly titled O’Keeffe (Taschen 1994) captivated my attention from a bookstore window. This flower, Ariseman.3, painted by O’Keeffe in 1930, together with the intriguing double consonants in the surname of an artist still unknown to me, made me walk into the shop and eagerly buy the volume. I skipped Britta Benke’s Introduction and moved straight to the paintings. I was not interested in the painter’s biography, but rather in the instructive power of her artworks on me. For years afterwards, I copied and then imitated her works in an attempt to apprehend the language of color. In the process, I was learning not just her technique, but also about the role O’Keeffe played in society. This circular reflexive relationship led me to understand how well her straightforward language could express the most private, inexplicable, and yet shareable emotions.

I am not alone. O’Keeffe has influenced a wide and growing range of people: reworked versions of her audacious flowers decorate public walls and houses, shifting the focus from the viewer to the maker; her personal story set off a series of biographies and bio-fictions cherished by lovers of her art; critical literature flourished around her works. To me, most examinations of her life and interpretations of her artistic production appeared to be merely appreciations of external aspects of her life and works. What interested me rather were the emotions carried and provoked by her language and actions.

So I started reading O’Keeffe’s correspondence with her friends and fans. My encounter with these papers kindled my research into her personal language as I sought to discover how she translated her own feelings and ideas into words. The poetic tones and sober style of the painter’s writing – O’Keeffe’s letters and her autobiography – made me wonder if the artist had ever enjoyed the verbal medium. O’Keeffe’s statement, “Nothing is less real than realism. Details are confusing. It is only by selection, by elimination, ← xv | xvi → by emphasis, that we get at the real meaning of things” (Georgia O’Keeffe), seemed to be a revealing description of the meaning of poetry.

O’Keeffe had indeed inspired poets as well as painters and the more I looked into it, the more I discovered the substantial corpus of poems written after and around her art. I began a deep exploration of the considerable contemporary Anglophone poetry inspired by the painter’s influential works and life, consequently combining my long-term fascination for ekphrastic writing and art.

I studied and analyzed the motifs that drove more than eighty-eight poets to write more than 500 poems on the artist. By interpreting, de-codifying, and translating the painter’s subjects and interests into words, the poets have made space for new images connected to the ones offered by O’Keeffe, expanding her legacy beyond space and time. The poets have sensed the necessity to voice O’Keeffe’s need to be and to feel plural, to prove she was more than the controversial, plain woman painter the critics described.

While mapping the poems I had collected, I found it useful to refer to Nicolas Bourriaud’s idea of the radicant artist: this corresponded to the role that the painter played in modern and contemporary art. By definition, radicant artists set their roots in motion in order to approach art in its most diverse contexts and formats, transplanting and thus sharing new creative behaviors with an affiliative, affective, heterogeneous, and ever-growing community.

What if poetry could then help me get to the real essence of this artist? What if her influence could be revealed through the poems that were piling up on my desk? Georgia O’Keeffe in Poetry: Offspring of an Icon aims to answer these questions, and by doing this, to expand and nourish the painter’s artistic “radicant” legacy, and simultaneously offer a contemporary examination of ekphrasis and of the intersections between art and poetry.

A Roadmap to the Book

Chapter 1, “Painting Poems on O’Keeffe’s Places,” explores poems related to the places where O’Keeffe lived and from which she drew inspiration, confirming her idea that it was not important where and how she lived, but what she made and left as her artistic legacy.

Chapter 2, “Painting Poems on O’Keeffe’s Living and Still Lifes,” examines poems that refer to O’Keeffe’s paintings on living and still-lifes whose close-up study echoes her idea of realizing the Great American Painting as the celebration of the vastness and miracle of the world in which we live.

Chapter 4, “Theorizing Photographs on the Artist,” presents poems inspired by photographs of O’Keeffe and asserts photography as the tertium quid in the complementary relationship between painting and poetry, thus reaffirming the connecting and radicant power of the arts.

In “O’Keeffe’s Lyrical Offspring,” I conclude by arguing that in visual art as well as in poetry the shared process of selecting and emphasizing helps the artists/authors get at the essence of things, and thus disentangle the complex facets of existence. The analysis of the resistance of meanings in the dialogue between the artist’s artwork and the poet’s composition seems an effective way to define the intangible that artist, poet, and viewer/reader always try to articulate. May Swenson’s poem “O’Keeffe Retrospective” functions as a final lyrical gallery through which the poet provides a last example of the radicant and creative influence exerted by O’Keeffe in her own poetic expression.

The final appendix provides the theoretical framing that supports the book and the engaging method I applied to find and collect any relevant material.

This space is not emptiness.

This space is not, as you would say, Nothing there.

It is a space of fullness, open

to possibility. You would say A foolish space. 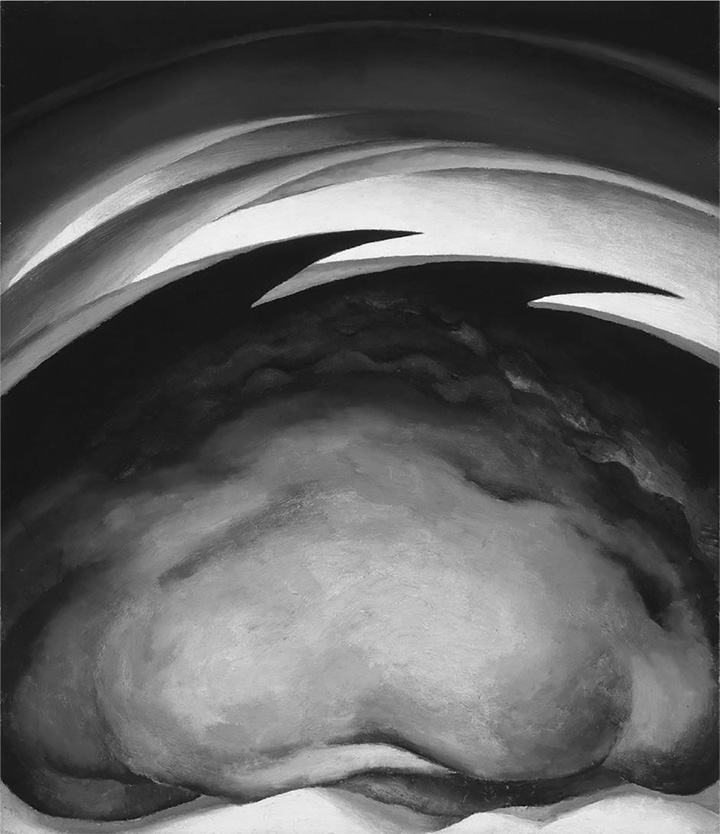 O’Keeffe’s geographical movements inspired a substantial number of poems. This chapter considers them in their chronological order in the attempt to revive the painter’s artistic formative path. The four central sections are titled after the landscapes across which O’Keeffe lived her personal and artistic life: the plains of her childhood and youth from Wisconsin to North Carolina and Texas; the city of New York, where she reached fame and recognition; the area of Lake George, where she resided during the summers in the 1920s and 1930s, in the estate owned by the family of her husband, Alfred Stieglitz; and New Mexico, where she spent most of her life from 1929 until her death in 1986, engaged in the exploration of the meaning of her art.

The driving force of this chapter is provided by O’Keeffe’s own statement in her autobiographic book Georgia O’Keeffe (1976): “Where I was born and where and how I have lived is unimportant. It is what I have done with where I have been that should be of interest.”

Cristiana Pagliarusco holds a PhD from the University of Trento, Italy. She currently teaches English and the humanities in Vicenza. Her research focuses on the intersections between visual and verbal media, highlighting the importance of affiliative and affective relationships among artists and intellectuals in contemporary and global contexts. She has presented her research at international conferences in Europe and Italy and has published widely in literary journals and edited collections. She is currently editing an anthology of poetry inspired by Georgia O’Keeffe and a collection of women’s poems on the same artist.