A Contextual History of Meat in Communist Poland

A monograph on the social history of meat in Poland under the Communist regime (1945–1989). Based on an extensive archival research, which included the records of state institutions and the Communist party, the authors trace back the social and economic aspects of the production and circulation of meat in this period. They analyze, among other things, the problem political interventions into the meat economy in post-war Poland; abuses in meat trade, subjected to severe punishments including death; or the role of meat in the everyday life of Polish families. The dissatisfaction with shortages of meat products emerges as an immanent feature of Polish everyday life until 1989, often resulting in social unrest and becoming a popular theme of rumors and political jokes. 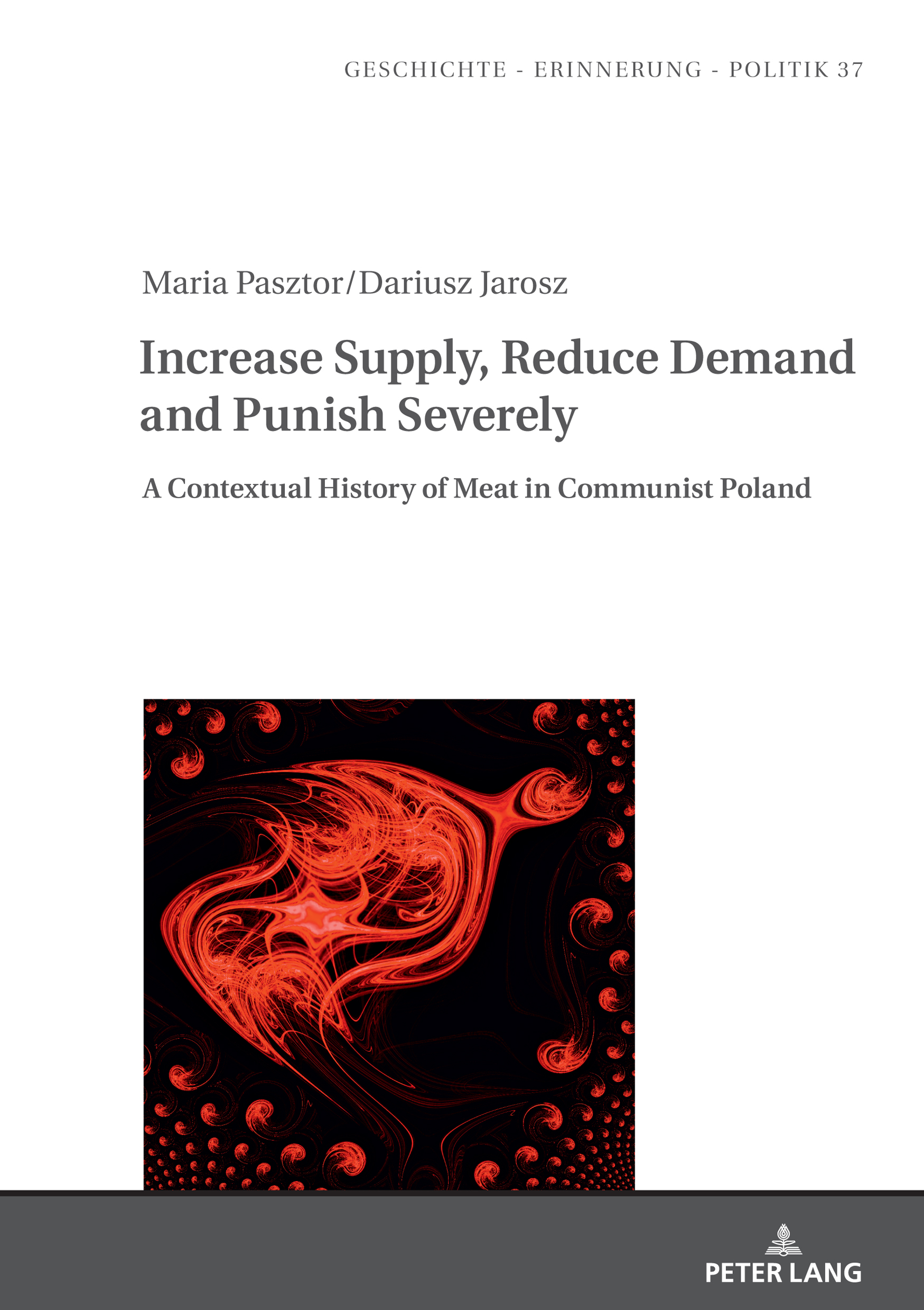 A Contextual History of Meat in Communist Poland

The Publication is funded by Ministry of Science and Higher Education of the
Republic of Poland as a part of the National Programme for the Development of
the Humanities. This publication reflects the views only of the author, and the
Ministry cannot be held responsible for any use which may be made of the information
contained therein.

The Authors
Dariusz Jarosz is Professor of History at the Institute of History of the Polish Academy of Sciences in Warsaw. He specializes in the social history of Poland after 1945.

Maria Pasztor is Professor at the Faculty of Political Science and International Relations at the University of Warsaw. She specializes in Polish relations with Western countries (mainly France and Italy).

This monograph demonstrates that the book of Genesis is a result of highly creative, hypertextual reworking of the book of Deuteronomy. This detailed reworking consists of around 1,000 strictly sequentially organized conceptual, and at times also linguistic correspondences between Genesis and Deuteronomy. The strictly sequential, hypertextual dependence on Deuteronomy explains numerous surprising features of Genesis. The critical analysis of Genesis as a coherently composed hypertextual work disproves hypotheses of the existence in this writing of Priestly and non-Priestly materials or multiple literary layers.

Chapter 1: Meat in a Shortage Economy

Chapter 2: Meat as a Problem for Politicians

3. Punishment: The Wawrzecki Case and More

3.1. Historical Context: Corruption and Economic Fraud in the PRL

3.2. The Mechanism of Fraud in Warsaw’s Meat Economy

3.5. Affairs after the Affair

3.6. Punishment as a Political Act

3.6.1. Political Control of Justice: the Example of Economic Crime

3.6.2. Political Oversight of the Meat Affair

3.6.2.1. Activities of the Warsaw Party Organization

3.6.2.2. Activities of the Central Party Authorities

3.7. The Effects of the Meat Affair

Part II:Meat as a Problem for Ordinary People

Chapter 1: Food (including Meat) in the Everyday Life of Polish Families

1.2. Other Forms of Written Statements

1. The Dispute about Poles’ Behavior toward PRL Reality

Chapter 4: Poles and the Death Penalty “for Meat”

Can meat have its own history? As shown by many publications in Western historiography,1 the answer to that question is no doubt yes. Usually, however, analysis of this matter has come in the context of broader deliberations on the history of everyday life, nutrition (including the cuisine of different nations), food supply, and poverty. Research on commodities located within various social, anthropological, and cultural contexts is grabbing increased attention and arouses ever more interest. However, such interest is still quite weak in Polish historiography; indeed, the idea that meat should be considered a matter of not only postwar Poland’s social or economic history but also its political history, has not resulted in more exhaustive analyses (though some interesting contributions have been made on this subject).2 That having been said, the old joke summarizing the history of the Polish People’s Republic (PRL)3 in two words (“no meat”) indicates that it may be worth considering this phenomenon and analyzing it in various research contexts. In this monograph, we try to approximate an answer to questions tied to Poland’s “meat problems,” to the attitudes that communist authorities and Polish society took toward these problems, and, in ←9 | 10→particular, to meat shortages in the broader context of the issue of food in Poland in 1944–1989.

The starting point for our considerations is the so-called Wawrzecki case. At the turn of 1964 and 1965 in Warsaw, the trial took place of persons accused in the so-called “meat affair.” As a result of this trial, one of the high officials dealing in the distribution of meat in the Polish capital – Stanisław Wawrzecki – was sentenced to death, a sentence that was carried out in March 1965. This fact became a widely discussed matter both within the Polish legal community and in broader public opinion.

For us, the Wawrzecki case serves as a pretext to draw conclusions not only about the significance of the “meat issue” in terms of the regime that ruled Poland after the Second World War and how it functioned but also about social attitudes and behaviors. Many of the topics discussed here touch on the essence of the communist system in Poland and the responses that broad social groups had toward that system’s policies.

This book consists of two parts. The first part (“Control over Meat”) contains our findings regarding the systemic and political determinants of food supply problems, including those related to meat shortages in the years 1944–1989. We deal with various measures taken by state and party leaders aimed at increasing the supply and limiting the consumption of meat. We also analyze how communist authorities presented meat in state propaganda.

A separate current in our considerations is analysis of the Wawrzecki case itself. We argue that the severe punishment that Wawrzecki received was the third path – alongside increasing supply and reducing demand – that Poland’s postwar rulers took to solve food supply problems. We consider Warsaw’s meat affair in broader terms, the most important of which relate to the mechanisms behind corruption and economic fraud, political control of the justice system, and committee supervision over party propaganda and the party apparatus.

The second part of this book (“Meat as a Problem for Ordinary People”) is devoted to various socio-economic issues tied to the PRL’s meat problems. This part includes an analysis of postwar Polish society’s colloquial awareness, attitudes and behaviors in relation to the supply of meat. We focus on, among other things, how meat shortages shaped social discontent, including strikes and workers’ demonstrations. We tried to determine what role the food supply (including meat) played in the everyday lives of Polish families, what the most important social strategies were for mitigating difficulties caused by food shortages. We also tried to place punishment for fraud in the distribution and trade of meat in a sociological and legal context by addressing, among other things, Polish attitudes toward – on the one hand – severe punishments applied ←10 | 11→in so-called “affairs,” and – on the other hand – cases involving minor theft of social property.

Working on this book, we strove to ensure that we discussed all of the above-mentioned aspects of the topic based on sources and studies covering the longest possible chronological periods of time. For this reason, we cover the period from the beginning of People’s Poland (1944/1945) to the year 1989. The beginning of the system transformation and the end of the PRL not only changed the political rules by which the Polish state functioned but also represented a transition to a market economy in which meat ceased be a scarce commodity.

Our research approach thus defined required a broad base of sources made up mainly of documents from the most important Polish party and state institutions. For the full list, see the bibliography.

Dariusz Jarosz is Professor of History at the Institute of History of the Polish Academy of Sciences in Warsaw. He specializes in the social history of Poland after 1945. Maria Pasztor is Professor at the Faculty of Political Science and International Relations at the University of Warsaw. She specializes in Polish relations with Western countries (mainly France and Italy).