What does online community look like in the age of social networking? How do participatory culture platforms reflect both their designers’ intentions and the desires of their users? In this incisive and timely work, Adrienne L. Massanari discusses how culture is created and challenged on Reddit.com, the self-proclaimed «front page of the internet». Reddit enables the sharing of original and reposted content from around the web, and provides a platform for like-minded individuals to commune around topics of interest – everything from the joys of drinking beer in a shower (/r/showerbeer) to celebrating the pleasures of tidy penmanship (/r/penmanshipporn). Massanari’s ethnographic work provides a detailed examination of the contradictions that shape Reddit’s culture and how they reflect its role as an epicenter of geek culture. The book explores the ways in which community on Reddit is formed and solidified through play and humor, and the complex ways in which Redditors come together, which demonstrate a deep capacity for altruism and charitable giving, but can easily lapse into mob action. It also explores the community’s troubling gender and racial politics and how some Redditors are carving out their own space on the site to fight back.

This book has benefited greatly from discussion with my colleagues at the University of Illinois at Chicago, as well as those at other institutions with whom I have had the pleasure of discussing early versions of this work at conferences. Thank you to all of the folks at Peter Lang who have been a pleasure to collaborate with on this process, and especially my editor (and colleague) Steve Jones, who I feel incredibly lucky to work with on a daily basis.

I must express my deepest gratitude to the reddit community, without whom this book would not exist. Thanks especially to all of you willing to answer my interview questions honestly and give me a sense of your experiences with reddit, both the good and the bad.

Also, special thanks to my family and friends, especially my parents, Alice and Jared, who were incredibly supportive throughout the writing process and read early drafts of this book. And, Grandpa Massanari, this one’s for you.

If the internet is made of cats,1 reddit.com (reddit) is its temple. Like most redditors, I cannot recall precisely how I first heard about the site—just as I cannot imagine my online life without it. I am sure I started visiting it semi-regularly in 2008/2009, mostly for the cat pictures. At the time, I was fascinated by LOLcat humor (Shifman, 2014) and was looking for other spaces online where people shared my fascination. I was pleased to find a group of witty, interesting, like-minded individuals (and some jerks, of course). So basically, I came to reddit because of cats. I stayed for the community.

This is a book about a particular online space—reddit—at a particular time (2011–2014). But more than that, this is a book about how members of online, participatory platforms experience these spaces, how their experiences are shaped by the ways in which they are designed, and how these spaces embody certain contradictions that remain underexplored by scholars and journalists. This book is intended for anyone interested in issues around participatory culture, gender, play, and identity and is meant for both new media scholars and those with just an interest in how we live our lives online now.

This book has two goals. First, it is meant as a critique of much of the work that has already been done concerning participatory culture.2 I believe that both journalists and academics have often exaggerated the democratic potential and minimized the actual contradictions that it embodies. Popular press ← 1 | 2 → accounts of participatory culture tend to be overly laudatory, generic, and reductive. And research into participatory culture platforms often references general and high-level patterns but rarely offers specific details about the way these spaces are experienced, contested, and co-created by both participants and site designers. Additionally, investigations into online participatory culture often do not unpack the ways in which these spaces are contested and negotiated by members—and how “affiliation” (Jenkins, Purushotma, Weigel, Clinton, & Robison, 2009) is neither clear-cut nor separate from the everyday lived experiences of its participants. We tend to gloss over tensions that actually characterize interactions in these communities, including the ways in which members negotiate their own participation, and how the community collectively defines its unique identity in opposition to/connection with other spaces (both online and offline). And we tend to neglect how platform politics (Gillespie, 2010) shapes particular spaces in particular ways—and underplays the importance of how individuals and technologies are co-constitutive (Bijker, Hughes, & Pinch, 2012; Latour, 1992, 2005). To that end, this book focuses on one particular online space, reddit, to engage with some of the larger issues related to mediated, participatory culture in the early days of the 21st century.

Second, by documenting how reddit culture exists now, this book also argues for the importance of preserving the nuances of interactions in these spaces as they occur, as global culture is increasingly lived in and enacted through them. However, the lack of meaningful archives makes reconstruction of interactions after the fact nearly impossible, making it critical to document what happens online as it actually happens. It is easy to dismiss “toaster studies” (M. Gray, 2012) approaches to new media—that is, where scholars and journalists examine every new platform or technology superficially—but it is dangerous not to examine these platforms in depth for the richness of the meanings their users make of them. Additionally, I would argue that we should not presume (1) that investigations of the “ephemera” of new media are not critical; or (2) that as scholars (and technology users), we possess the ability to determine what will be “lasting.” Doing so risks losing important aspects of our collective cultural heritage (and yes, even LOLcats are a part of that).

Reddit (the self-proclaimed “front page of the internet”) enables the sharing of original and reposted content from around the web. It was founded in June 2005 by Alexis Ohanian; his college friend Steve Huffman sold it to Condé ← 2 | 3 → Nast publications in 2006, and in 2011 it became an independent subsidiary of Condé Nast’s parent company, Advance Publications (Ohanian, 2013). In 2008, reddit’s code base went open source, becoming a platform that others could use to create their own, entirely separate communities.

Reddit serves as an aggregation platform, which means that most content on the site is linked to rather than directly hosted by reddit. As with other social link/news-sharing sites, registered individuals can submit and upvote or downvote content and comments. Voting is intended to show others what material deserves more (or less) attention from the community. Individuals who submit content and comments are rewarded with karma points, which is a net total of the number of upvotes minus downvotes an item has received. While participants often post content from traditional news organizations, much of reddit’s activity revolves around the sharing of original/remixed content, such as memes (/r/AdviceAnimals, /r/fffffffuuuuuuuuuuuu, /r/lolcats), pictures of animals (/r/aww, /r/babyelephantgifs), solicitations for advice or information (/r/AskReddit, /r/askscience, /r/explainlikeimfive, /r/IAmA, etc.), or niche interests (/r/PenmanshipPorn, /r/hiphopheads, /r/bicycling, /r/MakeupAddiction) in both public and private subreddits.3 Figure 1.1 shows what the default front page (/r/all) might look like for a non-member. 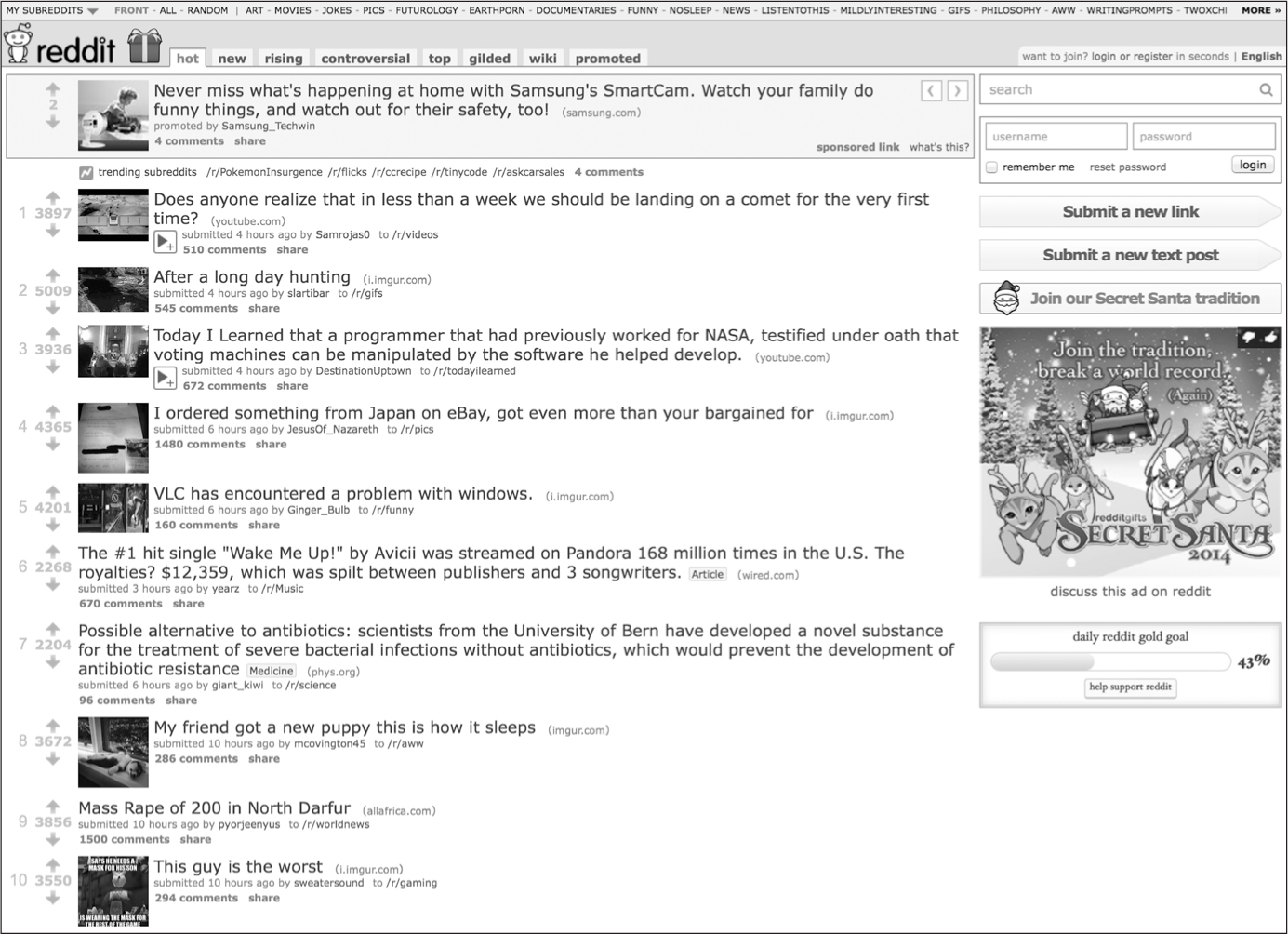 Reddit members (“redditors”) can customize their home page to see only subreddits of interest. Thus, each individual’s experience of the site is a bit different, depending on his or her subscriptions. However, a number of subreddits serve as “defaults”—meaning that new accounts are automatically subscribed to them.4 The intention of the defaults is to showcase to new users a variety of the content that the site offers—the reality is somewhat different (see Chapter 4). 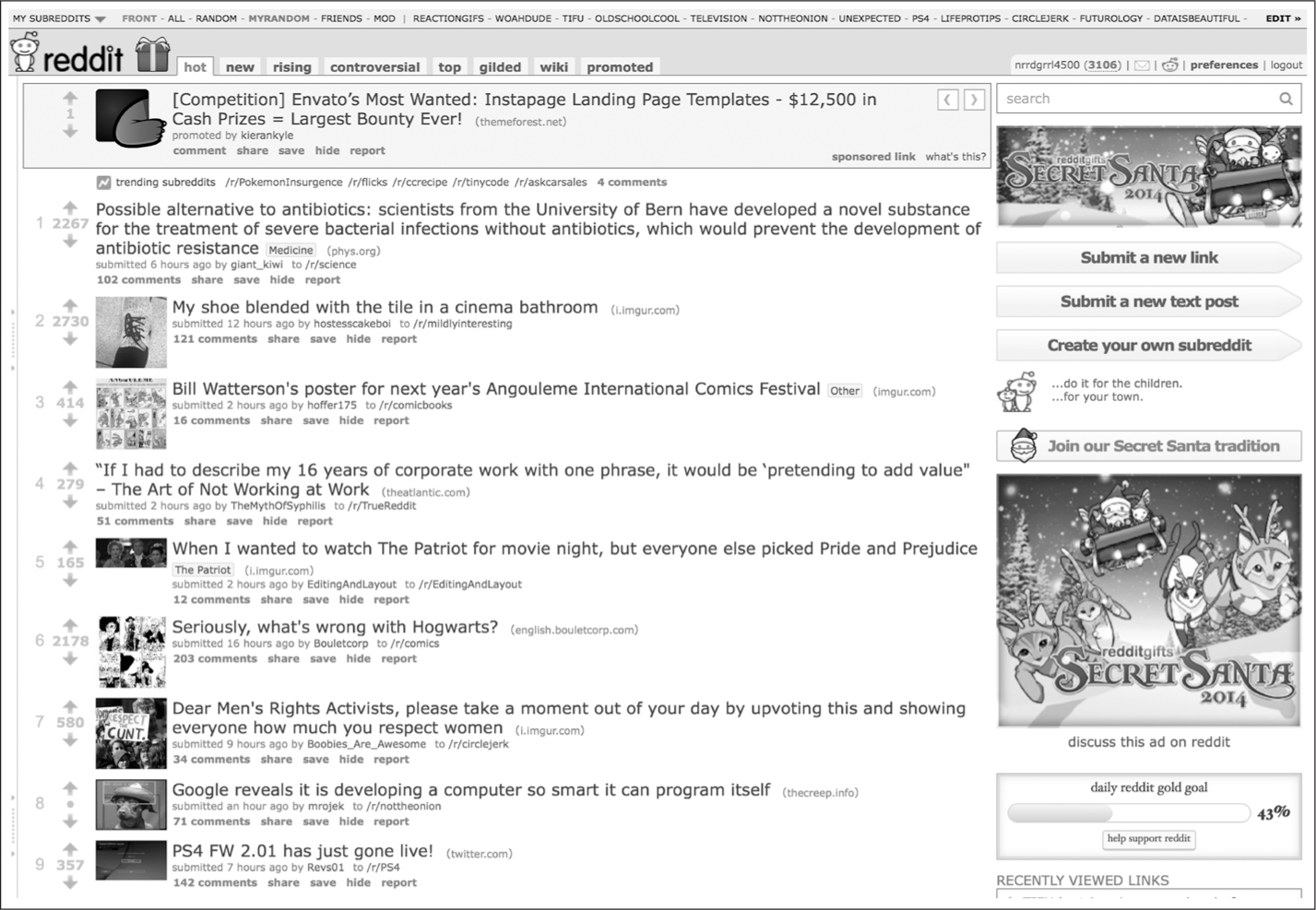 While the links are interesting, most of what makes reddit an engaging place are the discussions around submitted content. Clicking on the smaller comment link instead of the main link takes you to the discussion page for that particular image, video, article, or text posting. (See Figure 1.3.)

Here is where the best (or worst) of reddit is on display. Like links and text postings, comments can be up- or downvoted by redditors, with those that have the most upvotes typically appearing closer to the top of the page. The reddit platform also allows for minor formatting in comment threads—including links, tables, bulleted lists, and blockquotes.5

Reddit also features rudimentary profile pages where you can view links and comments submitted by an individual account as well as see a running ← 4 | 5 → total of that individual’s comment and link karma (useful tools for determining whether he/she is a troll). Profile pages also feature a “trophy case” with badges indicating the length of time the account has existed, any participation in Secret Santa exchanges, Reddit Gold status, and other awards such as “best comment” that the account may have received.6 Redditors can also send private messages (PMs) to others, as well as “friend” them, which basically just highlights their username on link listings and in comment threads.7 (See Figure 1.4.)

Adrienne L. Massanari (PhD, University of Washington) is Assistant Professor in the Department of Communication at the University of Illinois at Chicago. She is co-editor of Digital Ethics (Peter Lang, 2012) and Critical Cyberculture Studies (2006).