The Pan-Orthodox Council of 2016 – A New Era for the Orthodox Church?

The present volume, based on a related conference in Erfurt, offers interdisciplinary insights on the Holy and Great Council of the Orthodox Church or the Pan-Orthodox Council, convened on the island of Crete in June 2016. Although some Orthodox Churches finally declined to participate – the most prominent being the Russian one –, the Council was a most significant development. It brought a considerable number of Orthodox Churches together and discussed crucial issues pertaining to today’s Orthodox world. However, it also vividly revealed existing serious problems of inter-Orthodox communication and collaboration. The contributions in this volume shed light on main issues related to this Council and their multiple repercussions for Pan-Orthodox unity and the future of the Orthodox world. 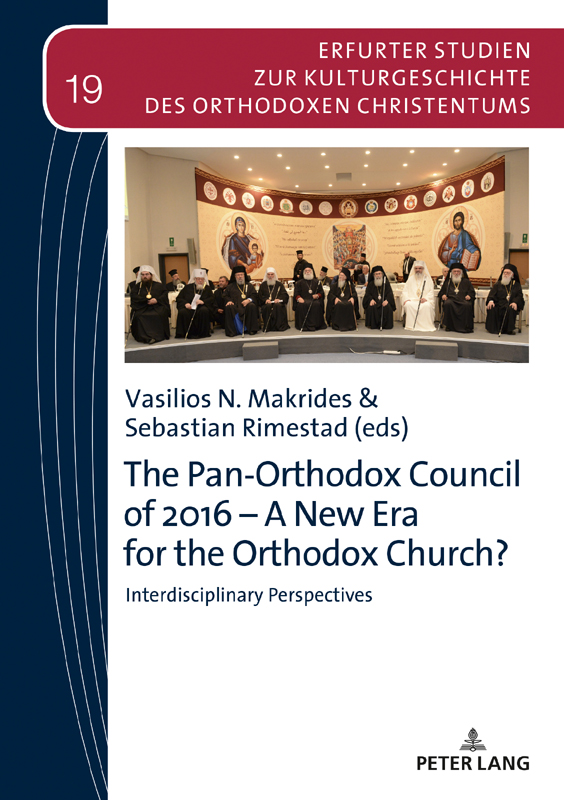 The Pan-Orthodox Council
of 2016 – A New Era for
the Orthodox Church?

A CIP catalog record for this book has been applied for
at the Library of Congress.

Cover image: The Primates of the ten autocephalous Orthodox Churches
participating in the Pan-Orthodox Council of Crete. From the induction
ceremony in the Orthodox Academy of Crete, 24 June 2016.

All parts of this publication are protected by copyright. Any utilization
outside the strict limits of the copyright law, without the permission of the
publisher, is forbidden and liable to prosecution. This applies in particular to
reproductions, translations, microfilming, and storage and processing in
electronic retrieval systems.

Sebastian Rimestad is a Senior Researcher with a focus on Christianity at the Department of Religious Studies, University of Leipzig, Germany.

The present volume, based on a related conference in Erfurt, offers interdisciplinary insights on the Holy and Great Council of the Orthodox Church or the Pan-Orthodox Council, convened on the island of Crete in June 2016. Although some Orthodox Churches finally declined to participate – the most prominent being the Russian one -, the Council was a most significant development. It brought a considerable number of Orthodox Churches together and discussed crucial issues pertaining to today’s Orthodox world. However, it also vividly revealed existing serious problems of inter-Orthodox communication and collaboration. The contributions in this volume shed light on main issues related to this Council and their multiple repercussions for Pan-Orthodox unity and the future of the Orthodox world.

Reflecting on the Pan-Orthodox Council of 2016 – An Introduction

THE COUNCIL AND ITS PARTICIPANTS

The Idea of a Council (Σύνοδος, Собор) in Orthodox Tradition and Ecclesiology

Ecclesiastical Geopolitics of Modern Orthodoxy: An Overview with a Special Focus on the Activities of the Patriarchates of Constantinople and Moscow throughout the 19th and 20th Centuries

The Eastern Orthodox Church before and after the Council of Crete 2016: Actors, Procedures, and Prospects of Consolidation

The Council and “Alternative Orthodoxy”: Who Was not Invited to the Pan-Orthodox Council?

THE ORTHODOX CHURCH AND THE MODERN WORLD

The Orthodox Vision of the Modern World: Context, History, and Meaning of the Synodal Document on Church Mission

Eastern Orthodoxy and Diasporic Communities: The Challenges of Nationalism

Orthodox Diaspora(s) between Theology and Geopolitics: Is Jurisdictional Pluralism Really a Problem?

THE COUNCIL AND WORLD CHRISTIANITY

Parallel Agendas of Vatican II and Crete I? A Close Look at “Relations of the Orthodox Church with the Rest of the Christian World”

Ecumenical Reflections on the Pan-Orthodox Council

Reflecting on the Pan-Orthodox Council of 2016 – An Introduction

Contextualising and Assessing the Pan-Orthodox Council

On 19 June 2016, the Sunday of Pentecost according to the Eastern Orthodox Church, Patriarch Bartholomew of Constantinople presided a solemn Liturgy in Heraklion, on the island of Crete in Greece, in which he was joined by nine further Primates of other autocephalous Orthodox Churches. High-ranking delegations from ten out of the fourteen universally recognised autocephalous churches had gathered at the Orthodox Academy of Crete for the long-awaited Holy and Great Council of the Orthodox Church, commonly referred to as the Pan-Orthodox Council.1 This Council had been awaited since more than a century, and the concrete preparations had lasted more than five decades. Ever since the first Pan-Orthodox Conference on the island of Rhodos in 1961, the Orthodox Church had longed for such a gathering, which would, ideally, resolve many long-standing problematic issues within the Eastern Orthodox Church family.

The Council lasted for a little more than a week (17-26 June 2016) and had been carefully staged, with daily press briefings, official social media channels, and concomitant rhetoric. In the end, it adopted six conciliar documents, plus a “Message”, and an “Encyclical”. The documents were mostly based on previous drafts and versions that had already been discussed for several decades, while the consultations at the Council itself could only make very minor adjustments to them. In general terms, these consultations took place in a very collegial and uncompetitive atmosphere, where the word of every delegation seemed to count equally. The ten delegations left Crete at the end of June with the feeling of having accomplished a great feat for the future of the Orthodox Church.

At the same time, there had been frictions and problems. For one, the four churches that did not send delegations to Crete (the Patriarchate of Antioch, as well as the Churches of Russia, Bulgaria, and Georgia) had announced this decision a few weeks before the Council, citing different open and contentious issues that rendered their participation impossible. Interestingly enough, this happened although they had all agreed to participate in the planned Council during the last official pre-conciliar Synaxis of the Primates of the autocephalous Orthodox Churches in Chambésy, Switzerland (21-28 January 2016). The churches present in Crete tried to downplay the importance of perfect attendance and unanimity ←7 | 8→and to promote the many positive sides of the gathering, while those staying at home portrayed the Council as incomplete, lacking a Pan-Orthodox character. The direct or indirect role of the Moscow Patriarchate as forming the leading pole of opposition to the Council and trying to stop or delay the entire conciliar process should be emphasised here. The future of a united global Orthodox Church seemed even bleaker than before.

Is it then legitimate to call this Council a Pan-Orthodox one? No doubt, the absence of four churches denied its status as Pan-Orthodox in the strict sense of the word. However, the Council was conceived and scheduled to be a Pan-Orthodox one from the very beginning. It is thus no wonder that it was constantly termed “Pan-Orthodox” on various occasions in numerous documents, official announcements, and discussions preceding the Council of 2016. Also the fact that the above four churches participated regularly in all preparatory stages, attended all the preconciliar meetings, and worked together on the preliminary documents attests to the basic Pan-Orthodox character of the Council. The same holds true for the aftermath of the Council, as these four Churches have received the documents finally approved in Crete so that they may respond to them. It is thus possible that the eventual broader reception of the Council may render it truly Pan-Orthodox at a later stage. For all these reasons, even if de jure and de facto we cannot speak of a Pan-Orthodox Council in the strict meaning of the term, it is hard to avoid acknowledging its Pan-Orthodox dimension and significance, especially considering the decades-long pre-conciliar process.

Even so, the developments in the aftermath of the Council have confirmed the fragile condition of Pan-Orthodox unity. Emboldened by the success of the Pan-Orthodox Council, which strengthened its related legitimacy, the Patriarchate of Constantinople two years later replied favourably to a request by the Ukrainian Parliament and President Petro Poroshenko to investigate the possibility of reorganising the Ukrainian Orthodox Church structure – much to the chagrin of the Russian Orthodox Church, which claimed to be the only canonically legitimate actor in Ukrainian Orthodoxy. Constantinople’s investigation led to a re-appraisal of a historical document from 1686, with which Constantinople had transferred the right to designate bishops in the Kievan Metropolis to the Moscow Patriarchate. In fact, Constantinople had de jure kept the canonical jurisdiction over Kiev, designating the decision of 1686 as a temporary one. In other words, this decision had been underlined by the historical conditions of that time and could be revoked under new circumstances.2